Professor Peterson is not PC

On September 27, 2016, a star was born. On that date, Jordan B. Peterson, a psychology professor at the University of Toronto, posted a video to his YouTube channel condemning political correctness. In particular, he criticized Bill C-16 which added gender expression and identity to federal human rights legislation as well as to hate propaganda provisions of the Criminal Code. The video soon received thousands of views and catapulted Peterson into the vanguard of opposition to political correctness in Canada.

The political correct view he was opposing was that of calling people by made up pronouns like “ze” and “vis.” He refused, absolutely, even though, under Bill C-16, which passed in June, that may get him in real trouble. His stand was not popular among the fashionable left and many academics and political activists were and are demanding that Jordan Peterson be silenced and punished. Opposition to political correctness is very politically incorrect.

A short book about Peterson and the controversy he has generated was published earlier this year. Written by Richard West, the book is entitled: An Unauthorized Biography of Jordan B. Peterson: How Toronto Psychology Professor Jordan Peterson Established Himself as an Opponent of Political Correctness. 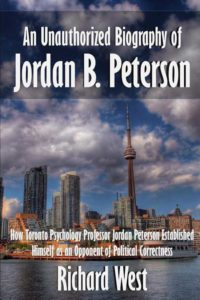 Jordan Peterson was born in Fairview, Alberta, and lived there until he went to college. As a teenager, Peterson became close friends with his local Member of the Legislative Assembly, Grant Notley. Notley was the leader of the provincial socialist party, the Alberta New Democratic Party (NDP). Peterson became an NDP activist and got to know Grant Notley’s daughter Rachel, who would later become Premier of Alberta.

Peterson was brought up in a Protestant church-going home, but he abandoned Christianity because he could not reconcile the Bible’s account of Creation with Evolution. He subsequently developed a keen interest in books and politics. West writes:

“At thirteen, he started reading serious political books. Authors of interest included Ayn Rand, Aleksandr Solzhenitsyn, and George Orwell – three authors who warned against the evils of collectivism and totalitarianism.”

Reading and studying politics eventually caused him to see through the false promises of socialism. As West puts it:

“His faith in socialism specifically and ideology generally was finally undone by George Orwell’s book, Road to Wigan Pier. The book impressed upon him the possibility that socialists were those who hated the rich – not those who loved the poor.”

After high school Peterson attended Grande Prairie College where he studied Political Science. However, he became increasingly interested in Psychology and headed ot the University of Alberta, graduating in 1984 with both a B.A. in Political Science and a B.A. in Psychology. Then it was off to McGill University, where he received his PhD in clinical psychology in 1991.

Peterson was very successful in his academic career and became a visiting professor at Harvard University in 1993. He remained at Harvard for five years and then took up his current position at the University of Toronto where he became quite popular. West writes:

Peterson’s success included publishing dozens of academic papers and appearing on TVO (originally known as TVOntario) numerous times. In 2013 he began posting videos of his lectures on YouTube. His videos received many views, likely mostly from students.

In March 2016 he made a short video asking viewers to financially support his work through Patreon, a crowdfunding platform. Support began to trickle in, but it soared after he began attacking political correctness. By July 2017, the Toronto Star reported he was receiving over $45,000 per month from crowdfunding alone.

As mentioned, at the end of September 2016, he released his now famous video criticizing Bill C-16. With this law, refusing to refer to people by their preferred pronoun (e.g. “ze,” “vis,” “hir”) could be considered a form of discrimination and harassment. West notes:

“Peterson made it clear in his video that he would not comply with requests that he use the preferred pronouns of individuals including transgendered persons. He acknowledged that not only would not using someone’s preferred pronouns be considered discrimination under the new human rights legislation, but it would also be deemed a form of hate speech.”

This video soon received tens of thousands of views and captured the media’s attention. Many people supported Peterson’s views but the academic establishment and the University of Toronto administration were outraged.

Early in October, the chair of the university’s Department of Psychology wrote a letter to Peterson stating, “I wish to remind you that in your activities as a University of Toronto faculty member you are expected to comply with applicable human rights law.” Opposing the compulsory acceptance of transgender pronouns was seen as a potential violation of “human rights.”

Later in October, the Dean of the Faculty of Arts & Sciences and the Vice-Provost of Faculty and Academic Life sent him another letter to ask him to use “non-binary pronouns.” It also suggested – ominously – that failing to toe the party line could undermine his ability to fulfill his job.

Peterson suggested that a public debate over the issue be held. This suggestion was resisted by faculty members such as Physics professor A.W. Peet who said, “Gender identity of real life people is actually not up for debate.”

“I regard these made-up pronouns – all of them – as the neologisms of radical PC authoritarianism. I’m not going to be a mouthpiece for language that I detest.”

Peterson’s public and uncompromising opposition to transgender pronoun police has garnered considerable public support. His willingness to continue his fight in the face of frequent accusations of “hate speech” and “intolerance” has made him a hero to many people. Clearly, he is a man to be admired. As West puts it:

“Dr. Peterson’s refusal to use state-mandated pronouns is a form of civil disobedience, and his willingness to risk his career and reputation has made him a powerful advocate for free speech in Canada.”

In fact, West sees Peterson’s widespread support as being situated within a larger cultural phenomenon:

“Dr. Peterson’s work seems to be part of a broader trend in North America and Europe, whereby voters are reacting against excessive political correctness.”

Peterson continues to appear in YouTube videos discussing a wide range of topics. His perspective is deeply informed and usually conservative. However, he is not a Bible-believing Christian and therefore gets some important things wrong. He doesn’t think, at least at this time, that abortion should be made illegal.

But it’s also important to note that it is not his abortion position for which he is being attacked. It isn’t on what he is getting wrong, but on what he has gotten right that he is the target of so many.

Jordan Peterson represents an important form of resistance to the leftwing cultural and political juggernaut. His leadership inspires others to stand against the tide, and Peterson provides his supporters with well-thought-out reasons to oppose politically correct attitudes and beliefs. He has considerable credibility due to his academic stature and cannot be “brushed off” as a fringe figure. Although he is not a Christian, his perspective on transgender pronouns parallels the Christian perspective (sex is binary), as does his opposition to political correctness generally, and therefore his cause is worthy of support.

Documentary 2018 / 139 minutes RATING: 8/10 In one of the documentary's many memorable moments Costi Hinn, the nephew of televangelist and faith...