The ordinary is extraordinary: Dr. Gordon Wilson at Creation Weekend 2018

During the Creation Science Association of Alberta’s Creation Weekend 2018, Dr. Gordon Wilson was the feature speaker, giving three lectures. This is an account of his second presentation.

While Dr. Gordon Wilson had entitled his presentation “The Magnificence of the Mundane” he wanted us to note that the words in the title are actually contradictory. While the word “magnificence” communicates excitement, the term “mundane” suggests that something is boring or dull.

But what he wanted to share with us is that God’s “ordinary” work in creation is amazing, displaying God’s wisdom and finesse (Ps. 104:24). And in this context, we are told that King Solomon – full of wisdom – spoke about trees, herbaceous plants, beasts, birds, reptiles and fish (1 Kings 4:33).

It is evident, declared Dr. Wilson, that one place to observe God’s wisdom is in nature. Similarly if one wants to be an expert on the Renaissance artist Michelangelo, one will endeavor to study his creative works in addition to any of his writings. Thus, said our speaker, biology is part of theology. It is the study of who God is, as an artist, engineer, and sculptor. In this context, Dr. Wilson discussed several organisms that might seem mundane or ordinary, but which are actually quite amazing. 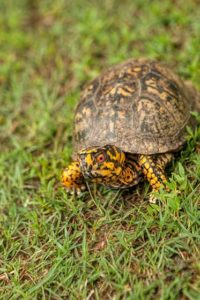 The eastern box turtle lives in the eastern half of the United States. This animal may look quite ordinary (as turtle appearances go), but it has an amazing capacity to survive cold winters. As fall gives way to winter, this reptile builds up high levels of glucose in its blood. This acts as a sort-of antifreeze which prevents ice crystals from forming in its cells (ice is allowed to build up in the turtle’s body cavity, but not in its cells where ice crystals would poke and rupture the membranes). With all this chill, the heart can even stop. But then, in the spring, when things start melting, the heart starts up again and the turtle goes about his normal life activities.

In keeping with Dr. Wilson’s theme of looking at everyday creatures, what could be more ordinary than houseflies? It turns out, however, that these organisms have quite an interesting way to escape from the confining walls of their pupal stage.

It so happens that there is a trapdoor of sorts fashioned in the skin on the face of the developing fly. Muscles in the abdomen push blood vigorously into the head. This blood fills an inflatable bag, which in turn pushes open the trapdoor and then bulges out from the face. This bag, called the ptilinum, exerts pressure on the puparium– the cocoon-like structure formed from the maggot skin which houses the pupa as it develops into the now-emerging adult. The puparium also has a weakened seam that cracks under pressure from the ptilinum. The now-adult-fly pushes out through the opened seam, and afterwards the blood-filled ptilinum empties, and retreats back into the body, and the trapdoor in the fly’s head closes back up.

Then, behold, we see a normal fly descending on our hamburgers!

More showy are the hunting habits of the Bolas spiders. These creatures, which look like bird droppings (for purposes of camouflage), share many characteristics with ordinary orb weaver spiders, and can be found throughout the eastern United States down to Chile. At night these spiders – looking every bit like cowboys swinging a lasso – hang from a leaf and swing their “bolas,” a thread with a glob of sticky glue attached to the end.

This amazing spider secretes a very special organic molecule: the scent of a particular female moth. This compound, called a pheromone, acts like a perfume to attract male moths of the same species. The spider deftly swings its bolas and hits the incoming male moth, penetrating his scales. The spider then hauls in her pretty and wraps it up in silk. This spider is even able to vary the chemical composition of the pheromones in order to catch another moth species. The ability of the spider to imitate such elaborate pheromone designs demonstrates that these spiders possess remarkable synthetic abilities that could never have developed by trial and error. Magnificent indeed! And certainly not mundane.

Dr. Wilson also discussed spore dispersal in ferns, mosses, and in a fascinating little fungus called Pilobolus. This little fungus grows on the dung of animals like horses and cows. The entire fungus is only about 1 centimeter tall, but it consists of a short stalk with a bulging balloon-like area above, topped by a black cap which shelters many fungus spores. The bulgy area focuses light onto carotenoid pigments in its base.

The bulge, with cap on top, grows straight sideways towards the incoming morning light. Pressure builds up in the bulge so that the cap is shot off at high pressure.  Full of spores the cap lands and clings to grass about 2 meters away from the manure. Then along comes a grazing animal. The fresh grass looks good enough to eat and, once inside the animal, the spores proceed through the digestion system without germinating. Once deposited outside in another dump of manure, more miniature Pilobolus specimens grow to start the process all over again.

These examples demonstrate wonderful design and fascinating ingenuity. Yet there are taken from everyday life. The “ordinary” around us is extraordinary!

Dr. Wilson concluded with the admonition that we should observe Creation and ponder that God made it. God did not give us all the answers. He wants us to explore. As we read in Proverbs 25:2 “It is the glory of God to conceal things, but the glory of kings is to search things out.”

This article first appeared in the March 2019 issue of “Creation Science Dialogue” and is reprinted here with permission. Dr. Margaret Helder is the author of “No Christian Silence on Science.” Dr. Gordon Wilson has recently completed a nature documentary called “The Riot and the Dance.”

Lorie Smith: another Christian battling to preserve a freedom we all need to use more often