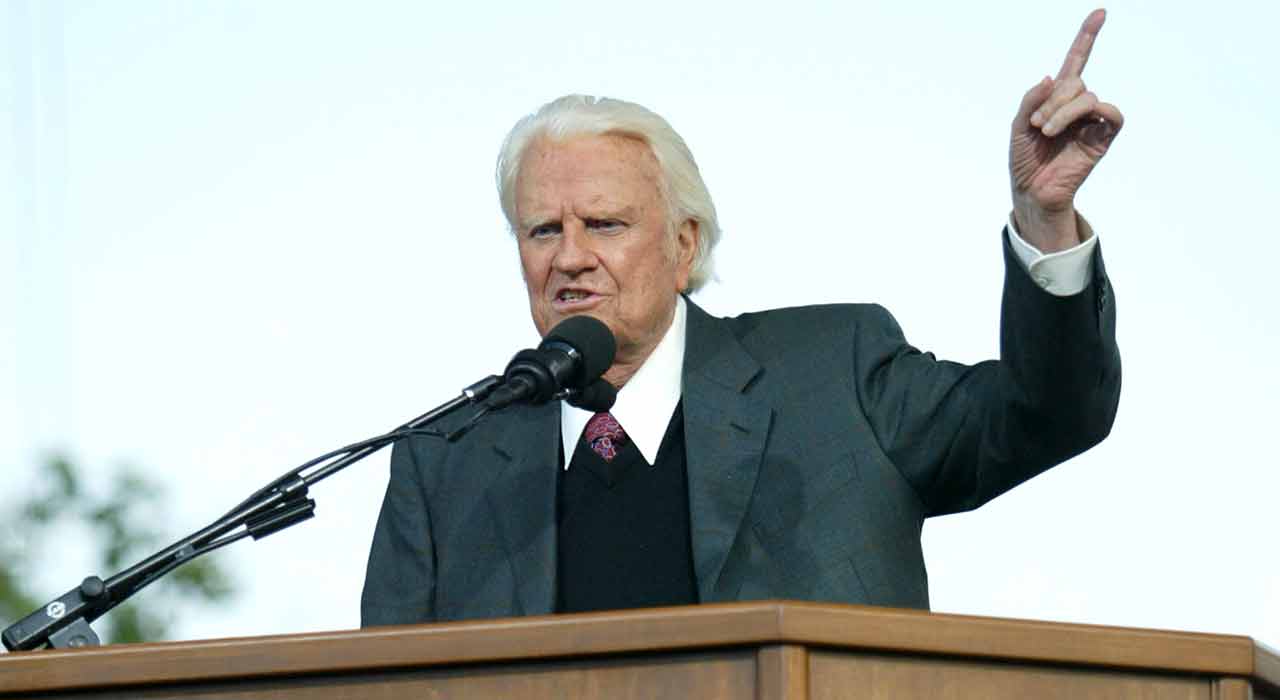 Without a doubt, Billy Graham has had a huge role in shaping American Christianity. His death on February 21, 2018 signals the passing of an era. American revivalism was a movement of spiritual wakening that began in the 1700s with Jonathan Edwards and George Whitefield. It carried on with celebrity preachers like Billy Sunday and Dwight Moody – but it really reached both its climax and end with Billy Graham.

He was born and raised in a Christian home. His parents were members of the Associate Reformed Presbyterian Church. His wife Ruth was also a Presbyterian. He dates his conversion to 1934, when he was sixteen years old. Billy Graham says his conversion happened during an evangelistic campaign. Before he became a full-time evangelist, he served as a pastor of two churches and was also the president of a Bible College. By this time, he was a member of the Southern Baptist Church. Many Southern Baptists are monergistic in their doctrine of salvation (believing that salvation not a cooperative act between the Lord and Man, but rather the work of God alone) but sadly, Billy Graham was not.

Let’s be up front with this fact: Billy Graham was an Arminian. The “Statement of Faith” of the Billy Graham Evangelistic Association signals this clearly when it says: “…repentance of sin and faith in Jesus Christ results in regeneration by the Holy Spirit.” Rather than regeneration resulting in faith (the biblical view found in Reformed theology), the BGEA says faith results in regeneration. First you believe (using your free will) and then you are born again. Regeneration follows faith, rather than preceding it. That’s Arminianism and it was also evident in Graham’s 1977 book, How to be Born Again. Ever since that book was published, Reformed critics have pointed out that you can’t lay out steps for people to follow to be born again – regeneration is a sovereign work of the Holy Spirit who works this, as the Canons of Dort say, “in us without us” (CoD 3-4.12). Telling someone how to be born again is just as absurd as telling a baby in the womb how to be born.

Graham began doing evangelistic work in about 1944. The first few years were spent in obscurity in the United States and England. But this changed dramatically in 1949. It happened in Los Angeles where Graham was doing a series of revival meetings. William Randolph Hearst was the head of an American newspaper chain. Somehow word about Graham reached him. He liked what he heard. Graham was patriotic and young people were attracted to him. Hearst was also an American patriot, and because this was the time of the Cold War, he was deeply concerned about the communist threat from the Soviet Union. He saw Graham as a figure who would encourage and support American values. Graham could be helpful in shielding America from the Soviet Union’s plans to dominate the world. Hearst sent a two-word telegram to all his newspapers to “puff Graham.” And they did. Newspapers all over the United States were covering Graham’s crusade in Los Angeles. He soon appeared on the cover of leading American news magazines. His crusade in Los Angeles was planned for three weeks, but because of the news coverage, Graham extended it to eight. And this is where the story of Billy Graham’s celebrity status begins.

In 1950, he started the Billy Graham Evangelistic Association. The Association started organizing crusades around the world. It also started a radio broadcast called “The Hour of Decision,” and eventually that led to his appearance on television as well. When I was a boy, I can remember watching the Billy Graham crusades on television sometimes. I grew up in a church of Dutch immigrants and I wasn’t used to hearing a preacher without a Dutch accent. He preached clearly. He often had a Bible in his hand, and he seemed to be preaching about what the Bible says. Billy Graham was a skilled communicator. He was simply a preacher, a man who preached with sincerity and seriousness.

Over the years, Graham did over 400 crusades in 185 countries. His largest event ever was in Seoul, South Korea in 1986 where one million people attended a single crusade evening. His last crusade was in 2005. Through television and radio, he has preached to millions of people. Consider this fact: more people have heard Billy Graham preach than any other single preacher in the history of the world. That’s amazing.

So what were some of the features of Billy Graham’s revival ministry? He preached for individual decisions for Christ. Following in the footsteps of revivalists before him, public relations campaigns were crucial. So was getting the sponsorship of local churches. Graham also made efforts to involve churches by having them send volunteers for his crusades. They would work as counsellors and in other capacities. Local churches would also be involved with follow-up. Billy Graham wanted to make sure that the people who made decisions would be contacted by local churches soon afterwards. Graham even said this was the most important aspect of his work.

This became controversial in the late 1950s because of who he was working with. He worked with evangelical churches, but he also worked with the large mainline churches that were friendly to liberal theology. Converts from his crusades would be directed to become members of these liberal gospel-denying churches. That caused many fundamentalist Christians to become angry with Graham.

Carrying on the tradition of previous revivalists like Dwight Moody, another important feature of the Billy Graham crusades was the music. Especially at the “moment of decision,” it was important to have the right music played and sung by skilled musicians. Billy Graham had a long-standing relationship with George Beverly Shea. Shea began working with Graham in 1947. Shea would sing a solo before Graham gave his message. That was to prepare the crowd to receive his words. After the message, however, Shea turned the singing over to the choir. They would sing the well-known hymn “Just As I Am” and people would be invited to come forward and make their decision. The music set the mood.

The end of an era

Billy Graham retired from active ministry in 2006. Since then, there hasn’t really been anyone to replace him in American revivalistic evangelism. His son Franklin has done some crusades, but he’s not as popular as his father was. The phenomenon of revivalism appears to have run its course. Revivals as big events with preaching and music can hardly compete with television, movies, and the Internet. With Graham’s death, the era of American revivalism definitely seems to have drawn to a close.

This post is reprinted with permission from Dr. Bredenhof’s blog, Yinkahdinay. The picture is from Shutterstock.com.

Quotes by and on Graham

“Millions of people were intensely charged over segregation, and any preacher defying the color line in the South in the 1950s was exposing himself to physical harm and even death….The story is told… of how at one of his early 1950s crusades, Graham asked the head usher to take down the ropes used to segregate blacks from whites. The usher refused. So Graham walked down off the platform and took down the ropes himself. I don’t care what you say, that’s courage right there.”

On staying free of scandal

“We all knew of evangelists who had fallen into immorality while separated from their families by travel. We pledged among ourselves to avoid any situation that would have even the appearance of compromise or suspicion. From that day on, I did not travel, meet or eat alone with a woman other than my wife. We determined that the Apostle Paul’s mandate to the young pastor Timothy would be ours as well: “Flee … youthful lusts” (2 Timothy 1:22, KJV).”

– Billy Graham on what would come to be known as the “Billy Graham rule” that he and his ministry team crafted back in 1948 in Modesto, California.

“Someday you will read or hear that Billy Graham is dead. Don’t you believe a word of it. I shall be more alive than I am now. I will just have changed my address. I will have gone into the presence of God.”