Imagine a vast, underground series of zigzagging passageways covering an area several miles in length, 590 acres in size. Ponder the amount of work that was required to dig down between 2 and 60 feet deep into volcanic tuff rock in order to create these passageways and the loculi (burial niches) that lined the sides of them. In an ancient time period when graveyards were not permitted within the city limits of Rome, the catacombs were created for the burial of Christians, Jews, and some pagan individuals.

The catacombs are thought to have held between four and seven million graves. Between 40 and 60 multi-level burial chambers connected by numerous tunnels have been discovered just outside of Rome.  Narrow steps go down as many as four stories, leading to passages that are about 8 feet high and 3 or 4 feet. The burial niches were carved into the walls and are generally 16-24 inches high and 45-60 inches long.

And it is here, in these catacombs, where we can find the earliest known examples of Christian artwork.

During the second century, the traditions of the Romans and Etruscans favored cremation, but the Christians, believing in the bodily resurrection of the dead, thought that bodies of the deceased should be buried, as was the described manner within the Old and New Testaments of the Bible. Because of that, and because it was inexpensive, Christians dug these catacombs, generally beginning on the property of one of the Christians, digging downward and then branching out in many directions. Imagine starting such a project in your back yard!

The Christians definitely expanded the number of catacombs, and were known to hold funeral services in small chapel-like rooms, similar to how people hold graveside services today.

We can learn a lot about the people who expressed their faith artistically in the catacombs. It is especially uplifting to note the particular themes and symbols that were chosen, as well as noticing those that were not. 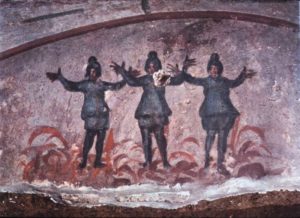 This fresco painting of Shadrach, Meshach and Abednego in the fiery furnace (Daniel 3) is found in the Priscilla catacombs in Rome and is dated to around the third and century.

It is also interesting to consider that whereas some religions, such as the pagan worship in Egypt, provided artwork within their burial places for the use of the deceased along the way to the afterlife, Christians provided artwork for the encouragement of the living who would visit the catacombs. Christians’ souls were already in Heaven, but the bodies awaited the great resurrection at the day of judgment.

The types of artwork found in the catacombs include fresco paintings (paintings done on wet plaster), Greek and Latin inscriptions, carved stone burial boxes (sarcophagi), and statues. Some of the artwork is simple and amateurish, but in other cases it’s clear Christians hired professional artists to decorate the graves of their loved ones with the purpose of advancing the message of Christ. The people who could afford it placed the body of a loved one in a stone sarcophagus that was most often decorated, but those who were poor simply bound the body up in linen. It was then placed in the loculi– the burial niche – and the niche was sealed with a slab that bore the name, age and date of the person’s death.

Catacombs historians state that there are three themes that are seen throughout the catacombs’ artwork: resurrection, salvation, and baptism, which Andrew Shubin in Early Christian Imagery in the Catacombs of Priscilla refers to as the “three core tenets of Christianity.” Another catacomb art historian, Gregory S. Athnos, states that:

Every story in catacomb art is a tale of deliverance, a tale of the powerlessness of death and the certainty of the resurrection. God delivers us from the consequences of death situations and gives us life instead. In our view of the history of Christian art it appears the crucifixion of Jesus holds the highest place.”

In these figures of Noah in the Ark, Moses striking the rock, Job on the dunghill, the Miracle of Cana, the feeding of the five thousand, Lazarus leaving the tomb, and most prominent – Daniel in the lions’ den, Jonah cast out by the whale, the three Children in the furnace. All these are types of martyrdom – martyrdom by beasts, water, and fire, but all symbolical of triumphant martyrdom such as is necessary to depict in order to maintain courage and console grief.

And, amazingly he points out the following:

We see no trace of contemporary persecutions, no representation of the butchery of the Christians, nothing bloodthirsty, nothing which could rouse hatred or vengeance, nothing but pictures of pardon, hope, and love. 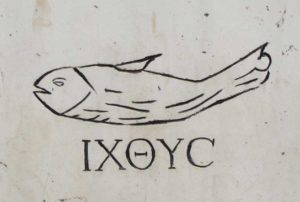 A fish carving from the Domitilla Catacombs in Rome, dated to around second or third century AD. The letters below spell fish in Greek (ichthys) and can also be used to form an acronym of the phrase “Jesus Christ, Son of God, Savior.”

In this regard, Athnos points out that he saw “no crosses in the catacombs – no symbols of death. Rather, he saw symbols of the Resurrection such as the Phoenix, a bird which came back to life, and the fish, which speaks of God’s provision and sustenance, as well as a reference to Jesus’ calling his disciples to follow Him and become fishers of men.

Other researchers describe pictures of a dove, representing the coming of the Holy Spirit at Pentecost to dwell within Christians and bring them guidance, wisdom, peace, comfort, and joy. Another frequent symbol was the anchor, representing hope in Jesus as expressed in Hebrews 6:19, “We have this hope as an anchor for the soul, firm and secure.” Although Athnos saw no crosses, other researchers point out that when the anchor is turned upside down, the Greek letter TAU was formed and the T represented the shape of the cross, promising salvation through Jesus’ crucifixion and resurrection.

Last of all, the symbol of a peacock was adopted for use by early Christians. It had long been a symbol of eternal life for other cultures, who feared death and their unknown future; Christians improved on it, believing that the victory of Christ’s resurrection canceled the obscurity of death.

One subject that was frequently repeated in statuary was that of the Good Shepherd. The Old Testament book of Psalms, Chapter 23, begins with, “The Lord is my shepherd, I shall not be in want.” The Psalmist describes how this good shepherd watches over his sheep by taking them to green pastures with quiet, not frightening, streams of water, and providing comfort for them in every dangerous situation. “Even though I walk through the valley of the shadow of death, I will fear no evil, for you are with me; your rod and your staff, they comfort me.” Jesus announced Himself in John 10:11-18 as the Good Shepherd who would lay down His life for His sheep; this reference would have brought Psalm 23 to His disciples’ minds. It brought great comfort to the souls of early Christians to believe in Christ as their good shepherd.

There were also pictures found of the Virgin Mary, of a person praying in Orant style (arms uplifted), and of the disciples and other early saints and martyrs of the Christian faith. These, too, served to encourage the living by referencing the power and love of God and the witness of other believers. There are also depictions of Jesus performing His many miracles, but these aren’t the earliest pictures, as the first Christian arts were seemingly more reluctant to depict Him than later ones.

DID CHRISTIANS HIDE IN THE CATACOMBS? 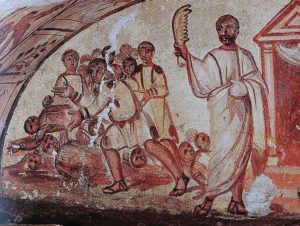 A catacomb fresco painting of Samson with the jawbone of a donkey (Judges 15). Photo credit: Isogood_patrick / Shutterstock.com

Many of us have heard references to the Roman persecution of Christians which took place during the first three centuries after Christ. Ministers have often called on us to imagine the difficulties which led many Christians to hide from the Romans down inside of the catacombs.

However, some modern historians dispute whether the catacombs were used as a hiding place, and one source even questioned whether there really was a great persecution! These writers call the ideas tradition, myth or a romanticizing of what actually occurred. Note the following arguments and responses:

Also consider, since the artwork was intended to encourage people who were living in dangerous circumstances, those who painted and sculpted it did expect that it would be viewed by others; this lends credence to the idea that some Christians would be coming there sometime.

The catacombs outside of Rome served as an extensive underground burial location around the second century. The Christians who dug some of them held funeral services within the small chapels there, and some hid there to avoid persecution.

They expressed their faith in salvation through Jesus Christ by painting or sculpting symbols of Christianity and references to carefully chosen Biblical accounts that would particularly instill courage, faith, hope, and trust within those who viewed them. Hebrews 12 sums up the encouragement that the early Christians passed on to others through their artwork in the catacombs:

Therefore, since we are surrounded by such a great cloud of witnesses, let us throw off everything that hinders and the sin that so easily entangles. And let us run with perseverance the race marked out for us, fixing our eyes on Jesus, the pioneer and perfecter of faith. For the joy set before him he endured the cross, scorning its shame, and sat down at the right hand of the throne of God.  Consider him who endured such opposition from sinners, so that you will not grow weary and lose heart.

All online resources were last accessed on April 15, 2015.

This article first appeared in the January 2016 issue under the title “Artwork in Rome’s Catacombs: Early Christian art was created to encourage fellow Christians.”