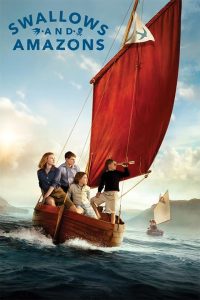 I remember my older brother reading Arthur Ransome’s Swallows and Amazons to me when I was very young, and being charmed by it. It was a story of four children – two brothers and their two sisters – making up their own adventures during a summer holiday on the lake, fighting off imaginary pirates and pretend sharks. It was a gentle book.

That’s why I thought it would make for a gentle movie to share with the family. But while a lot of the book’s charm made it to the silver screen, the filmmakers decided that in addition to the children’s imagined peril, they had to add some of the real kind – spies!

The four Walker children are on a lake for the summer, in 1935 Britain, and they have their parents’ permission to take the Swallow, a small sailboat, out to explore a densely wooded island and camp there. But they are not the first to land on the island: a sign, surrounded by animal bones, warns that it belongs to the “Amazons.” This is all loyal to the book – the Amazons are a couple of girls with a sailboat of their own, and the two groups get to pretend to be rival pirate gangs. But the island is also home to a real life spy. And there are a couple of other suspicious sorts following him. For a small little island, there’s quite the population on it!

The additions of the spies adds to the excitement, but brings tension to a story that didn’t really have that before. So, if you like the book, you probably aren’t going to appreciate this adaptation – it’s like adding a couple of spies to Winnie-the-Pooh. Exciting, yes, but not at all in keeping with the spirit of the original story.

However, if you don’t know the book, or can at least forget it for a bit, this is quite the adventure. There are chases scenes on the water and through the woods, and even through and on top of a train. We see spies following each other, Walkers following spies, and spies following the Walkers. I don’t want to give the impression this is all action – there’s also the calmer fun of the Walkers learning how to camp, create fire, and catch and cook their own food. It still has the charm of the book.

There is a bit of language, with one spy saying “Damn it” in his native language, and the movie not so helpfully subtitling the translation for us. The siblings also call each other various names including “duffer” and “idiot.” And one girl says, “shut up” a number of times.

The only other concern would be some behaviors that we wouldn’t want our own children to model. There are a few times where the children do something hazardous (like sailing a boat at night) against their mother’s expressed wishes. So mom and dad might have to pause the movie here and there to ask what the Walker children should have done.

While Swallows and Amazons was far too scary for my 8 and under young’uns, I think some 10-year-olds and anyone 12 and up would find this just the right level of exciting for them. It’s great movie night material for families with older children, and it’s bound to inspire either a camping or sailing request.