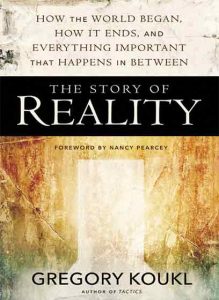 The Story of Reality: How the World Began, How It Ends, and Everything Important That Happens in Between
by Gregory Koukl
2017 / 198 pages

It’s a book written with two main types of readers in mind. It’s for Christians who are struggling for answers to the big questions that come with the Christian faith. It’s also written for unbelievers who are open to considering the claims of the Christian faith. For both readers (and others), I think Koukl has something powerful to offer.

The Story of Reality is a basic overview of most of the key elements of a Christian worldview. When I say it’s basic, I mean that it’s not written at a highly academic level. A high school or college student should be able to manage it.

However, behind the basic level of communication, one familiar with the issues will recognize that Koukl is no slouch. The deeper stuff is in his grasp, but he has distilled it into something readily understood.

A story but not fiction

The concept of “worldview” is increasingly being criticized in Christian circles as something created by modern philosophy. Perhaps it’s for this reason that Koukl recasts the notion in terms of a story. In this story, there are characters and there is a plot. The main characters are God and man. The plot involves creation, fall, redemption, and restoration. But unlike other stories, the Christian story (laid out in the Bible) is objectively true — it is reality. Koukl addresses other competing “stories” such as:

He critiques these stories and shows how they’re inadequate for explaining the state of things as we see them. He then also provides ample argumentation to illustrate that it’s only the Christian story (or worldview) that can be true. Christianity is true because of the impossibility of the contrary.

Readers familiar with Reformed presuppositional apologetics will recognize what Koukl is doing. His method is generally in that school. As I’ve noted before (in my review of his previous book Tactics), Koukl is a student of Francis Schaeffer, who in turn had been a student of Cornelius Van Til. Van Til was one of the pioneers of Reformed presuppositional apologetics. One of the key features of that school is a commitment to the place of Scripture in apologetics, not only as a foundation, but also as part of the actual method. Similarly, throughout The Story of Reality, Koukl is constantly either quoting or, more often, paraphrasing the Bible. This is highly commendable!

This is not to say that Koukl is always consistently in the Reformed school of apologetics. There are a couple of places where I put some question marks. In chapter 21, he discusses faith. He correctly notes that faith, in itself, does not save. Rather, faith is the instrument through which we are saved. Then he writes this:

“This is why reason and evidence matter in the story. It is critical to get certain facts right. Put simply — reason assesses, faith trusts. That is the relationship of reason to faith. Reason helps us know what is actually true, leading to accurate belief. Faith is our step of trust to rely on what we have good reason to believe is so.”

There is some truth in this. You can say that faith needs and uses reason as a tool. However, there are also important limits to this. Above all, the unregenerate mind misuses and abuses reason because of sin. Unregenerate reasoning is not going to assess facts correctly. Deadened by sin, reason does not help you know what is actually true.

Moreover, even when regeneration comes into the picture, human reason is going to run stuck with certain pieces of the Christian worldview (or story). Think of the Trinity. Reason assesses that doctrine and says, “Sorry, it doesn’t make sense.” Does faith then stop trusting? Faith has reasons for believing in the Trinity, but those reasons come down to the faithfulness and reliability of the One who revealed it to us, not the logical self-evidence of it.

There were a few other questionable statements. In this blog post, I interacted with his suggestion on page 51 that the Big Bang is compatible with Genesis. In chapter 11, he opines that the Bible teaches that animals have souls. The biblical evidence offered for this is debatable.

One addition would have been good

I also want to draw attention to an omission. The subtitle tells us that the book will tell us “everything important that happens in between” the beginning and the end. But in Koukl’s story, an important part is missing. It’s the part where the lives of believers are transformed by the gospel. It’s the part where the Holy Spirit works to change us and make us into new people who take every thought captive for Christ in every area of life. I was hoping to read at least a paragraph, preferably a chapter, about that vital and wonderful part of the Story. It’s incomplete without it.

A book worth buying for – and reading with – a friend

Despite my criticisms, overall this is a well-written and well-argued book. Koukl deftly anticipates questions and objections. He uses helpful illustrations. The chapters are of such a length as not to be intimidating.

If you know an unbeliever who is showing interest in the faith, I’d suggest buying two copies — one for yourself, and one for her or him. Offer to read it together and discuss it. You’d for sure find yourself enriched and, who knows, perhaps it would be God’s instrument to work faith in the heart of your friend too.

For 5 great quotes from “The Story of Reality” click here. Dr. Bredenhof blogs at Creation Without Compromise and Yinkahdinay where this article first appeared. It is reprinted here with permission.

Gender is fluid until you bring up this... (2 min) It's becoming the norm to pretend that men can become women and vice versa. And some are up for pr...