Tactics: a game plan for discussing your Christian convictions 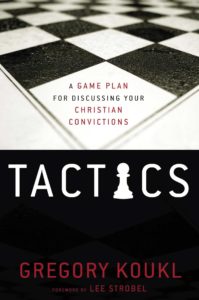 What would you do? You’re in a public place and you encounter a woman with a pentagram hanging on a necklace. Maybe it’s a fellow student at university. Perhaps a neighbor. You see this pagan five-pointed star and what would you say? For most of us, we probably wouldn’t say anything at all.

But that would be a missed opportunity, according to author and apologist Greg Koukl. When Koukl encountered a store clerk with a pentagram pendant, he used the moment to ask some key questions of the young woman. His well-placed questions challenged her to think about her way of looking at the world.

Koukl’s book Tactics teaches how to use the same method in all kinds of circumstances. Koukl wants to help Christians learn to share their faith in a winsome and Christ-like manner. He wants us to be confident in promoting the Christian worldview and its values.

An upgrade on what I had

For some years I’ve been teaching my pre-confession students a short unit on apologetics, teaching them how to defend and promote the Christian faith. I don’t just want to them to know what they believe; I also want them to know why they believe it. They should be equipped to deal with people who don’t believe and who might challenge them on their faith. For this apologetics unit, I’ve been using Richard Pratt’s Every Thought Captive as a textbook. Pratt’s book is good in many ways, but I’ve been looking for something better. Koukl’s Tactics recently came across my desk and I thought I might explore that as an alternative.

At first I was skeptical. I’ve explored other options over the years, some even from Reformed authors, and I’ve been disappointed. So far as I know, Gregory Koukl isn’t a confessionally Reformed fellow, so how could this possibly work out as my new apologetics textbook? After all, I believe it is crucially important for our apologetics to be grounded in our Reformed theological convictions.

Well, what a surprise! If Koukl isn’t Reformed, his approach sure sounds Reformed in most places. As mentioned above, he teaches readers to ask carefully crafted questions. He calls this the “Columbo Tactic,” after the famous bumbling-but-very-effective TV detective. These Columbo questions are meant to dissect the unbeliever’s worldview and poke holes in it so that they see that their worldview is incoherent and inconsistent. He wants us to help the non-believer see that even if they have a very nice house, it has no solid foundation. Anyone familiar with Reformed presuppositional apologetics is going to recognize the language and approach.

Besides asking well-crafted questions, Koukl also suggests a few other strategies. One of them he calls “Taking the Roof Off.” This involves getting into someone else’s worldview or argument and taking it for a “test drive” to see where it ends up. In the words of Proverbs 26:5, it is “answering a fool according to his folly.” In this excerpt, Koukl shows how that might work:

The story is told of an atheist philosophy professor who performed a parlor trick each term to convince his students that there is no God. “Anyone who believes in God is a fool,” he said. “If God existed, he could stop this piece of chalk from hitting the ground and breaking. Such a simple task to prove he is God, and yet he can’t do it.” The professor then dropped the chalk and watched it shatter dramatically on the classroom floor.

If you meet anyone who tries this silly trick, take the roof off. Apply the professor’s logic in a test of your own existence. Tell the onlookers you will prove you don’t exist.

Have someone take a piece of chalk and hold it above your outstretched palm. Explain that if you really exist, you would be able to accomplish the simple task of catching the chalk. When he drops the chalk, let it fall to the ground and shatter. Then announce, “I guess this proves I do not exist. If you believe in me, you’re a fool.”

Clearly this chalk trick tells you nothing about God. The only thing it is capable of showing is that if God does exist, he is not a circus animal who can be teased into jumping through hoops to appease the whim of foolish people.

What I appreciate most about this book is that it isn’t top-heavy with theory. Koukl provides the basic approach and then spends the greater part of the book illustrating how to use it. And he illustrates well. His writing is clear, concise, and enjoyable to read. I think my pre-confession students are going to love it!

Were there any issues or concerns? Let me mention one. In chapter 2, Koukl discusses the use of our minds and logic. A lot of what he says there is good and true. However, on page 32, he makes what he recognizes will be a controversial statement to some: “Therefore the mind, not the Bible, is very first line of defense God has given us against error.” This is because, he says, the mind is first in terms of the order of knowing things.

I know what he is trying to say, yet he seems to create a false dilemma between the Bible and the human mind when it comes to our knowing. For us to know rightly, we need to have our minds regenerated by the Holy Spirit and our thoughts guided by the Word of God. It’s not a case of either…or, but both…and. In the words of Psalm 36:9, it is in God’s light that we see light. Our thoughts are meant to follow after God’s thoughts.

Obviously I’m going to highly recommend this book to anyone else teaching apologetics, whether to young people or others. In school Bible classes or church catechism classes, this little book could add some extra punch to your instruction. Moreover, for anyone just interested in becoming better at sharing our Christian hope with others – which should be all of us – you need to read this book too.

How thinkers and activists redefined identity and sparked the Sexual Revolution by Carl R. Trueman 2022 / 187 pages Just how strange is this new ...

The Hobgoblins: a novel on John Bunyan

by Douglas Bond 2020 / 268 pages There are people who carry out such heinous acts and live such immoral lives that we’d think, surely they could...