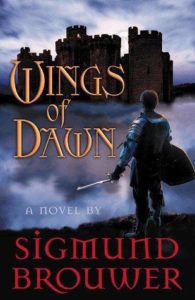 Why would anyone go through all the trouble of building an immensely strong castle in the middle of the North York moors in England? Why else but to hide a secret organization of intellectuals who are protecting the wisdom of past ages. The plot of this novel is based on the tension between two secret societies. The first group, the Druids, have their roots in early British history. Brouwer proposes that after the Druids were repressed by the Roman Empire they went underground and plotted to regain power. The second secret society grew from the first. According to Brouwer, Merlin was the best and brightest of the Druids and he was slated to bring the Druids back to power, but Brouwer’s legend has it that he was converted to Christianity by a simple priest. As a result of this conversion, he is said to have foiled the Druid’s plan and established his own secret society, the Merlins, to counteract the efforts of the Druids by using and conserving the knowledge of the Ancient Civilizations.

But now it is 1312 A.D. and after centuries of struggle, Magnus, the castle Merlin had built to carry on his struggle, has fallen under the control of the Druids. The only hope for the Merlins is a teenage boy who either carries the secrets needed to regain the ascendancy or has been turned to the Druid cause. This young man, Thomas, becomes the center of the conflict between the Merlins and the Druids. Always unsure of who he can trust Thomas conquers and loses Magnus. He is forced to flee from England to Palestine and is chased even there. He returns to England where the conflict even involves the king’s immediate family.

Although this is an excellent novel, Brouwer falls short on a few points. First, although Thomas’ uncertainty about who he can trust works well early in the novel it drags on much too much. The same questions are raised again and again about the same people even when they seem to have proven their loyalties earlier in the novel. Additionally, the characters that Brouwer develops lack depth. One finds the rough but noble knight, the fair lady, the wise old man, and the evil scheming villain. Even Thomas himself has that youth destined for glory feel, like some medieval Luke Skywalker.

Still, despite these failings, this is an exciting piece of historical fiction. In a historical sense, the accuracy with which Brouwer recreates the time and setting of the novel is excellent. Naturally, certain events are changed to reflect the existence of the Druids and Merlins but the book feels right, historically. Brouwer also provides chapter-by-chapter historical notes that explain how the novel could fit into history. Even the questions about who Thomas can trust, although they are overused, provide an “I can’t put the book down” level of tension for much of the novel.

However, the most gripping part of Wings of Dawn is the way that knowledge proves itself the true power. The secret Merlin and Druid societies take so many unexpected twists and turns in their pursuit of knowledge that all the reader can do is hang on and enjoy the ride.

As a Christian novel, Wings of Dawn very successfully manages to be solidly Christian in nature without feeling the need to scatter the pages with incessant sins and weaknesses or seemingly superficial conversions. Thomas begins the novel as a somewhat materialistic agnostic and he, as well as the other characters, has his weaknesses but they aren’t frivolously exploited for sensational reasons. He is soon converted to Christianity but his conversion is simple and believable. Really, when the book deals with overtly Christian themes, they are themes that one can identify with. One sees faith carrying Thomas through extreme trials but he experiences realistic doubts and shows realistic weaknesses.

In the final analysis Wings of Dawn is an excellent novel. Its sound historical background gives it an authentic feel. It provides an excellent level of tension and uncertainty and the twists and turns it takes keeps the reader guessing throughout. I would strongly recommend Wings of Dawn to anyone interested in an entertaining Christian novel.

This novel was originally published under the title Magnus.

[Editor’s Note: Brouwer has also expanded this story into a 4-novel series called Merlin’s Immortals and while four might be a bit too much of a good thing, it would have been a great series for school libraries, except that the 4th book was only ever made available as an e-book.]

A valley of conquerors

God’s work in one Reformed community to set prisoners free from their bondage to sexual sin ***** The fire crackled in a massive stone fireplace ...

The Truth & Reconciliation Commission’s Call to Action #64 is a challenge to Christian churches and schools… and the First Commandment **** ...