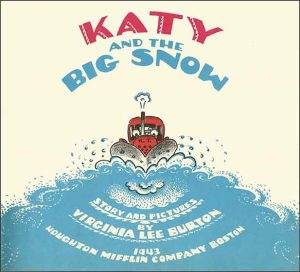 A mom reading Katy and the Big Snow to her daughters might remember her own parents reading the same book to her. Since they first came out in the 1940s, Virginia Lee Burton’s books have been enjoyed by three generations. These are classics!

But there’s more to the nostalgia, because even when they were brand new, they likely had a timeless feel because, rather than being about Burton’s present, they were a look back, celebrating a not-so-distant past that seemed calmer, simpler, better.

The idyllic yesteryear that Burton presents is just a bit before her own childhood, in the transition period between the late 19th and early 20th century. It’s a curious time to pick as the wistful pinnacle of civilization. It’s an age in which mechanization is already in place, so why is Mike Mulligan and His Steam Shovel worth celebrating, but the diesel shovels that followed are somehow threatening? But that is the pinnacle she picks, not only in Mike Mulligan and His Steam Shovel, but Maybelle the Cable Car, and then again in The Little House.

While these stories are all quiet laments at the technological advances that were revolutionizing the Western way of life, they are also a hubbub of activity, with all sorts of machines at work, and so much to see on every page. This busyness is then contrasted by the happy, calm conclusion to each story.

While it’s fun to take a peek at the past from someone who really appreciates the age she’s depicting, parents might remind their children of what the Preacher says in Ecclesiastes 7:10: “Say not ‘Why were the former days better than these?’ For it is not from wisdom that you ask this.” To romanticize the past can sometimes be to overlook the many blessings God is showering on us right now.

Burton’s four most popular are available separately and also in a compendium together. They are wonderful! 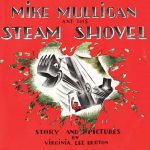 Mike Mulligan and His Steam Shovel

1939 / 48 pages
Mike Mulligan and his beautiful red steam shovel, Mary Anne, do a lot of digging in this story: cutting canals, lowering hills, straightening curves. But as technology advances, and new electric, diesel, and gasoline shovels come along, no one wants to hire a steam shovel. But instead of sending Mary Anne to the junkyard, Mike takes her to a small town looking to dig the cellar for their new town hall. He tells them that Mary Anne can do the job in a day, or they won’t have to pay him. The real fun here is not in finding out whether she gets the job done in time, but in the sweet way the story ends, with Mary Anne and Mike finding new jobs to keep them both busy. 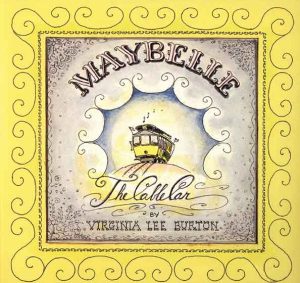 Katy and the Big Snow
1943 / 40 pages
A big red crawler tractor named Katy can push dirt in the summer, but when winter comes, she’s the only one strong enough to push through all the snow. When a “big snow” hits, and all the plow trucks get stuck, and the snow piles up to three feet, five feet, and even more, then it’s time for Katy to save the day. She clears roads for ambulances, fire trucks, the police, the mailman, the phone and electric company, and then even clears the runway for a plane that otherwise would have crashed. Katy saved the day!

Maybelle the Cable Car
1952 / 52 pages
Maybelle is a cable car who spends her days going up and down San Fransisco’s steepest streets, and she’s been doing so for decades. But now the city wants to do away with all the cable cars and replace them with big new buses. Will Maybelle be out of a job? No, because a campaign by citizens to keep the money-losing cable cars wins the day. Yay? What this presumes is that, so long as the majority says so, it’s okay to use tax dollars for non-necessities of all sorts, including wistful ones. Parents might have to talk their children through this one, to ensure little ones don’t walk away with that lesson.

Take it or leave it

Fun to read once or twice, these don’t need to make the cut for personal or school library shelves. 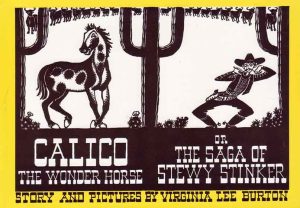 Calico, the Wonder Horse
1941 / 67 pages
A peaceful Western county is disrupted by a gang of bad guys. The wonder horse Calico disguises herself with a black mud bath so that Stewy Stinker, leader of the gang, will mistake her for his horse. When he does, she gives him a wild ride to jail. He escapes and makes plans to hold up the stagecoach only to discover that it is full of presents for the town’s children for Christmas Eve. Stinky starts crying because “I didn’t know I was that mean… holding up Santa on Christmas Eve. I’m never going to be bad anymore.” So the bad guys all decide to be good. This is a fun exciting story, but this people-are-only-bad-because-they-are-misunderstood turn at the end obscures that there is real evil in the world, people who are fully determined to be wicked, and they must be fought and not coddled.

Choo Choo
1937 / 48 pages
A hard-working train engine, Choo Choo takes a bratty turn and decides she wants to go out on her own, so she runs away. After a misadventure, causing all sorts of mishaps as she flies through crossings and even leaps over an open train drawbridge, Choo Choo eventually runs out of steam and is left all on her own at the end of an abandoned line. Fortunately, her conductor, engineer, and fireman go after her, find her, and bring her home, much to Choo Choo’s relief – she’s learned her lesson and pledges never to run away again.

The second book below made this category on, admittedly, a bit of nitpick, but the first earned its spot, being nothing but propoganda.

Life Story – At 80 pages, this is Burton’s biggest book by far, and all of it a godless evolutionary account of how life on earth originated. We move through millions of years of history until, in the concluding pages set in Burton’s time, there is on display, her wistful longing for a simple, country life.

The Emperor’s New Clothes – Burton illustrated this Hans Christian Anderson classic. As much as I like the story, what I’m looking for in an illustrated version for children is for the Emperor’s nakedness to be strategically and artfully obscured. Burton almost pulls it off, but on the last page we have a naked butt, and yes, it is a cartoonish naked butt. However, she’s already shown in previous pages that this nudity is unneeded. For this tittering age group, one naked butt is one too many.

If one could overdose on Virginia Lee Burton that might lead a child to romanticize the past, and maybe even take an anti-progress, almost Luddite turn. But Burton didn’t write all that much, so this isn’t much of a concern.

Instead we can just enjoy her timeless books for the lovely look back that they are. We can dig up our own old copy, and point out all the action going on, the favorite bits that we recall from so many years ago “when your grandpappy used to read this to me.” Burton at her best offers up stories that will endure at least long enough for you to read them to your grandchildren too.

The Galileo myth as a universal solvent