Two DVD series teach Science the way kids love to learn it . . . and from a six-day perspective

When it comes to science, some of the most compelling material for kids will have scattered evolutionary references throughout. More importantly, secular texts don’t give the Creator his due, and are lacking when it comes to awe. I suspect that’s because it’s hard to express awe and not direct it upward – awe expressed is worship. So when a scientists won’t acknowledge the sheer Genius at work behind the wonders around him (and instead credits it all to thoughtless evolution) that’s going to cut into his bubbling appreciation. So what a treat it was to find two DVD science series that are not only Christian, but compelling. And both are crafted from a biblical perspective that acknowledges God made it all in just six days:

Biology 101 is intended for teens and up but parents will love it too. Meanwhile Newtons’ Workshop is aimed at the younger set, Kindergarten up to maybe Grade 6, but the whole family can enjoy it together.

Wes Olson’s Biology 101 DVD series proceeds from a young-earth 6-day-creation perspective, but this high-school curriculum resource isn’t so much a specifically creationist resource as a solidly biblical one. What I mean by that is that Olson only rarely specifically mentions creationism and evolution, but he’s always talking about how great God is. That awe shows up in all he says.

But while the term “creationism” is seldomly heard, a literal understanding of the Bible is integrated throughout this series. For example, in talking about genetics Olson throws in the quick comment that there are only three people who have not come about by the combination of their parents’ DNA: Adam, made from the earth, Eve, made from Adam, and Jesus, made from Mary’s DNA and the Holy Spirit. The creationist perspective also comes out in how this look into earth’s various lifeforms is broken up. Olson has ordered the segments by what day in the creation week that the organism was made. So, we start with plants on the third day, then look at aquatic and avian creatures which were made on the fifth day, and so on. 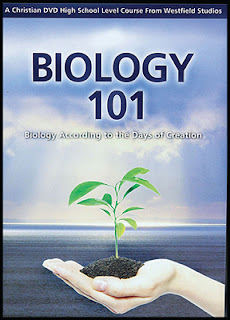 Production values are solid throughout. There are piles of pictures and film clips of the creatures being discusses, and Olson, as narrator, has a delightfully dry wit. This is evidenced in the many short extra bits of information he includes, such as this:

And sometimes it is the extra bits of trivia that serve to make his points more memorable. In talking about recessive and dominant genes he noted how dark hair was dominant over light, and,

This is meant as a high school biology course. However, it is only 4 and a half hours long, and while it comes with a 118 page textbook (on pdf, stored on one of the DVDs) it is less comprehensive than a high school biology course would need to be. So this would make a wonderful foundation for a course, but other materials would be needed to supplement it. The 9 episodes vary in length from as short as 15 minutes to as long as 44 minutes. 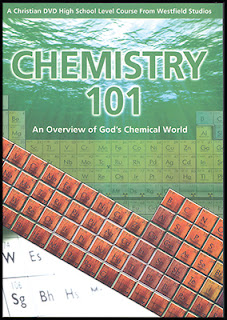 DISK 4
9. A brief history of the study of biology, the origins of genetics, and the moral questions involved in remaking our own genome

The course material is for ages 15 and up, but the content is appropriate for all ages. This focus on all-ages appropriateness does mean the discussion of our reproduction system is done in the broadest of strokes. We learn about how children are a combination of their mom’s and dad’s genes but no mention is made of exactly how those genes get mixed.

I’d highly recommend this to any Christian high school science teacher – whether they use it in whole or part, there’s sure to be lots of it they will want to show their classes. It would also be an excellent supplement for any Christian child attending a secular high school; this is the perspective they’d be missing.

Families with an interest in this subject matter will also find this worth buying. I should note that while I gave this an 9 rating, that was for how it rates as an an educational resource – I can’t think of any better. But from a solely entertainment focus, this would only score a 7. If you want to learn biology, this a wonderful method. If you want to be entertained, there are more entertaining films out there.

You can find out more at the Biology 101 site and check out the 14 minute first segment and introduction down below. The 4-DVD Biology 101 set is $70 US on the website, but seems to be cheaper at Christianbooks.com and Amazon.com.

Chemistry 101 is even better

Wes Olson has also produced a Physics 101 series and a Chemistry 101 series. I haven’t seen the Physics 101, but have had a chance to look at the Chemistry 101 series. I thought it was even better. Olson’s approach to teaching chemistry is to lay it out as it was discovered – we go through it historically, learning about one discovery after another. I was rather surprised about how much of our knowledge of chemistry has only been discovered in the last 150 years.

This historical approach is brilliant and fascinating. I watched this one simply because I couldn’t stop. But at 11 hours long it is a little over twice the material of the Biology 101 series….so I’m not done it yet.

That stars of this children’s “edutainment” show are most certainly Grandma and Grandpa Newton, who have more spare time and are quirkier than any grandparents you know. Over the course of this 8-episode series, this set of seniors is ready to help any time their grandkids have a question or a problem. 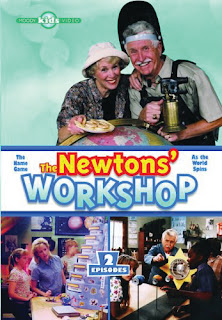 What kind of help?

Well, in Episode 1, when granddaughter Trisha and her friend Megan decide to do a science project on “world building” Grandpa Newton just happens to have a workshop full of mechanical models that show how wondrously God has designed this planet. And in Episode 4, when an astronaut’s visit to her school has Trisha curious about space, Grandpa helps puts the solar system in perspective by creating a scale model in which the Sun is the size of a beachball, and Earth is almost a soccer field away.

It’s fast-paced, funny, and has my 4 to 8-year-old daughters’ attention even after repeated viewings.

This is a conservative Christian perspective on science, put out by the (generally Calvinist) Moody Bible Institute. And, while I’m not up for quite as many viewings as my kids, these are entertaining enough that I don’t mind seeing the repeats now and again.

That said, I did have a caution to share. In Episode 8, “The Pollution Solution,” Grandma and Grandpa tackle the problem of pollution, and while most of this episode is sensible and helpful, there is a dash of confusion and a spoonful of tokenism mixed in.

It begins with Dad calling a family meeting about the way everyone is wasting water. But he misrepresents the problem: he make it seem like long showers can contribute to drought, but a shower’s water heads down pipes that will eventually return it right back to the lake or river it came from. Long showers can be wasteful, but they aren’t contributing to any drought – what’s going down the drain, never to be seen again, is mom and dad’s money, paying for water and heat that isn’t needed.

The tokenism comes in when Tim and Trisha end up having a trash contest to see who can generate the least amount of trash over a week. What isn’t addressed is that recycling costs money – it takes resources too – so recycling isn’t always the responsible choice.

We see a similar sort of tokenism when the Newtons briefly address global warming. This episode was made 20 years ago so, compared to anything today, the doom and gloom is a lot less pronounced. But we do get fed today’s typical non-solutions: Tim and Trisha suggest global warming can be addressed by “walking on short errands, or riding your bike, or carpooling to work.” Sounds good, and you’ll hear suggestions like that made today too. But it misrepresents the radical nature of the changes global warming proponents are really after. It isn’t a matter of more bikes, but fewer children.
Now, if the show’s producers had heard that sort of argument 20 years ago I think they might have seen through it. They’d know from the Bible that children are a blessing to be embraced, so when the world says the opposite – that they are a curse to be avoided – that gives Christians reason to be skeptical.

That said, Grandpa Newton has some good things to say in this episode too, and I think it can be watched to some benefit so long as mom and dad are there to talk their kids through it. But if you aren’t buying this as a package set, then DVD #4 might be worth giving a miss.

So who would like this best? While the producers recommend this for 7-12, I’d lower that on both sides by about 2 years. This is best suited for 5-10, although Mom or Dad can enjoy it too.

Overall this is just a fun, clean, biblically-based, science lesson wrapped up as family TV series. It entertained our family and educated them too – not a bad combination! You can pick it up at Christianbooks.com or Amazon.ca.

Both of these reviews first appeared on Reel Conservative.

Horton hears a Who!

Evolution as a gravedigger