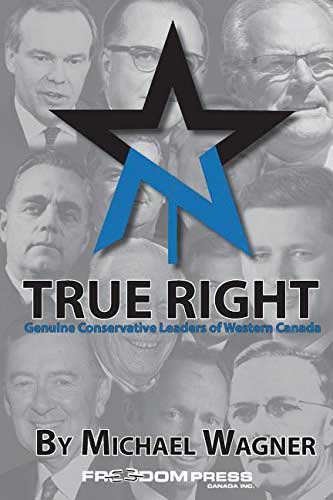 Feeling like you’re the last true conservative left in Justin Trudeau’s Canada? Then you need to read Michael Wagner’s True Right and find out that all through Canada’s history great, solid, courageous conservative men have stood up to the socialist hordes.

What is a genuine conservative? How’s this for a definition? Someone who knows who God really is, and knows the government ain’t Him.

That comes out in the book, which is divided into 17 short biographies of political leaders who shaped Western Canada, some of whom were conservative another who were not. There’s controversy to be had in the “weren’t” camp, where the author places some big and well-loved names…but his reasoning is hard to argue with. Among the 13 who were, their faith in God is often evident. In this latter group most readers will find a pleasant surprise or two, meeting stalwart gentlemen who they’d not previously known.

You might differ with Wagner on some of his assessments – I think in noting these men’s strengths, he’s sometimes overlooked a notable shortcoming or two – but you’ll most certainly come away encouraged. Yes, even in Canada there have always been true conservatives, good and godly men, who were willing to stand up and fight, win or lose.

“True Right” can be purchased here.

10 tales to help us clear away transgender confusion

by Donald J. Sobol 1963 / 88 pages Idaville is a small town with an impressive record - no one, absolutely no one, gets away with breaking the law. ...

If work is worship, does that mean I just gotta be warm and fuzzy all day?