A controversial bill to redefine triangles was presented in the British Parliament this past month. Debate was opened by the Culture Secretary, Valerie Brimble, who began by setting out the case for expanding what she sees as an oppressively restrictive definition.

“Times change,” she began, “old customs and habits which may have served society well in the past need to be constantly reviewed. It is my contention that the traditional view of triangles, as having three straight sides, joining at three corners and forming three internal angles which aggregate to 180 degrees must urgently be reviewed. There is no reason why this configuration need remain, and a modern society ought not to be hidebound by antiquated customs.”

Unusually for a Commons debate, she then whipped out a visual aid from under the dispatch box in order to demonstrate her proposals. Figure 1, she told a packed House, was an example of how triangles have been traditionally defined. 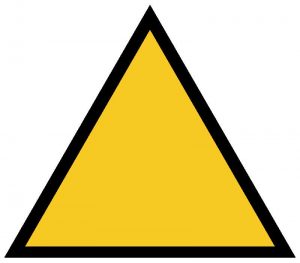 She then went on to explain that this traditional definition of triangles could no longer be tolerated in a modern, diverse and inclusive society. “If we are to be a compassionate people, then we must include shapes that we’ve previously pushed to the margins.”

She then sought to reassure some of her more traditionalist colleagues that what the government was proposing was merely a change to allow just one of the sides of the triangle to be redefined, to allow for the introduction of a wiggly line. Figure 2 was then presented to her fellow MPs, which depicted a “triangle” with this wiggly short side. 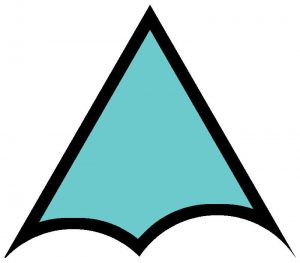 As she sat down after her opening remarks, Mrs. Brimble faced a barrage of criticism from opponents of the bill. It was pointed out to her that once you redefine triangles to include one wiggly line, it was only a matter of time until other self-interest groups demanded their right to add a second or even a third bendy line.

Mrs. Brimble responded by reassuring the House that the government had no plans to allow any further redefinitions. “We are only, I repeat, only, legislating to allow either one of the two shorter lines to be redefined,” she said. “We are not, I repeat, we are not legislating for the redefinition of the hypotenuse.”

However, this failed to satisfy her opponents who one by one got up to denounce the redefinition. One of the most vocal said this: “Can my Right Honourable friend tell the house this: once she has redefined the triangle to include a wiggly line, what reason can she give to those who then want to redefine it to include four straight lines, or multiple bendy lines, or even as many lines, bendy or otherwise, that they choose?” Not to be outdone by Mrs. Brimble, he then whipped out his own visual aid and showed the House what could well happen to the triangle if this legislation passes.

“Oh come off it,” scoffed a clearly exasperated Mrs. Brimble. “Don’t be ridiculous. They don’t look anything like triangles. Even a fool can see that.”

A 27-year-old man from Great Britain, who identifies as an 8-year-old boy, has become the first Transage winner of a gold medal at the World Cross Country Championship. Brian Potts, a fitness instructor from Hull, won the under-10s 6-kilometer race in a time of 17 minutes and 21 seconds, over four minutes ahead of his nearest rival. Potts, representing Great Britain for the first time, celebrated his victory on Twitter, writing: “First Transage world champion … ever.” Allowing adults who self-identify as children to compete in junior sports events has been a controversial subject, as critics have argued that it puts their opponents at an inherent disadvantage. However, Potts was quoted in the Hull Gazette earlier this year, arguing that banning Transagers from competing with children would be discriminatory: “As a society, we cannot have adults identifying as transage and it not be recognized in sports. Focusing on performance advantage is largely irrelevant because this is actually a rights issue. We shouldn’t be worried about transagers taking over the Olympics. What we should be concentrating on is things like fairness and human rights instead.” To those who have questioned his win, and whether it was fair to allow a 27-year-old to compete with boys nearly 20 years younger than him, Potts went onto Twitter to vent his frustration with what he sees as an attitude born of prejudice, and which belongs firmly in the past: “I can’t believe we’re still having this discussion in the 21st century. This is much bigger than sports. It’s about human rights. And catering to the Transage-o-phobes only furthers the oppression of those who only seek to be the age they feel. People, I won. Get over it.” Not everyone sees it that way, though. After the race, the silver medal winner, 9-year-old Daniel Song from Canada, and bronze medal winner, 8-year-old Manuel López from Spain, lodged a complaint with the International Association of Athletics Federations (IAAF), alleging that Potts had an unfair advantage and should not have been allowed to compete in the under-10s. However, this approach may well have backfired, with latest reports suggesting that they could find themselves stripped of their medals, and sent to a Transageist re-education camp before being allowed to compete again. Rob Slane is the author of "A Christian and an Unbeliever Discuss...Life, the Universe and Everything." His article is responding to the recent gold-medal winning performance by Rachel McKinnon, a man who says he is a woman, who, on Oct 14, won the women's 35-44 age bracket at the 2018 Masters Track Cycling World Championship. The transgender winner argued that because he’s lost to the women he was competing against more times than he’s beat them, and because many women have a higher FTP (Functional Threshold Power, or the maximum average power a rider can produce over the course of an hour) than him, that makes it fair. While that might make it competitive it would do so in much the same way that if a 40-something-year-old on foot raced his 8-year-old daughter on her bike, it might be close. God made us male and female, and that brings with any number of differences. Those differences might mean that an average man might be competitive with women in some events, but that doesn't make it any less a matter of apples competing against oranges. So what's the root issue here? The world says we can be whatever we think we are. But Christians know that only God's thinking can dictate reality. And actually, as the video below shows, on some level even the world recognizes that thinking something doesn't make it so. ...

Great minds think alike, and this month two of those great minds belonged to a missionary in Brazil and an evangelist in California. The evangelist...

WHAT’S INSIDE: Rev. Christopher Gordon's The New Reformation Catechism on Human Sexuality / Reviewing Matt Walsh's documentary What is a Woman? /...

The Hobbit: the film trilogy