The End was near

They’ve probably been predicting the end of time since the beginning of time.

Recently, we’ve had predictions it would end in 2012, due to some Mayan calendar related prophecy. And in 2011, Harold Camping, a prominent, and formerly Reformed, radio host made news predicting the universe’s destruction for October of that year. And, of course, cults all around the world were expecting the end in the year 2000, and countless individuals were predicting Western civilization would grind to a halt as the Y2K computer bug shuts down all the computerized systems we depend on.

While computers may be a recent invention, predictions of the end are not. For numerous orthodox and not-so orthodox Christians, predicting the end of time has been a pre-occupation for as long as anyone can remember.

The reasoning behind most of the predictions has often been creative, and of the sort of logic that could come up with almost any date. It often goes something like this: the world is going to end in 1998. Why 1998? Well, all you have to do is take the number of God – 3 – multiply it by the number of the beast – 666 – and you get 1998. (Since you’re reading this in 2017, you might’ve noticed a flaw in the reasoning.)

Other examples abound. John Gribben authored a book in the 1970s arguing that an alignment of the planets in 1982 would bring on the end as the combined gravity of the planets caused massive earthquakes, tidal waves, and other disasters. Though by 1980, even Gribben had disowned his theory, some religious groups continued preparing for an end that didn’t arrive. 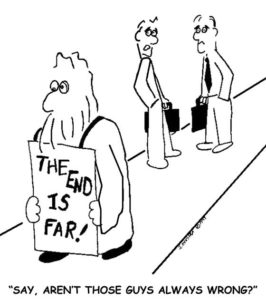 Charles Russell, founder of the Jehovah’s Witnesses cult, took a unique approach to forecasting the end. He predicted Christ’s return in 1874, but he predicted this after the year had passed. According to him, Christ had returned secretly that year. In the closest thing to success in a doomsday prediction, Russell expected the final battle between God and Satan would take place in 1914. While it wasn’t the final battle, World War I did start that year.

The End through the ages

For those trying to anticipate the end, the year 1666 was an obvious year to expect it. After all, the year itself contained the number of the beast. If anyone was expecting judgment that year, it only arrived in London, where The Great Fire burnt much of the English capital to the ground.

The Black Plague swept Europe from 1338 to 1349, returning for a second outbreak between 1357 and 1362. This rat-borne disease wiped out from 20 to 30 million people, anywhere from one quarter to one third of Europe’s total population. With this sort of catastrophe sweeping the continent, predictions abounded of the anti-Christ’s imminent arrival. He was expected to come in 1346, 1348, 1375, and 1400. If those dates didn’t produce the expected result, those peering into the future simply tried again and guessed another date. Though they thought they could see Armageddon coming, they miscalculated, repeatedly.

One of the predictions that seemed to catch a lot of people’s imaginations was that the end would come in 1260. The monk, Joachim of Fiore (1135-1202), developed an elaborate theory of history to back up his expectation. Based on Biblical genealogies, there are 42 generations from Abraham to Christ. If a generation is 30 years on average, that’s 1260 years. He reasoned that there would also be 42 generations after the birth of Christ, and thus, the world would end in 1260. What made Joachim’s system so much more enticing was that his whole history of time was based on the number 3. The first period, the period of the law or of God the Father, took place until the birth of Christ. The period of Christ would last until 1260, and the third and final period of the Spirit, when the world would be converted, would take place immediately after that. Though Joachim was consulted by popes, and wined and dined by kings and princes, he was still wrong. Time kept marching on.

The most widely believed date for the end of time was the millennium. No, not the year 2000, but the year 1000. At that point, there was considerable panic that the end was near. In 950, the monk Adso wrote to Gerberga, sister of the Frankish king, Otto I, saying that the anti-Christ would come when the last Frankish king died. This Frankish dynasty ended somewhere between 987 and 991, inspiring fear that the end of time was fast approaching. This fear was reinforced by Adso’s one-way pilgrimage to Jerusalem. The arrival of Halley’s Comet in 989 was seen as a sign of the coming apocalypse. These indicators were backed up by the preaching of Aelfric, the Abbot of Eynsham, who delivered apocalyptic sermons in the 990s, hinting at the end of time in the year 1000.

In the case of both the year 1000 and the year 1033, society changed in noticeable ways. Peace councils were formed to try to stop the violence and war of the period. In the resulting peace, parishes and villages were organized. Not surprisingly, new prosperity resulted. In preparing for the perceived end, the peasants and aristocrats drew together in a new spirit of cooperation and friendship. As the cynic might expect, when the end did not come, these advances quickly fell apart.

So what are we supposed to make of all this? Try as we might, we just don’t know the day or hour of the end, not even the angels in heaven know that. Since we’re still here, in time, having to use our talents to God’s glory, that means that we have to trust that God will take care of us.

Eventually, those predicting the end are bound to hit the mark. If you make enough predictions one of them eventually has to be right. However, when that last day comes, for us it’s not something to fear or to make us panic. When the Master returns and finds his servants doing what he has asked, He will richly reward them. The end of time is something to be eagerly expected, not eagerly predicted.

A version of this article first appeared in the May 1999 issue. For more information on End Times predictions see Richard Abanes’ “End-Time Visions: The Road to Armageddon?” and Bernard McGinn’s “Visions of the End: Apocalyptic Traditions in the Middle Ages”

by Peter Sís 2021 / 64 pages Nicholas Winston never set out to be a hero but he also knew what needed to be done. When the Germans were taking ov...