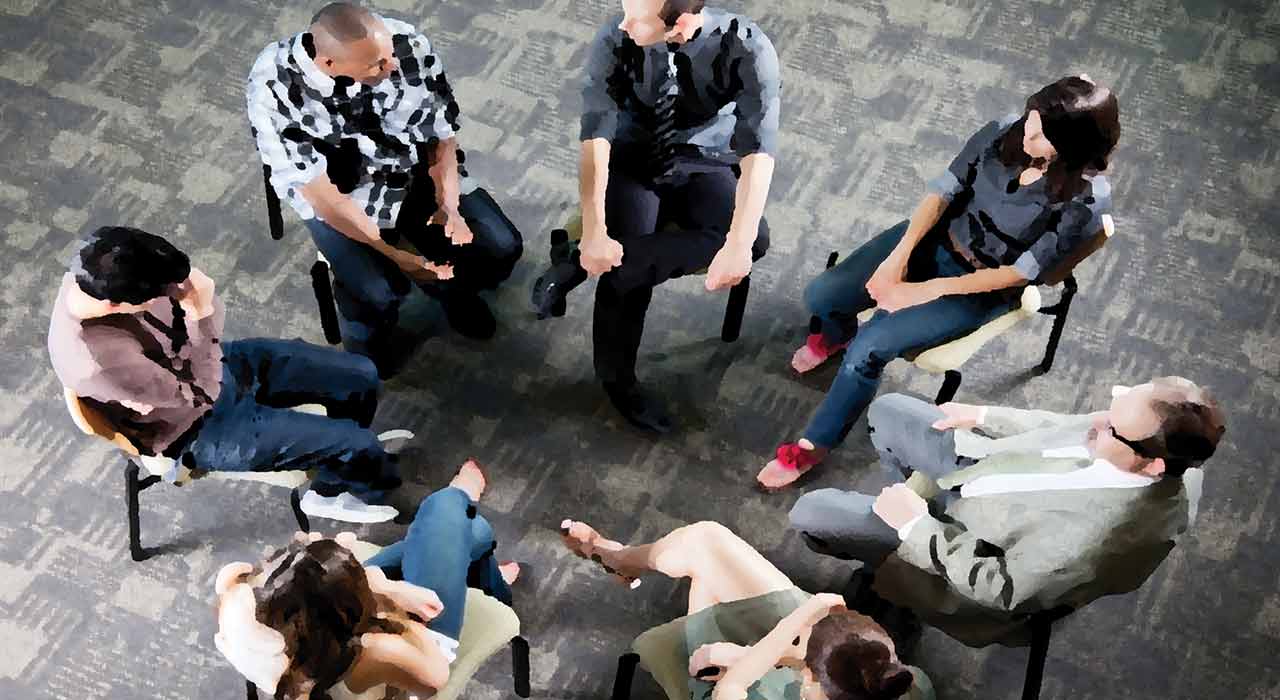 The following is a transcript of a Feb. 21, 2016 Truth in Love podcast produced by the Association of Certified Biblical Counselors (ACBC) and used here with permission.

Dr. Heath Lambert: Addiction is a common problem, in fact, for me it has been more than a common problem. My mother who died several years ago battled alcohol addiction for most of her life; she was enslaved to alcohol for over twenty years. As a little boy on up into my teens, I have been to dozens and dozens and dozens of meetings of Alcoholics Anonymous (AA). I am thankful for all the good things that AA brought into my Mom’s life to cause her ultimately to stop drinking, but it raises the question, what is a biblical response to addiction? What is a biblical understanding of AA?

To help us address this very important issue, I have invited to the podcast this week, Mark Shaw. Mark is the Executive Director of Vision of Hope and a pastor at Faith Church in Lafayette, Indiana. He is also an ACBC certified counselor and is the author of The Heart of Addiction. Mark, we are glad you are with us and as we think through this issue of addiction and AA, the word addiction is really not a word that we find in the Scriptures. How should Christians think biblically about that idea?

Mark Shaw: I think words are very important and they are like signposts; they point us in a direction. I think about 1 Corinthians 2:13 that says,

And we impart this in words not taught by human wisdom but taught by the Spirit, interpreting spiritual truths to those who are spiritual.

So with biblical language in regards to words like “addiction,” – I use that in my book title – and words like “relapse” and “alcoholism”; I use those words sometimes to help people know what the problem is. Then, when I write about it in my books like The Heart of Addiction I talk about a biblical, habitual sin nature problem and one of idolatry and of sin rather than as the world characterizes addiction.

Dr. Lambert: How does the world characterize addiction that is different than what the Bible understands as a habitual sin?

Shaw: These words are signposts and so they point people, I think, to a disease outside of themselves; to a problem that is not me, it is not really who I am, it is my disease. It is this thing outside of them rather than recognizing it as their own sinful problem that they need Christ to forgive them of and to begin the transformation process in their own hearts.

Dr. Lambert: Ok, so if that is what a biblical understanding of addiction is, then help us understand Alcoholics Anonymous; what is AA?

Shaw: AA is a program that started in the 1930s by a couple of guys: Dr. Bob and Bill Wilson. They started this program and really watered down some biblical teaching and biblical truth; no other way to say it than they just watered it down to make it more appealing to other people. So, you will hear some people who say that there are biblical truths in AA and in the organization’s Big Book, and that kind of thing, which undoubtedly are true; there are some biblical truths there but they don’t go far enough.

For example, one is that you admit that you are an alcoholic or you admit that you have a problem. Admission is good but confession is what the Bible says we should do. That is admission plus taking it the next step further of confessing it to a holy God that you have sinned against Him, that you need Christ’s forgiveness, and that you need this transformation to work in your heart by the Holy Spirit. There are words that they use that are good like “admission” and “making amends” and that kind of thing, but biblical truths are more excellent. Biblical truths point to the whole wisdom of God and so I think half-truths in AA can be dangerous for people.

Dr. Lambert: Ok, so let’s talk about that for a little bit because there are going to be a lot of people listening to this podcast who have had some kind of experience with AA. This is an organization that has affected and impacted untold millions of people.

I mentioned at the top of the podcast that my mother went to AA for years and years and years. I have been in more AA meetings than I know how to count. “Keep coming back, it works.” “It works if you work it.” “One day at a time.” I have been there; I know the stuff. I am thankful, as many who are listening to this are thankful for the good fruit that has come into the lives of people through their interaction with AA. Yet, as biblically minded Christians, we want to have concerns about AA. Why should biblically minded Christians be concerned about AA?

Shaw: AA sets itself up as a spiritual program. So right there I have a moment of pause; ok this is a spiritual program, but if you read the Big Book and what it teaches, the only higher powers that it mentions are like an enlightenment and something other than Jesus. By the very definition of the program it is a higher power of your own choosing, well, that is the very definition of idolatry. If I can choose a higher power, then I can make anything my higher power and that is idolatry. Those are super huge concerns from my perspective about being careful to send people to this so-called spiritual program that says any god will do; we know there is only one true God.

That is just unfair. My concern for biblical counselors is when you send people to these programs, don’t assume that this is a Christian program and that the teachings and the writings – the Twelve Traditions, the Twelve Promises, the Twelve Steps – are going to point them to Christ because, as I said in the beginning, the words that they choose really point people away from Christ to more of a medical solution and to more of just a worldly, secular mindset. Those are some of the dangers and concerns that I have with the program.

Dr. Lambert: Many Christians have come to see that there are imperfections and significant problems in AA and so there have been efforts to try to rehabilitate AA with some kind of Christianized version; we think of programs like Celebrate Recovery. Should Christians try to rehabilitate or rescue Alcoholics Anonymous by getting rid of the bad parts and trying to insert some Christian elements into it?

So, I like to start with truth, I like to start with the Scriptures, I like to proclaim the excellencies of Christ and point people to the riches of the Bible. I understand there are well-meaning people that are in these programs and they are doing their best and maybe it is all that is out there in their minds. I would rather just start with teaching Scripture, teaching the Word, teaching about idolatry, sin, ruling heart issues and address those matters with these people who struggle with addiction rather than using programs that kinda mix them; the world’s teaching with the truth of God’s Word. I don’t think oil and water mix, I don’t think it can be done; it confuses people and it may lead them down the wrong path.

Dr. Lambert: So I mentioned that my mom went to AA. In my memory as a little boy, I think she started going to AA about the time I was seven and finally was sober for what would turn out to be the rest of her life by the time I was twelve. So it took about five years for the things that were working in AA to be able to take hold. I am very thankful for that. When she went to the last rehab center they all said she was at death’s door; she nearly drank herself to death.

It was interesting because from the time I was twelve to the time I was twenty-five, my mom was a miserable person. She was what her friends in AA called “a dry drunk.” She was angry; she was sad; she was promiscuous. She was one of just the nastiest people I have ever met. She was able to keep a job, she was able to keep a roof over her head unlike when she was drinking, but she wasn’t a better person. In fact, me and my brothers use to seriously wish that she would go back to drinking because you could at least live with her. When she wasn’t drunk you couldn’t live with her when she was this way.

The reason I mention that is because what happened when I was twenty-five was I share the gospel with my mother for the umpteenth time…but she believed. She repented of her sins and believed, and heart change began to happen. She began to be a qualitatively different person. So for me it was this powerful demonstration – I am thankful for the good things that AA did, but really AA didn’t take my mom very far; it taught her to go to hell more efficiently. It cleaned up her life but she was still going to hell; she was not a changed person. It was the power of Jesus Christ in the Word of God that really brought her the rest of the way. What is it that the Bible adds that is so superior to the Twelve Steps?

Shaw: Well, the Bible talks about our sin, our need for Christ, and that the transformation process is progressive; that we become like Christ. You know, transformation, we have been transformed in justification, we are being transformed and in sanctification, we will be transformed in glorification and in the AA program, in the Twelve Steps, you won’t hear anything about Jesus Christ, you won’t hear anything about confession of sin. You admit you are wrong but you don’t confess sin, certainly not to a holy God, because you are picking a god of your own choosing and of your own understanding. If I choose God, then who is really God? It is me; I am in that position of authority.

So the Bible gives us lots of biblical truth that moves us and grows us in a deeper way and in an eternal way rather than the Twelve Step program. Which, I agree has some helpful teaching and some things in it that can really help people to be clean and sober, but our goal is not to be clean and sober, our goal is to be like Jesus for God’s glory and that part is missing in the program of Alcoholics Anonymous.

Mark Shaw is the author of “The Heart of Addiction” and “Addiction-Proof Parenting.” This article first appeared in the Sept. 2016 issue.