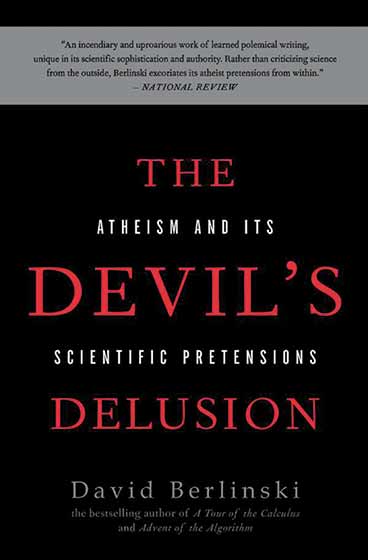 Some atheists, such as the late Christopher Hitchens, were very certain about their doubt. This sort of sure skeptic will argue that society should make a clean break from religion of every sort and instead embrace science and all its implications. But their assertions about science – that it proves God is not – don’t approach anything close to the truth. It was to counter such ridiculous claims that mathematician David Berlinski wrote The Devil’s Delusion: Atheism and its Scientific Pretensions.

Berlinski is as interesting as his book. He is not a creationist or even a Christian. This self-described “secular Jew” doesn’t oppose atheism and mindless evolution on any religious grounds. He just wants to pop the bubble of pretentious atheists, and as such the purpose of his book is not to determine whether God exists “but whether science has shown that He does not.”

It has not, as Berlinski humorously, shows.

Secular science has a very different origin story than the one we find in Genesis. According to the Big Bang theory view, billions of years ago something of incredible density suddenly started to expand, leading to the universe as we know it today. The Big Bang theory is relatively new – from the 1920s – and, from its start, it made atheists very uncomfortable. As Berlinski writes,

If the Big Bang expresses a new idea in physics, it suggests an old idea in thought: In the beginning God created the heaven and the earth.

Christians don’t have to agree with the Big Bang theory to be amused by the implications – even this secular theory suggests the universe had a starting point. And that prompts the unavoidable question: Who or what caused it to start? While atheists insist “Not God!” they have no scientific reasons to be so insistent. The Big Bang theory hardly requires an atheistic conclusion.

Many aspects of the universe are precisely ordered to sustain life on earth, and Berlinski shares several, beginning with the “cosmological constant.”

The cosmological constant is a number controlling the expansion of the universe….And here is the odd point: If the cosmological constant were larger than it is, the universe would have expanded too quickly, and if smaller, it would have collapsed too early, to permit the appearance of living systems. Very similar observations have been made with respect to the fine structure constant, the ratio of neutrons to protons, the ratio of the electromagnetic force to the gravitational force, even the speed of light.

Why stop? The second law of thermodynamics affirms that, in a general way things are running down. The entropy of the universe is everywhere increasing. But if things are running down, what are they running down from? This is the question that physicist and mathematician Roger Penrose asked. And considering the rundown, he could only conclude that the runup was an initial state of the universe whose entropy was very, very low and so very finely tuned.

“Scientists,” the physicist Paul Davies has observed, “Are slowly waking up to an inconvenient truth – the universe looks suspiciously like a fix. The issues are the very laws of nature themselves. For 40 years, physicists and cosmologists have been quietly collecting examples of all too convenient “coincidences’ and special features in the underlying laws of the universe that seem to be necessary in order for life, hence conscious beings, to exist. Change any one of them and the consequences would be lethal.”

Those arguments are very much of a piece with those that [atheist] Fred Hoyle advanced after studying the resonances of carbon during nucleosynthesis. “The universe,” he grumbled afterwards, “looks like a put-up job.”

Creationists often point to additional features, not specifically mentioned by Berlinski. Some examples include:

Atheistic scientists have proposed speculative theories to explain this unlikely string of coincidences. Berlinski demonstrates that these theories are not at all convincing, which poses a big problem for the atheists, because if their theories

In other words, the reason the universe appears designed to support life is because it has been designed. But by Who?

They have thus made every effort to find an alternative. Did you imagine that science was a disinterested pursuit of the truth?

Well, you were wrong.

Everyone is familiar with Charles Darwin’s theory of evolution. Over long periods of time, mutations occur in various organisms. Some mutations help the organisms to survive and even to thrive. As this process continues over millions of years, different species emerge. This is called “speciation.” One species evolves into another through a series of small and gradual developments.

Unfortunately, for its proponents, the fossil record does not show this gradual advance. Body types appears in the fossil record fully developed. Evidence of transitions from one species to another has not been found. Yet such evidence is precisely what Darwin’s theory requires.

Besides the absence of fossil evidence, Berlinski points out that

there are no laboratory demonstrations of speciation either, millions of fruit flies coming and going while never once suggesting that they were destined to appear as anything other than fruit flies. This is the conclusion suggested as well by more than six thousand years of artificial selection, the practice of barnyard and backyard alike.

In short, there is no genuine scientific evidence that any species has gradually developed into another species.

So if science doesn’t back unguided evolution, why do atheists insist it does? This is where we really get to the crux of the matter. Berlinski writes,

If Darwin’s theory of evolution has little to contribute to the content of the sciences, it has much to offer their ideology. It serves as the creation myth of our time, assigning properties to nature previously assigned to God. It thus demands an especially ardent form of advocacy.

Like everyone else in the world, atheists have certain presuppositions about the nature of the world, life, and reality. They have a worldview. When they try to explain the existence of life and the universe, they interpret everything through the lens of their worldview. Because they begin with the presupposition that God does not exist, their worldview rules out certain conclusions right from the very start.

Berlinski understands this and points out that behind the current wave of aggressive atheism “is a doctrinal system, a way of looking at the world, and so an ideology.” Atheists formulate arguments using science to make it appear that science supports their beliefs. But as Berlinski writes,

Interestingly, Berlinski discusses the implications of atheism for morality. Many atheists like to assert that their beliefs pose no problem for ethics. Atheists can still make moral judgments. The problem is that if they do make moral judgments, those judgments cannot be based on their atheistic beliefs. Atheism provides no basis for ethics aside from subjective personal preferences. Berlinski writes,

If moral imperatives are not commanded by God’s will, and if they are not in some sense absolute, then what ought to be is a matter simply of what men and women decide should be. There is no other source of judgment.

Morality is either determined by God or by man. If God does not exist, there are no external ethical restraints on man’s behavior.

So does science prove “God is not”? No, and atheists who claim otherwise are only showing their willingness to look past the evidence. They’ve started with atheistic assumptions and arrived at atheistic conclusions that are dictated by their worldview.

Berlinksi is not a Christian and he accepts many aspects of the secular worldview, including a long age for the universe, and, seemingly, aspects of evolution. But even in accepting these secular tenets he can’t look past the overwhelming evidence for design, and thus some sort of Designer, apparent in the world around us.

The gift of sleep: it's good for what ails you

Early to bed is a spiritual discipline. You may have said it yourself at some time, “I can get by with only 5-6 hours of sleep a night. It’s n...

Just ain’t the same “Watching church on a livestream is like watching a fireplace on TV: you can see everything with no warmth.” – Charlie Ki...