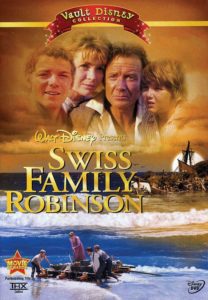 Based on the classic 1812 Johann Wyss book, Swiss Family Robinson tells the tale of a family of five that gets shipwrecked on a tropical island after being pursued by pirates.

Life on a tropical island can be fun, with ostrich and elephant races, but work is involved too. The family has to struggle together to build a treehouse that will keep them safe from the island’s tiger.

But what will keep them safe from the pirates, who are still looking for them?

The big concern in this film would be violence. While most of it is softened (a tiger, rather than maul its victims, sends them flying high into the air) there are intense scenes near the end of the film, as the pirates attack, that would scare young children.

There is also a snake attack that may have parents rolling their eyes (the actors seem to be grabbing the boa constrictor, rather than the constrictor grabbing them) but it had my daughters’ eyes bugging out. We played some of these scenes with the volume down low, so the dramatic music wouldn’t have the same effect. That seemed enough to make the scenes palatable for even our four-year-old.

This is a good old-fashioned classic with lots of gallantry on display – it’s a great film to teach boys to look out for girls. It’s also a good one to get your kids appreciating older films. Some of the acting is a little wooden, but as a family film that’s fine – this was never going to win an Oscar, but there is a reason it’s still being watched 50 years later. All in all a great film.

The trailer below, at 5 minutes long, will give you a good feel for what the film is like though it might give a bit too much away.

The Revolt: a novel in Wycliffe's England

by Douglas Bond 269 pages /  2016 I was never a fan of Church history in school, but I've come to realize that this was really the textbook's...