SPEAKING AGAINST SUICIDE: a summary review of “A Guide to Discussing Assisted Suicide”

Do you find it harder to make the case against euthanasia than against abortion? That might be, in part, because we have less experience – abortion has been legal in Canada since 1969, and euthanasia only since 2016.

Also, in abortion, we have victims who need advocates because they can’t speak for themselves, whereas in euthanasia the victims are also the perpetrators. How do you help someone who doesn’t want to be helped – who wants to die?

And consider how, in euthanasia, many of the cases involve terminal illnesses, and so have the same emotional tension as the hardest cases – those involving rape and incest – have in the abortion debate.

But, just as in the abortion debate, the key is to first find the central issue.

As in Blaise Alleyne and Jonathan Van Maren’s explain in their new book, A Guide to Discussing Assisted Suicide Similarly, the crux of opposition to euthanasia can also be boiled down to just one question:

How do we help those who are feeling desperate enough to want to kill themselves?

And again, there are only two options: either we prevent suicide, or we assist it. 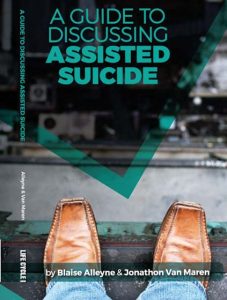 Alleyne and Van Maren have given us a wonderful tool in this book. Their extensive experience in the pro-life movement is evident as they start by framing the debate. If we’re going to be effective, pro-lifers need to understand the three possible positions that people hold on this issue. They are:

So how do we respond to the split position? Van Maren and Alleyne say that it is the job of pro-life apologetics is to show the split position’s inherent inconsistency. Suicide is tragic sometimes, but to be celebrated other times?

The authors then give ways to counter the reasons often used to justify some suicides, given by the acronym QUIT for:

They spend 20 pages showing why these are fallacious reasons, so I can’t properly sum up their argument in just a line or two, but one underlying flaw to these justifications for suicide is that they are based on ageism and ableism.

So in much the same way we can expose the inadequacy of many justification for abortion by bringing out an imaginary “two-year-old Timmy” (“What if the mother was too poor to have a baby?” “Would that be a good reason to kill Timmy?”) in the assisted suicide debate we can bring out an imaginary able-bodied 19-year-old. If someone opposes this 19-year-old committing suicide, why is it that they are fine with that 90-year-old doing so? Or that wheelchair bound lass? We can expose them for being ageist and ableist – treating people as less worthy of life based on their age or ability – and show them it is wrong to assist the suicide of anyone, of any age or level of health because as the authors put it, “suicide is a symptom [of despair], not a solution.”

Next, the authors take on those are (sadly) willing to be consistent and advocate total choice for all who desire to be assisted in ending their lives.

Our only response is to insist that the suicidal need love even more than they need argument.

The fourth chapter shows how dangerous it is to accept either the split or the total choice position, because

Finally, the authors show the pro-life position. We know, on the one hand, that life is a gift from God, so it is not to be thrown away, but on the other, that all life ends, and because of Jesus we need not fear death. So the pro-life position is not about continuing life at all costs. It allows for:

In their Guide to Discussing Assisted Suicide Alleyne and Van Maren have done an admirable job of giving us the tools to carry out that responsibility. Given the urgency of the push toward euthanasia in both Canada and U.S., we need to read this book.

“A Guide for Discussing Assisted Suicide” can be ordered at lifecyclebooks.com (where you can also find the option to buy in bulk for your pro-life group or circle of friends at greatly reduced prices).

The don't and do's of answering fools

In Proverbs 26:4-5 God says we shouldn’t argue with fools…except when we should. Do not answer a fool according to his folly, or you yourself wi...

"When you coming home, dad?"

Cat’s in the Cradle was once described by the artist’s brother as the song that “…put more fathers ill at ease than any other song in history....