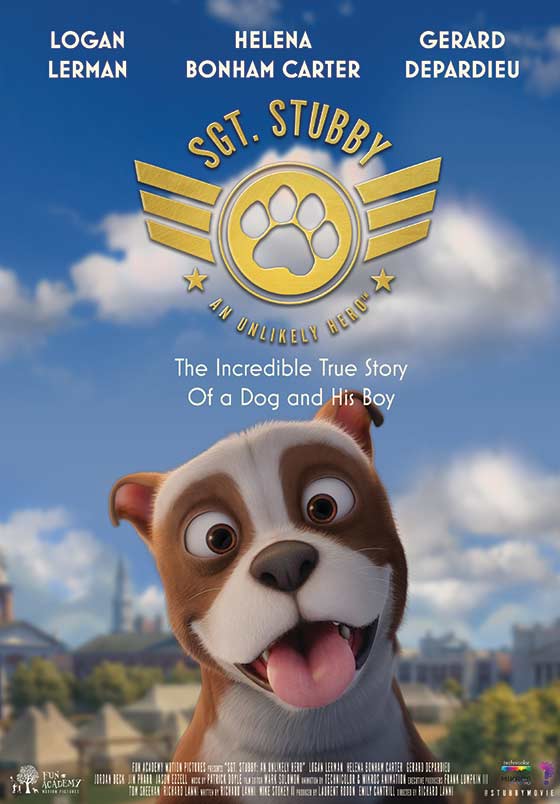 I read a review by a parent who arrived at the movie theater with his four-year-old and picked this film based solely on the smiling ever-so-cute doggie he saw on the movie poster. One problem: while this is about a charming, incredibly clever dog named Stubby, it’s also about life in the trenches of World War I. And that’s not 4-year-old material. Why, oh why, don’t more people read movie reviews!

But, as we mark the 100th anniversary of the end of the “Great War” this is a movie that many a ten-year-old and up will enjoy and should watch.

It’s based on the true story of Sgt. Stubby, the most decorated dog in American history. The story begins with the homeless dog attaching himself to a unit readying itself to be shipped overseas. First, he charms his way into the heart of one Private Robert Conroy, the main two-legged character in the film. Then, one by one, from the lowest private to the general in charge, he wins over everyone. Well, not everyone. Some folks just aren’t dog people, and Private Elmer Olsen just doesn’t understand what’s so special about Stubby.

When the unit heads overseas, Stubby manages to sneak aboard the ship, and he too is heading to the fight.

From this point onward there’s one perilous scene after another, but to make it appropriate for (nearly) the whole family, the filmmakers decided to make this an entirely bloodless film. Even as bullets are whizzing, no one gets shot. German bombardments send both soldiers and dirt flying, but the soldiers get dug out and emerge both unbruised and unbloodied.

While parents will appreciate the nonexistent blood and gore, by muting the violence and death the film ran the risk of also muting the sacrifice that these soldiers made. But as the film draws to a close there is one death – to a secondary character, Private Olsen – that drives home, even to the younger audiences, what these men risked and what they lost. Without giving it all away, I’ll note that the death happens off screen and we don’t even see the body. It is the soldier’s absence that is noted – while his friends are looking for him after the last big battle, Stubby brings them his helmet. That’ll get some kids crying, and even moisten the eye of many an adult. But it is necessary. And it is done with great care and restraint.

As you’d expect with an energetic pooch as its star, there is a lot of fun in the film. Kids are sure to enjoy Stubby training along with his fellow soldiers, getting chased by the cook, and winning over the Colonel after Conroy teaches his little buddy how to salute. In another treat, Gérard Depardieu makes an appearance as a large, wise French soldier, who along with Conroy and Stubby is tasked to spy out German positions. These “three musketeers” become fast friends, saving each others’ lives.

There are only a couple of concerns, including a little bit of language. The worst of it includes one character saying “What the devil?” and another exclaiming “I’ll be darned.”

There is also just one bit of “naughty” comedy as the drill sergeant lectures his men on they should imitate the never-complaining, always-ready-to-roll Stubby but he makes this speech just as Stubby decides to lick his nether regions. That gets a laugh out of the sergeant and his men as they are presented with proof-positive that Stubby has some traits that aren’t worthy of imitation.

The big caution would concern the near constant peril. This is not a film for four-year-olds. But most ten-year-olds will be sure to enjoy it.

This was such a pleasure to discover. Before this, I couldn’t have imagined a war film that would be appropriate for the very young and yet still be a treat for their parents. This would be a great one to watch with the family for Remembrance Day, Memorial Day, or Anzac Day. You can find out more about the film at its website: StubbyMovie.com.

The necessity of creeds and confessions

Many years ago, ten Christian men got together and decided to start a church. For several weeks they met together every evening to discuss what they b...