By: Nathan Zekveld and Jon Dykstra

The Scottish government and Scottish police have joined together under the banner “One Scotland” to campaign against hate crimes using videos and a variety of billboards. One billboard reads:

Another, longer one, says:

Dear bigots,
division seems to be what you believe in. We don’t want your religious hate on our buses, on our streets and in our communities. We don’t want you spreading your intolerance. Or making people’s lives a misery because of their religious dress. You may not have faith in respect and love, but we do. That’s why if we see or hear your hate, we’re reporting you.
End of sermon.
Yours, Scotland

The minister at St Peters Free Church (and former moderator of the Free Church of Scotland) David Robertson, was quick to point out the problem with this campaign – the police have lumped hate crimes (crimes motivated by hate…as opposed to those motivated by love?) in with “hate incidents.” Vague definitions mean that the police’s hate crime campaign might well be violating their own definition of a hate incident. On his blog (theweeflea.com) Robertson shared a letter he had written to the police and government to report to them their own “hate incident” and began with their definition:

“A hate incident is any incident that is not a criminal offence, but something which is perceived by the victim or any other person to be motivated by hate or prejudice.”

On these incredibly vague grounds, he points out that on a day-to-day basis, he experiences a lot of anti-Christian “hate.” He gives as examples, parishioners who have been bullied at work and in higher education. But he also quotes a number of emails that he regularly receives, such as:

“Personally, as a secularist, I hate religion and feel I have every right to, despite attempts by the Scottish government to sneak a blasphemy law round the back door by making it an offence this year to hate religion.”

He then points out that the inundation of billboards is in and of itself “hate incidents,” promoting anger and hatred against religion, possibly resulting in vandalism against churches and worse. He also points out that the problem with the term “hate crime” is that it bears with it the threat of criminal prosecution. 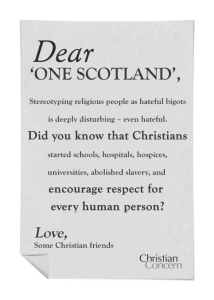 We can learn from Robertson’s response to the officials in Scotland. With some wit, he points out the self-contradicting nature of their own propaganda, and then takes the time to ensure there is no doubt that he is against bullying and hatred…and also governments that exceed their proper limits.

Hatred, as we know from Scripture, is a sin, but things such as murder and assault are sins as well as crimes. Sin must be repented of, and then forgiven in Christ. Crimes must be punished by the government, and it is difficult to judge something based on feelings in a court of law.

At the end of the day, the irrationality of such a billboard campaign may be clear enough for even the culture at large to see. It is internally incoherent, as can be seen in their two fundamental principles:

One other Christian voice has chimed in with wit and humor to expose this campaign. A Christian think tank and advocacy group, Christian Concern, created three alternative posters copying the very same style. One read:

Dear One Scotland,
All people should be free to express their views, even if they offend other people. This is what freedom of speech means. How about promising to protect those whose views others might find offensive? This is how democracy works.
Love,
Some Christian friends

And we’ll leave them with the last word:

Dear One Scotland,
Do you really think that churches are teaching their members to be hateful towards others? Or to be violent towards people we disagree with? Why not pop into a church sometime and find out what we really think?
Love,
Some Christian friends