US creates 1984-ish Disinformation Governance Board

Meanwhile, in Canada, the government’s Bill C-11 would give the government enormous power over the Internet. So, like our American counterparts express below, we need to call on our government to “shut this down.”

Jonathon Van Maren reviews RP contributor Chris Martin‘s new book, and shares how: “In order for people to use social media responsibly—i.e., not get addicted—we essentially have to use these platforms in ways that they were not designed to be used.”

Canadians love government spending…but not paying for it

The Fraser Institute has found support drops off dramatically for three new government spending programs when a cost is mentioned. It seems much of the initial support was based on an assumption that the programs would cost nothing. But isn’t this like going out for a meal and then being all surprised when the bill comes? Don’t we all know, there is no free lunch?

No. As Henry Hazlitt noted, “The world is full of so-called economists who in turn are full of schemes for getting something for nothing.” Governments tout the benefits of their program but seldom spell out all the costs, so it may well be that taxpayers have been tricked into thinking that lunch will be free. Or the answer might be found on a different front: some support might have come from people who thought they would get the benefit, and someone else the cost. 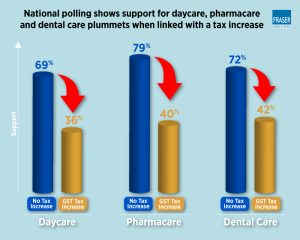 It comes down to trade-offs… that politicians aren’t even willing to acknowledge.

Canada’s federal, in-person voting on Election Day has each vote counted by a poll clerk, as well as representatives from all the major parties. That means there isn’t just one count, but at least four (Election Canada’s, plus counts from the Liberals, Conservatives, and NDP). This process precludes not only the possibility of fraud but even the appearance of it. Our in-person voting procedure is secure and it is spectacular. In contrast, mail-in ballots leave possibilities like this…

We need to talk about Assisted Reproduction

“The pain of infertility is real and deep, and the desire for children is natural, inherent, and good. It’s a tragedy whenever someone who embraces this desire is unable to experience it. At the same time, we question the use of certain artificial reproductive technologies. Ours is a culture in which adult happiness is prioritized over the rights of children, both in the taking and the making of preborn life…”

If you’ve thought about visiting the life-size model of the ark they’ve built down in Kentucky, you won’t find a better preview than this 1-hour tour with Answers in Genesis founder Ken Ham and Babylon Bee’s editor-in-chief Kyle Mann. Mann brings some of the funny, but in a surprising twist, Ham proves to be quite the sardonic wit!

The relationship between Mohammed and Satan (7 min) When someone claims to have a revelation from God there are three possibilities for us to consider: It is a product of only their own mind: they are making it up or are crazy. They are getting revelation, but it isn't from God. It's from the devil. They are getting revelation from God. David Wood examines these possibilities when it comes to Mohammed... Gen Z enters the ministry: 3 big challenges As Gen Z hits 25, the culture they've grown up with presents them with 3 challenges their parents might not have had to face, or not to the same extent: growing up with porn at the ready on their phone Gender confusion - even in the Church we're getting confused about what makes males and females different Opinions trumping facts - it'd more and more about "lived experiences" A chance to speak up for the unborn This week it was reported that the US Supreme Court may overturn Roe vs. Wade – this is the 1972 court case that legalized abortion in the United States. The reports are based on a leaked early draft of an upcoming Supreme Court decision, and this news has pro-abortion protesters camping out on the Supreme Court steps shouting "My body, my choice." Of course, this same chant was recently used by some who didn’t want the COVID vaccines. But their appeal to bodily autonomy was labeled “selfish.” It was deemed good and right to pressure the unwilling to get jabbed because it was being done for the sake of others. Whatever we might think of that argument, what we have here is a God-given opportunity to make a point. And what a swing and a miss it would be if we made that point about vaccines rather than the unborn! “My body, my choice” doesn’t apply when lives are at stake? Well, let's take that to its logical end: banning abortion would save almost one million American lives every year! So let's ask the Left, "If you think ‘my body, my choice’ is a selfish reason to refuse the vaccine, why would it be any sort of justification for killing a baby?" https://www.instagram.com/p/CdHHJ7HuJsV/?utm_source=ig_web_copy_link Great pro-life shirts for sale To help you speak up for the unborn, Canadians and Americans can order some great pro-life shirts from Choice42 (the same group that brought us the wacky and wonderful "Magic Birth Canal" video). You can see pictures of the three shirts on offer at the top of this page, and order them by clicking here on the title above. Is brainwashing going to make a dishonorable comeback? "Compulsory moral bioenhancement" is quite the mouthful, but it's just a modern update for what, in the Cold War era, we called "brainwashing." Now some bioethicists are proposing it as a supposedly legitimate alternative to execution or imprisonment for prisoners of war fighting "unjustly." But who defines what's just and unjust when the world has rejected the only fixed standard of God's law? What ethics are these bioethicists standing on? A case against the minimum wage Some who support a mandatory minimum wage do so out of a sense of compassion for the poor. But does such legislation help the poor, or limit their options? In the clip below (from some years back) US Speaker of the House Nancy Pelosi makes a case that some of the people working in her office don't need to make any wage at all because the experience of working for a United States congresswoman is so educational. That's a good point. Trade school and university are expensive ways to learn new skills, so how much better off young people would be if they could learn what they needed via low-paying or unpaid internships instead. However, in this same clip, Speaker Pelosi also argues for a mandatory minimum wage. She hasn't applied such a rule to her own office, and yet she's sure that it is the right thing for everyone else's workplace. That's hypocritical, to be sure (Matthew 7:2), but more importantly, it is arrogant. She has compelling reasons to carve out an exemption to the mandatory minimum wage for her own situation but is certain that in businesses across the country none of the millions of employees and employers could have different, but equally compelling, reasons to work for free or for some other sum that's below the minimum wage. ...

Why animals don’t get lost (and no, it’s not because they’re willing to ask for directions)

Broken Beauty – Reflections of a Soul Refined by Cancer