As we continue to celebrate Advent, we need to deal with a competing story. But it would probably be more accurate to say that we have to deal with a godly story that has been encrusted with many layers of foolishness. But let us take away those layers, and ask – who was the original Santa Claus?

St. Nicholas of Myra (a city in modern-day Turkey) was a fourth-century bishop. He was renowned for his kindliness to the needy and to children. He inherited a large fortune which he gave away, establishing orphanages, hospitals, and hostels for the mentally infirm. Legends spread concerning his generosity, which included him delivering gifts secretly by night. During his day, the famous Council of Nicea was held and, according to one legend, the orthodox Nicholas slapped Arius in the face for his blasphemy. Following the legend, Nicholas was then defrocked for this breach of decorum, but was later reinstated as the result of a vision. It should be obvious to us Protestants that some of the medieval follies concerning veneration of saints were already at work here.

The man became a bishop, the bishop became a saint (in the medieval sense), and stories spread concerning his ability to continue on with his generosity, even though he had long been with the Lord. The stories all had many variations, but generosity was at the heart of all of them. These different European stories came to America from many directions, and they all went into our famous melting pot.

The Scandinavians brought their conception of him as an elf. The Dutch brought their name for him (Sinterklaas). In 1808 Washington Irving wrote a story of him as a jolly Dutchman. In 1822, a poet named Moore gave us the Night before Christmas getting rid of Irving’s horses and wagon, and subbing in reindeer and sleigh. Then in 1863 the famous cartoonist Thomas Nast gave us the popular conception we see all around us today. 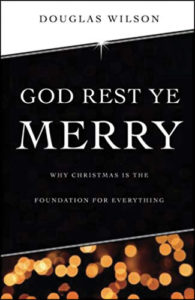 The issue for us is not stockings by the chimney, or other harmless customs. But we must learn from this that if we do not tell our stories faithfully, they will gradually change over time until they become quite unrecognizable. With a story like this – one that has in the minds of many supplanted the story of the Christ child – we have to remember that St. Nicholas probably would have slugged somebody over it.

Pastor Douglas Wilson’s “God Rest Ye Merry: Why Christmas is the Foundation for Everything” is a wonderfully curious book that not only explains how Santa once punched a guy in the face, but ”why nativity sets should have Herod’s soldiers.” If the yearly repetition has you less than enthused about Christmas time coming yet again, this book is for you, to help rekindle your understanding of, and enthusiasm for Advent and Christmas. This excerpt has been reprinted here with permission of the publisher Canon Press.

Why and how the Nicene Creed came to be

The word “orthodoxy” comes from the Greek orthos which means right, true, or straight, and doxa which is praise, or opinion. Therefore, orthodoxy ...

Solomon did not have a web page. He didn’t blog. He didn’t tweet. He wasn’t on Snap Chat or Instagram. But he can still help you navigate the se...

In the hall of the Dragon King

by Stephen Lawhead 1982 / 370 pages This is an old-fashioned fantasy tale, with a loosely Christian underpinning. Quentin is a young man who has h...

Stepping into the story: Hamlet with a happy ending?