During the 2015 federal election, the Liberals campaigned on bringing in electoral reform. While they didn’t deliver on that promise, they weren’t the first to propose fundamentally changing the way Canadians vote, and they likely won’t be the last. So what prompted their promise? Why did they think voters wanted a new electoral system? What exactly needs fixing with our current system? And what are the advantages and disadvantages of the alternatives?

THE CASE AGAINST FPTP

The common complaint with our current First-Past-The-Post (FPTP) system is that it doesn’t seem to reflect voters’ wishes. Under it a candidate doesn’t need a majority of the vote to get elected; he only needs one vote more than the second-place finisher. So, for example, in the 2015 Federal election that meant one candidate – the NDP’s Brigette Sansoucy – was able to win a seat in the House of Commons even though she received only 28.7 percent of the vote. In her riding almost three-quarters of voters picked someone else, and yet she is still their elected representative.

In 2015 the FPTP system also allowed the Liberals to win a decided majority of the seats (54.4 percent) even though they had a decided minority of the votes (only 39.5 percent).

THE RANKED BALLOT: FOR 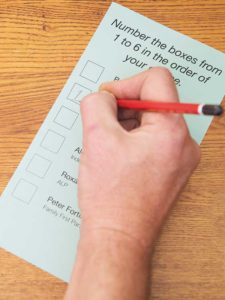 So what sort of electoral reforms have been proposed? The Liberals’ plans never got all that specific, but back in 2014, in an appearance at Ontario’s Western University, Justin Trudeau told students, “I like the idea of a ranked ballot.”

There’s a clear reason why the Liberals would. Under a ranked ballot (or preferential) system voters would rank the candidates from first to last (see the picture). If no one got 50 per cent of the vote, then the candidate with the least 1st place votes would be dropped off, and his ballots would be redistributed according to who those voters had marked as their second choice.

The advantage of this system is that the eventual winner can claim the legitimacy of having more than 50% of voters picking him. He may not have been their first pick, but he was at least someone they voted for.

THE RANKED BALLOT: AGAINST

The problem with the ranked ballot is that it gives an advantage to whatever parties are present in the “middle” of the political spectrum. Why? Because when voters on the right or left rank their second choices they aren’t going to pick the parties on the other side of the spectrum. Instead they are going to default to the candidate who is the closest to them.

CBC’s Eric Grenier estimated that under a ranked ballot the Liberals would have picked up an additional 40 seats last election (mostly at the expense of the Conservatives).

No wonder then that the Prime Minister prefers ranked ballots.

Another alternative often proposed is proportional representation (PR). While there are many forms of PR, the basic premise is that all involve parties getting seats in proportion to their total vote total. Under this arrangement, if we use the 2015 election as our example again, since the Liberals took 39.5% of the popular vote they would have ended up with just 39.5% of the seats in Parliament.

That means that, as Eric Grenier noted, under the most basic form of PR, in the 2015 election the Liberals would have lost 50 seats, while the Conservatives would have gained 10, the Green Party 11, and the NDP 23 more.

Interestingly, it is under the PR system that the Christian Heritage Party (CHP) is most likely to prosper. While the CHP’s 15,284 votes in the 2015 election wouldn’t have been enough to garner them an MP, under a PR system, Christians who had previously wanted to vote for them but thought it a wasted ballot could now cast that vote knowing it would help elect at least an MP or two.

But PR also opens up possibilities for other smaller parties too. The CHP would finally be in the House of Commons but there would also be a representative or from the Marijuana Party. We’d likely see a Communist too, and maybe even a Rhinoceros Party MP (yes, there really is a federal Rhinoceros Party of Canada).

In addition, it would become harder for any one party to win an outright majority. As the Fraser Institute reports in their booklet Electoral Rules and Fiscal Outcomes, from 2000-1015

In countries with PR election systems…83 percent of elections resulted in coalition governments.

That might not sound like much of a problem – so what if some parties have to work together? Why wouldn’t that be a good thing? The reason its a problem is because when a coalition government is built, each participant does so on the condition that they get something out of it. And that “something” usually requires the outlay of money. In the same booklet, the Fraser Institute noted that PR governments spend an average of 29% of their country’s GDP, whereas other governments elected via means such as ranked ballots or the FPTP spend only 23% of the GDP.

So a downside to any PR type of system is that taxes will likely go up. Coalition governments are costly!

Another downside? It increases party leaders’ power. Proportional Representation most often involves voting for a party, not a candidate. A party puts out a list of their candidates, in an order of their choosing, and if they get enough votes for, say, three MPs, then the three people at the top of their list will get in. Canadian party leaders already have dictatorial powers over their MPs, and the PR system would only increase that power – refuse to pick up your party leader’s drycleaning and he’ll bump you down your party’s list, or take you off it entirely. The last thing we need is to strengthen party leaders’ stranglehold over their party’s MPs.

Some countries have adopted a mixture of these different systems, which means there are a limitless number of possibilities. But these three are the core sorts.

So what system should we, as Christians, push for? Each has its own strengths and weaknesses and there isn’t an electoral system free of flaws. Ranked ballots give the centrist Liberals an advantage over the other parties that they don’t deserve, while proportional representation seems likely to expand the size of government and strengthen party leaders’ power. None of these are attractive alternatives. Meanwhile, even as FPTP frequently gives minorities a majority of seats, that bias isn’t specific to one particular party.

So I will say of our present system what Winston Churchill once said about democracy: First-Past-The-Post is the worst form of electoral system…except for all others.

A version of this article first appeared in the September 2016 issue under the title “Canada’s electoral reform.”

Explaining why it's evil to our non-Christians friends ***** In recent weeks, I’ve come across what seems like a multitude of articles on the sub...