Is this a good objection? I don’t think so, for two reasons.

First, is it true that pro-lifers aren’t helping people after they’re born? Well, maybe some aren’t. But many are.

Witness the proliferation of crisis pregnancy centers/ pregnancy care centers. According to the Charlotte Lozier Institute, in the U.S. in 2017 there were 2752 such centers, providing much help to women and their children.

Also, witness the fantastic response gotten from a newspaper editor who asked via Twitter (disparagingly and dismissively, expecting no good answers) what pro-life people have done personally to help lower-income single moms. It turns out this editor received 13,000 responses indicating that pro-life people in fact do a lot!

Permit me to speak from personal experience. My wife Carla is deeply pro-life. But she is also humble and doesn’t talk much about the good things she does. She sees such talk as morally inappropriate – as bragging. So I will brag on her behalf!

When Carla and I were dating and during our first years of marriage, Carla worked in a group home caring for – helping – children who were severely handicapped physically and mentally.

Later (while I was completing my PhD and beginning to teach philosophy courses) we lived for eleven years in a low-income, high crime neighborhood. During this time Carla (along with a couple of her friends) began a community center to help our needy neighbors. This community center was supported by one church initially, then two, then three, then seven—and more.

Carla also tutored some of our neighbors’ kids. She also taught single parents how to make inexpensive but nutritious meals (Carla even took the time to become certified by our local health department to do this). She also helped organize a weekly food distribution. She also helped a neighbor (a low-income single mom with five kids) learn to drive, obtain a driver’s license, and find some part-time employment (subsequently Carla often loaned our car to this mom for grocery shopping). Carla also helped a young woman deal with her abusive husband. Carla also used her nurse training to help injured neighbors as well as neighbors with young children, including a home birth. Carla also was instrumental in having our family provide ongoing financial support for an orphanage in Bolivia begun by a young couple at our church. And there’s much more, but space doesn’t permit.

(She also homeschooled our two sons during this time!)

You get the picture: Pro-life people (like my wife) are against abortion and they often do lots of good stuff – which we tend not to hear about.

Second, an important logical point should be made: Even if pro-lifers weren’t (contrary to fact) helping people after they’re born, this would not make the killing of unborn children morally correct or permissible. And it wouldn’t mean pro-lifers shouldn’t speak out against abortion. Pro-lifers hold the view that abortion is the killing of an innocent unborn child – and is wrong, period.

Maybe the following parable from Scott Klusendorf will help:

Joe found the young girl unconscious in her upstairs closet. By the time he got there, the structure was a raging inferno. No one else dared go inside. Scooping up the girl, he took his only exit, straight out the second-story window and into the bushes below. The girl lived. Joe sustained three cuts and two sprained ankles – and an avalanche of questions.

The media wanted to know how he planned to pay for the girl’s food, clothing, and health care now that he’d rescued her. A pastor asked if time spent saving the girl from temporal flames might be better spent saving people from eternal ones. The social justice coordinator at a local parish insisted that if Joe truly cared about saving lives, he’d care about all life and spend equal time rescuing poor workers from rich corporations. The local Congressman asked if Joe supported tax hikes aimed at reducing fire risk. Joe just kept looking at the girl.

The above story is contrived, but it’s played out in the real world every day. Only the issue is abortion. The minute you state your pro-life convictions, foes attack.

Or think of it this way: I believe that killing kittens by suctioning off their legs (via a high-powered suction machine) is wrong, period. Objecting to my view because I don’t volunteer at my local animal shelter is beside the point. (Oh, by the way, our cat Rupert came from our local animal shelter.)

The critics’ objection is beside the point, too. 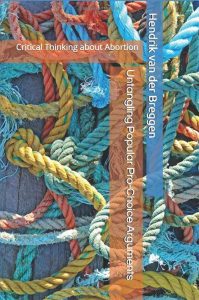 In conclusion, the objection that pro-lifers aren’t helping people after they’re born is often false and it’s not relevant to whether or not a pro-lifer should speak out against the killing of innocent human beings via abortion.

Hopefully, pro-choicers are helping people after they’re born, too, to provide a real choice, and thus not merely advocating for the right to kill unborn children.

P.S. Permit me to brag about my wife once more. Carla donates blood regularly. At time of writing, she once again donated blood – for the 73rd time! Seventy-three blood donations. SEVENTY-THREE. Pro-lifers aren’t helping people after they’re born. Yeah, right.

Documentary 9 min / 2003 This film changed me. It is a video, taken in the womb, of an abortion. It is evil uncovered and brought into the ligh...