Pluto: Déjà vu all over again

Until the summer of 2015, we knew very little about Pluto. We knew that it was far away, 5 billion kilometers. We also knew it was very cold, at -223 degrees C or less, which is just 50 degrees C above absolute zero. And we knew that at 2,370 km across it was small by the standard of other bodies in the solar system. Earth’s diameter, for example, is 12,756 km, while Jupiter’s is 142,984 km and even our moon’s diameter (over 3,000 km) is larger than that of Pluto. Planetary scientists had few expectations that this small, cold, far away body would show many unique features.

Based on a mistake

The fact that NASA was sending an expensive probe to study this remote body was remarkable in itself. Especially when we consider it was only as a result of a mistake that the planet was even discovered!

Astronomers in the nineteenth century had an inaccurate understanding of the real mass of the planet Neptune, discovered in 1846. They thought it was heavier than it really was, and then the only way they could explain its orbit, and that of Uranus, was if there was a sizeable body beyond Neptune exerting a gravitational tug on these planets. So people went searching for this “sizeable body” and eventually discovered Pluto.

However, the mass of Neptune was adjusted downward after the Voyager 2 flyby (launched in 1977) and when this new, more accurate, value for Neptune was plugged into equations for the orbit of Neptune and Uranus around the sun, it was discovered that these values fully accounted for the observed orbits. No need for any sizeable body nearby!

So it was as a result of incorrect impressions of the nature of the outer solar system that American astronomers undertook an energetic search for the ninth planet. Regardless they did find something: Pluto. It was actually in 1930 that an amateur astronomer, Clyde Tombaugh, discovered this small moving object on the periphery of the solar system. Thus Nadia Drake (daughter of famous astronomer Frank Drake) wrote in the July National Geographic:

Uranus traces a predictable boring path around the sun. There never was another large planet tugging at its orbit. But if not for the faulty math, and one man’s prodigious patience [Clyde Tombaugh], we could have waited decades to discover the little world that really is out there.

This situation demonstrates that it depends on the questions one asks, whether one discovers a given phenomenon or not. If the Americans had not been searching for another planet, Pluto might not have been observed until only a few years ago.

Pluto is most often the outermost “planet” but twice during each orbit it crosses Neptune’s orbit as both bodies travel around the sun, making Neptune the furthest out.

By the time NASA’s New Horizons probe arrived at Pluto in mid July 2015, this object of study had been classified as merely one of many “dwarf planets.” When the probe left Earth on January 19, 2006, Pluto was still regarded as one of nine planets, but later that same year the International Astronomical Union (IAU) met to re-evaluate the status of Pluto, and downgraded it. It was now considered merely one of potentially hundreds of dwarf planets. NASA might not have allocated scarce resources to tackle a mere dwarf planet, but the New Horizons probe was already on its way.

Few of the voting members of the IAU considered that study of Pluto would be relevant to study of the solar system planets. But what did they find in 2015? Alan Stern, New Horizons principal investigator, declared concerning Pluto: “[I]n the initial reconnaissance of the solar system, the best was saved for last.”

Well! When we consider the amazing diversity of the planets already visited by our probes, what could possibly be so exciting about a cold, dark and remote body? The answer is, plenty!

If there is one term that could best be used to describe Pluto, and its associated moons, that term is “energetic.” This is very interesting and unexpected because there is no obvious long-term source of energy. It is “déjà vu” all over again! There are so many planets and their moons which exhibit unexpected phenomena. Many of these phenomena (like the rings of Saturn), require a lot of energy to keep them going more than a few thousand years. Astronomers do their best to explain how these phenomena could continue for long ages. The energy from the Sun, and from radioactive decay, and gravitational pull from larger bodies nearby, are all used to try to explain these observations. The interesting thing, in this case, is that none of these sources of energy appears promising as an explanation for the dramatic features of Pluto. 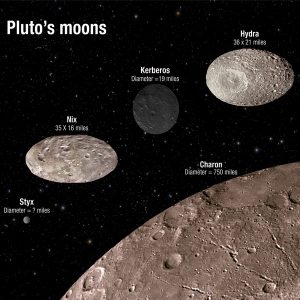 As we proceed toward Pluto, we first encounter five moons. Charon, the innermost and first discovered, is relatively large for a moon with about 11% of the mass of the parent body. Pluto and Charon form the only “binary planet” in the solar system. The two bodies, similar in size, orbit their common centre of mass every few days.

There are also four tiny and more remote moons that display some astounding properties. The four outer satellites of Pluto display masses about 0.001% or less of the parent body. Their orbits take from 20 – 40 days to complete one revolution. In addition, the orbits of these moons are as close as they could be without disturbing each other’s orbit through gravitational attraction. Scott Kenyon commented in Nature (June 4/15) on this situation: “These tightly packed systems place severe constraints on theories of planetary system formation.” Indeed he continued: “How some systems end up with objects in closely packed orbit is an open question.” What Dr. Kenyon is saying is that it would be very hard to propose convincing separate origins for these moons. Yet there are some striking differences.

Named Hydra, Kerberos, Nix and Styx, three of the four moons are shiny and bright. However Kerberos is the exception. As Dr. Kenyon remarks: “Kerberos is as dark as coal and seems out of place with such bright companions.” NASA scientists M. Showalter and D. Hamilton point out that the darker colour of Kerberos raises “questions about how a heterogeneous [wildly dissimilar] satellite system might have formed” (Nature June 4/15).

Drs. Showalter and Hamilton discussed the moon system before New Horizons actually arrived at Pluto. They had already seen enough to realize that the system was unexpectedly energetic for such a cold and tiny body. Thus they declared:

Independent of the new discoveries in store, we have already learned that Pluto hosts a rich and complex dynamical [in motion] environment, seemingly out of proportion to its diminutive size.

Once New Horizons closely approached Pluto, the full realization of the amazing action of the four outer moons was revealed. These small bodies spin at inexplicably high rates. Hydra (the farthest out) rotates once every 26 minutes. Ron Cowen, writing in Eos, quotes Mark Showalter of NASA and SETI, who declared: “This is unlike anything we have seen elsewhere in the solar system. No one has ever seen a moon [like Hydra] that rotates 89 times during a single orbit.”

The other outer moons also exhibit fast rates of spin, with Kerberos rotating the slowest at once every 5.33 hours (Eos Nov.9/15). And Nix, not to be outdone in interest, rotates in the opposite direction from the rest of these moons. So these moons display unexplained energy, and properties that eliminate any common explanation for the origin of all four moons.

And there is more of interest. Dr. Showalter further pointed out that:

The fast spin rates are so surprising because even if the moons formed as rapid rotators, the push and pull of the gravitational tides of Pluto and Charon ought to have slowed down that motion (quoted in Eos Nov. 9/ 15).

So where does all this continuing energy come from? Is the system of recent origin?

If it’s old, why is it so energetic?

Pluto itself displays a surface that seems to require the flow of a lot of energy. The source of this energy is very puzzling because there is no sunlight and no nearby large gravitational fields from large planets. Nevertheless Pluto displays “incredibly complex geology” “beautiful” and “strange” (Nature July 23/15). Scientists reflected on how Pluto displayed “much more geological activity than anyone anticipated” (Nature). Very large seemingly volcanic mountains, white plains with absolutely no craters, and dark plains with craters, suggest an active geology as far as planetary scientists are concerned. And an active geology requires energy.

Based on the density of craters in the dark areas, and on the basis of assumed rates of crater bombardment, scientists estimated that Pluto might be four billion years old. Then they looked at other features and concluded that Pluto has remained geologically active up to the present. The planet, for example is losing nitrogen gas at a most unexpected rate (NASA July 17/15). How many billions of years could that continue? Where is the energy coming from to sublimate the frozen nitrogen?  Well, if it isn’t coming from the outside, then it must be internal, right? Ron Cowen quotes New Horizons scientist Kelso Singer who declared that, “Pluto has enough internal heat to maintain surface activity throughout the lifetime of this outer solar system body” (Eos Nov. 9/15). Some scientists suggest that radioactive decay may provide the energy required to keep Pluto geologically active (Nature July 23/15). With its small size, low density and watery ice exterior, this does not seem a promising explanation. And with every half-life of each radioactive element, the amount of radioactive element is reduced by one half. After several presumed billions of years, there would be very little radioactivity left. And radioactivity would not explain the fast spin rates of the moons, in any case.

Scientists find themselves looking for unlikely sources of long-term energy because they want to explain how the system could have existed for long ages.

Of course, with a recent origin, there is no need to look for energy other than that imparted to the system a few thousand years ago. Pluto is exciting because it displays unexpected characteristics.  Most informed observers expected something that was geologically frozen, but we found a fascinating and active world instead. Like the rest of nature, Pluto testifies not to processes which have continued for long ages, but to a recent creation.

This first appeared in the December 2015 issue. Dr. Margaret Helder is the author of “No Christian Silence on Science.”

Compulsory voting is only for show

Should everyone have to vote? This past September the polling group Research Co. asked 1,000 Canadians if voting should be made mandatory in all fede...