ON THE ORIGIN OF ARTICLES: You thought this article was designed? How unscientific of you!

You might think that someone wrote this article. But of course, you would be mistaken. Articles are not written by people. They are the result of chance. Every intelligent person knows it.

There might be some people who want you to think that articles are written by people. But this view is totally unscientific. After all, we cannot see the person who allegedly wrote the article. We cannot detect him or her in any way. The claim that this article has an author cannot be empirically verified, and therefore it must be rejected. All we have is the article itself, and we must find a scientific explanation for its origin.

Naysayers might suggest that this article bears evidence of design. They might point out that it has a logical flow, that its sentences are coherent, and that it contains creative information. True enough. But this is only evidence of apparent design at best. We must certainly grant that many articles appear designed, as if they had been planned by a mind and written with creative forethought. But to assume that the design came from some unseen, undetectable author would be unscientific.

ALL THIS GENIUS IS JUST GLITCHES

What then is the true origin of articles? We know that articles can be copied. Articles on paper can be duplicated using a Xerox machine, and electronic articles can be copied from one computer to another. We also know that errors can occur in this duplication process. A simple glitch in the computer can result in a letter being changed, or a sentence or paragraph being duplicated or removed.

Most of these random changes would make the article less readable than the original. But such variations would not be copied. (Who would bother to Xerox a bad article?) And so eventually they would be lost.

We must assume that occasionally, very rarely, a mistake in the copy would actually improve the quality of the article – making it more readable and more interesting. In such cases, the improved article would be much more likely to be copied than the original. In this fashion, articles gradually improve, often growing in length, complexity, and interest. It stands to reason, therefore, that all articles started out as a simple word, or perhaps even a single letter, which was gradually changed as it was duplicated due to errors in the duplication process and selection of the more readable variations. 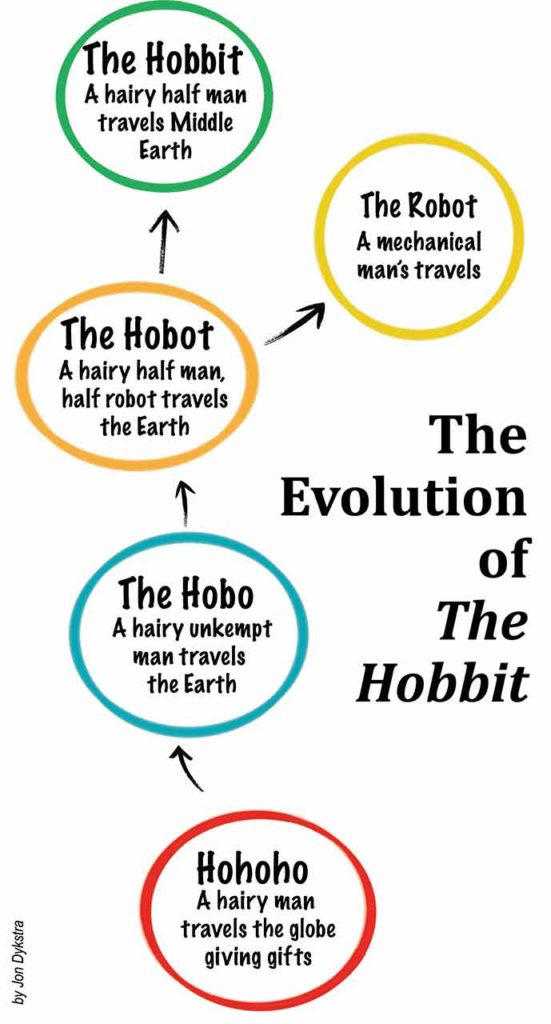 It is also sensible to conclude that all articles have diverged from a common original article which itself consisted of nothing more than a single word. This is obvious by virtue of the fact that all articles have certain things in common. For example, all articles use words. And in all cases these words are organized into sentences. Many of the words used in many articles are exactly the same! For example, the word “the” appears very commonly in almost all articles. Are we to believe that this is just a coincidence? Clearly not. It is evidence that these articles share a common source. They have each diverged from a common article in the distant past.

Naysayers argue that articles are written by people. But would people use the very same words in different articles? The common words, common grammar, and common sentence structure clearly point to a common origin for articles. It is reasonable to conclude that articles which share more common words and sentences are more closely related than those that have fewer common words and sentences. Clearly this extends to larger works of literature – books for example. Books are the most advanced form of literary diversification, and so they must also be the most recent.

WE HAVEN’T SEEN IT HAPPEN BUT…

Critics of our position (“authorists”) might object that we have never seen one article transform into a completely different article. In other words, all observed changes have been only minor transformations.

But is this really surprising? After all, it would take a very long time for an article to have accumulated enough changes to be classified as a completely different article. And people simply don’t live long enough for this to happen within our lifetime. But the fact that all articles share common words is positive evidence that it has happened, even though the process is too slow to see it in its entirety today. We do see minor transformations today. And it is reasonable to conclude that these minor changes will add up to major changes over long periods of time.

Some readers might be bothered by the fact that we do not have a complete record of how the simpler articles diversified into the wide variety of complex articles in our present world. But this does not in any way disqualify our basic thesis that articles do share a common original source. After all, considering the trillions of variations that must have existed and been destroyed in the vast time necessary for this process, we would expect that the record of links in the chain would be fragmentary at best. And we do know of some links. For example, there are several minor variations of the book The Hobbit. These are known to exist, and it is obvious they stem from a common original. So it is perfectly reasonable to conclude that all works of literature share a common source.

THIS WOULD TAKE A LONG TIME

Given the slowness of the diversification of articles, it is reasonable to conclude that articles are far older than “authorists” assume. The process of an article becoming longer and more interesting likely takes millions of years – perhaps even hundreds of millions of years. It may even happen in spurts, rapid diversification followed by long periods of relative stasis. This may account for the fact that we find so few intermediate forms in ancient libraries.

One objection to our position is the idea that some sentences in some articles contain a degree of “irreducible complexity.” This is to say that even a minor change of any kind would make the sentence unclear or unreadable. However, this notion fails to consider that multiple simultaneous changes – though rare – can occur in the process of time.

The fact that we cannot conceptualize an intermediate sentence does not actually prove that no such intermediate is possible. The process by which articles diversify from a common source is still being studied, and so we do not have the answers to every detail yet. But this does not mean that such answers will not be forthcoming in the process of time. The formation and diversification of articles from a common source is a scientific fact and well supported by the evidence even though some of the details are not yet understood.

BELIEVING IN AN AUTHOR IS BLIND FAITH

To assume that articles have an author is a faith position. It is a belief in something that cannot be perceived with the senses. As such, it is unscientific and should be rejected. If some people feel that they must believe in an author, that’s okay, but please remember that your view is religious and not scientific. Please don’t force it on others or teach it in school.

Just think about it. This very article which you are now reading is the result of countless copying errors which gradually increased its length and complexity over time. How amazing that such a process of nature has resulted in so many wonderful works of literature! Such literature is not the result of some mysterious, unseen, undetectable “author.” It is simply the inevitable result of the mindless duplication process working over unimaginable periods of time.

This article was first published on JasonLisle.com and is reprinted here with the permission. Dr. Jason Lisle is the founder of the Bible Science Institute.

How do you go about telling the difference between an object formed by chance and one that has been designed? What distinguishes the designed object? How can you know this article was designed?

Loneliness can make you pretty sad. In lonely times, you may ponder your relationships and realize that they are superficial. Perhaps you have wanted ...