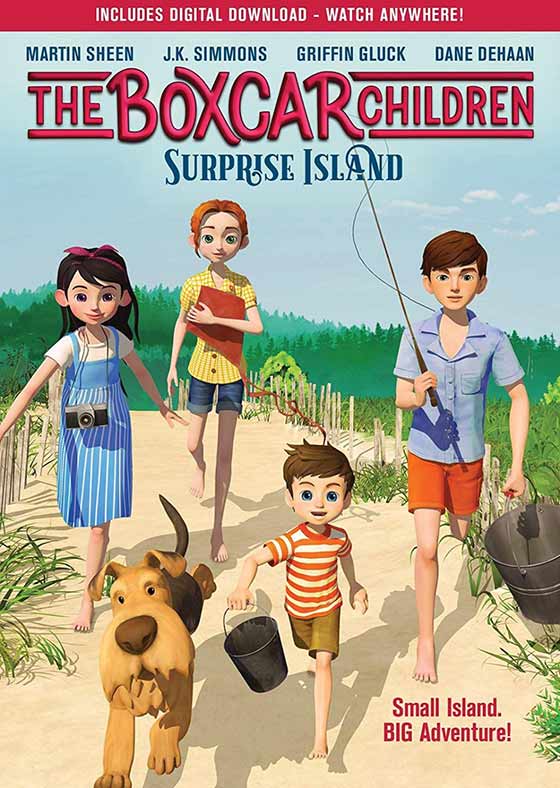 My kids loved this – we rented it for two nights, and they asked to watch it twice. So why give it just a 6 rating? Because what makes it attractive to gentle, easily scared, children is also what makes it a below average film: there is no conflict.

Summer vacation has arrived, and Grandfather Alden wants to take his four grandchildren to an island their family owns. He leaves them there, and with the exception of a couple minutes when the children are trapped in a cave just as the tide comes in, this is an entirely calm film. Grandfather Alden leaves them on the island alone, but the only other “danger” they have to deal with is a leaky roof.

This is a sequel to the slightly better 2013 film The Boxcar Children. Both movies are based on the beloved 150+ book series originated by Gertrude Chandler Warner way back in 1924. According to the bonus features on this DVD, Warner set out to make a story for Grade 1 and 2 students that would use the 100 most important words for them to learn. I found that rather telling – it makes the books out to be more about learning vocabulary than presenting kids with a rip-roaring adventure. And if that was her intent, she has succeeded.

The only caution I can think to include is that the movies make no mention of God (Heaven comes up once, but not God) and on such a beautiful island, where it would be hard not to break into song and shout His praises, this is a glaring absence (kids might not notice God’s absence, but mom and dad can bring it up). In the series a brief reference to evolution pops up in every second or third book, and that, along with God’s absence in the books and films, makes me suspect that author Gertrude Warner was probably not a Christian.

So far I’m not exactly singing the praises of the book series, or this, the latest film based on them. So why recommend the movie at all?

Because younger kids, particularly those who are familiar with the Boxcar Children already, will absolutely love it. My critique of the book and this movie is not that there is anything wrong with them; it’s only that there is nothing remarkable about them. The acting is okay, the animation is middling, and the story, from a parental perspective, is on the boring side.

But on the other hand, there are no language, violence, sexuality, or other concerns. And young children, up to maybe 8 or 9 years old, will enjoy the familiar characters and the cozy comfy safety of this no-conflict story. It is a nice safe film for your family movie night. Kids should learn to endure story tension – their own life’s story will not be free of it – but when they are young a small dose of fluff every now and again won’t hurt.