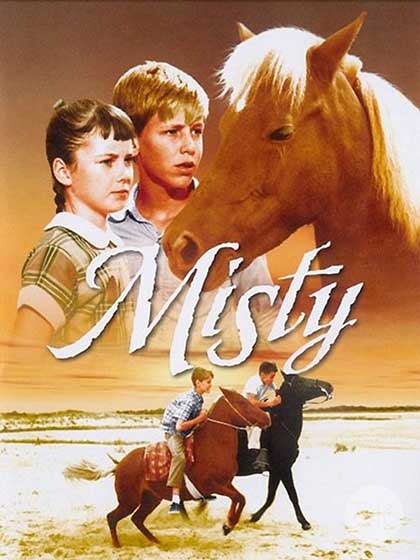 If you have girls in your home there’s a good chance you’ve already heard of Marguerite Henry and her most famous book Misty of Chincoteague. It’s the story of two orphans who, after coming to live with their grandparents, fix their minds on buying a pony named Phantom.

But it’s not going to be easy. First, Phantom is a wild pony, running loose on the neighboring island of Assateague, and to this point no one has been able to catch her. If she is caught, it’ll cost the two children $100 to buy her and they don’t have any money. And last but not least, Phantom is three years old already, and their grandfather says that no one can gentle a pony that’s been wild that long.

These two have their work cut out for them!

This is a faithful adaptation of the book, and quite the sweet film. The grandparents are loving and kind, but no pushovers. The kids are energetic, a little mischievous, but respectful. It’s just good old-fashioned family entertainment.

Language concerns are limited to a few instances of “gee.”

At one point bets are placed on a horse race between the nearby islands’ fastest ponies. The grandfather gets caught up in this and seems to even travel to another island to find more people to bet with. Overall this is a minor element in the film, amounting mostly to an opportunity for jokes. But children need to be told that we should never seek to become wealthy at another’s expense – that’s what’s wrong with gambling.

The moral of this story is an old-fashioned one, and while powerful, it is gently presented: “love is not possessive; love seeks the best for the other.” I’m not going to spoil things by telling you how that moral is learned, but if you have a sensitive daughter or two, there might be a little crying at the end of this one…though it certainly ends on a happy note.


Sweetest quote: When the town mistakenly concludes the grandfather has fallen on hard times, he hugs his grandchildren and exclaims: “They think I’m poor? I’m the richest man on this whole island!”

This is reprinted with permission from ReelConservative.com.

by Sigmund Brouwer and Hank Hanegraaff 2004 / 428 pages It’s the year 65 AD, and Gallus Sergius Vitas is one of the last principled men in Rome....

This comes under the category of: “Come and see what God has done: He is awesome in His deeds...” (Ps. 66:5). A country notorious for forced ste...