“Inferior” design: a proof of evolution?

“Suboptimal” design in nature is supposed to be the result of, and evidence for, evolutionary trial and error

Everybody loves to hear about wonderful living creatures with their amazing talents. It is certainly uplifting to learn about Monarch butterfly’s continent-spanning migration, and the toe pads of the gecko that allow it to walk upside down, and the amazing strength of spider silk. Christians enjoy discussing the wonderful designs that we see in nature. And among scientists, these creatures have their fans too. Indeed, there is an entire field in science called biomimicry where scientists try to learn from living creatures in order to produce practical designs for modern application.

But not everyone is equally enthusiastic about the implications of these amazing talents. Prominent evolutionist Stephen Jay Gould (1941-2002) in 1978 wrote:

“…ideal design is a lousy argument for evolution, for it mimics the postulated action of an omnipotent creator.”

Dr. Gould thus said that everyone should ignore examples of wonderful design and concentrate on phenomena that are below par. He continued:

“Odd arrangements and funny solutions are the proof of evolution – paths that a sensible God would never tread but that a natural process, constrained by history, follows perforce.”

Gould was telling us that he knew how God should act if, that is, God really existed. God, according to Gould, would make everything perfect. And since we know that everything is not perfect in nature then, said Gould, this proves there is no God. This kind of argument, based on assumptions of how God should act, continues to be common in science today. There is thus a lot of interest among scientists, in suboptimal (less than perfect) design. Let us look at some examples to see what the implications are. 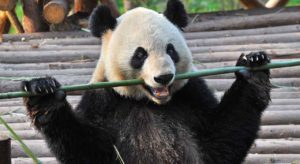 The example Gould discussed in 1978 was the thumb of the Giant Panda. These animals, native to China, eat almost nothing but bamboo shoots. They use their hands to strip off the leaves, leaving the nice tender shoots on which to munch. Their flexible hands are unusual – they have a thumb of sorts, an extra structure produced from an enlarged wrist bone, with associated muscles and nerves.

Gould declares that this extra finger is a “somewhat clumsy, but quite workable solution…. A contraption, not a lovely contrivance.” Here he was declaring that the panda’s thumb was of suboptimal or inferior design, which thus constituted proof that the source of the thumb was evolutionary trial and error rather than from a “divine artificer” (supernatural designer).

A major argument employed by many evolutionists, even today, is to point to suboptimal (inferior) design and to declare that this proves that evolution was the source rather than God. However, what makes something “suboptimal” is an open question. Sometimes a phenomenon that appears less than ideal actually displays superior and unexpectedly sophisticated design. Gould might not like the panda’s thumb, but there is no denying how wonderfully this thumb gets the job done.

Another example: the inner ear of humans includes a spirally coiled structure called the cochlea. Lining its interior are very fancy hair cells which, by their motion, amplify the sound. The whole cochlea functions as a remarkably sensitive and finely tuned sound detector. However, at the same time, it also distorts the sound. Might these distortions be considered inferior design?

A study in 2008 (Nature, Nov 13) demonstrated that the distortions actually contribute to clarity of sound. The distortions come from a particular structure connecting the top of the various hair cells. Mice without this connector in their cochlea became progressively deaf.

Who knew distortions were so useful?

A recent article published in the online edition of the Proceedings of the National Academy of Sciences (November 4-8) discussed another counter-intuitive (contrary to our expectations) situation. The study was conducted by engineers trying to build efficient robots. This is a large field of research.

The designers want systems that are not only stable but maneuverable. The problem is that these are opposite objectives. In general, the more maneuverable a robot is, the less stable it is. If your robot tips over, clearly it is not going anywhere. Alternatively, the more stable a robot is, the less one can fine-tune what it does – the harder it is to make sudden changes of direction. Thus your robot may be able to proceed briskly straight ahead, but what if you need it to turn a corner or climb over an obstruction? Will it be able to turn, or will it instead tip over?

Animals obviously have no such problems. That’s why engineers have turned their attention to animal locomotion. They ask themselves, how do animals achieve the “impossible” combination of stability and maneuverability? How indeed do actual insects like cockroaches manage their excellent locomotion skills? Biologists may have already observed the solution without recognizing its significance. Why, many biologists have wondered, do animals move in directions that are different from their desired destination? Why, for example, do cockroaches and lizards tilt from side to side as they run forward? An engineer would most likely eliminate these motions, which seem to waste energy, as they do not obviously contribute to the forward motion. Lately, however, mechanical engineers have begun to research how unexpected, “inefficient” movements may benefit these animals.

Insight into this mystery recently came from studies of a tiny fish from the Amazon basin. In order to avoid predators, this fish prefers to hide in various shelters such as tiny tubes. Scientists used slow-motion video to study fin movements of this fish as it finessed its way into its hiding places. At 100 frames per second, a strange situation became apparent. The fish was using one part of the lower body fin to push water forwards, and the other part to push it backwards. This was definitely against common sense since it was like two propellers fighting against each other.

When scientists built a fishy robot, they found that the opposing forces actually improved the stability and maneuverability of their model. The assumption of the engineers that it is wasteful or useless to employ forces in directions other than the desired forward motion had now been proven wrong.

Apparently, the same principle applies to the motion of many other creatures. The take-home lesson is that what, at first glance, appeared to be inferior design (opposing forces) actually turned out to be superior design! 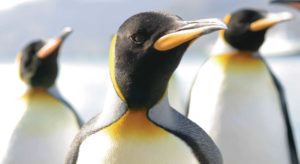 Another recent robotic study which shows promise is one inspired by the talents of emperor penguins. While these creatures look pretty inept on land, in the water they can accelerate from 0 to 7 meters/second in less than a second (a veritable rocket).

One student at Caltech’s Aeronautics Department set out to create new propulsion technologies with high maneuverability and improved hydrodynamic efficiency. The new mechanical design is based on the penguin’s shoulder and wing system and features a spherical joint with various other technical features. Concerning the promise of the study, the student declared that the manner in which penguins swim is still poorly understood. Nevertheless, by accurately reproducing an actual penguin wing movement, he and his collaborators hope to shed light on the swimming mysteries of these underwater rockets (ScienceDaily.com November 14, 2013).

There are many other examples of unrecognized excellence in design. For example, the compound eye of insects and other invertebrates is often considered to be less ideal than our own camera eyes. However, a recent study that modeled the compound eye found that it does offer some advantages over the camera style eye (Young Min Song et al. Nature. May 2, 2013).

Specifically the compound eye provides for an exceptionally wide field of view, and secondly such an eye has a nearly infinite depth of focus. As an object recedes away from the eye, the object becomes smaller, but it still remains in focus. It is apparent that in the case of eye design, there is no such thing as inferior design. There is instead good design that is more applicable to certain applications than to others.

Obviously however there are many situations in nature that are less than ideal. This is a fallen world and there are many cases where we see distressing phenomena. The secular argument that a good God would never mandate inferior design is simply not valid. God cursed nature as a result of man’s sin, so we have no reason to expect wholesale perfection, and the former “very good” creation now displays many inferior design choices. For example in Job 39:13-17 we read:

The wings of the ostrich wave proudly,
but are they the pinions and plumage of love?
For she leaves her eggs to the earth
and lets them be warmed on the ground,
forgetting that a foot may crush them
and that the wild beasts may trample them.
She deals cruelly with her young, as if they were not hers;
though her labor be in vain, yet she has no fear,
because God has made her forget wisdom
and given her no share in understanding.

Clearly, the breeding behavior of the ostrich is suboptimal but nevertheless designed by God. Yet “when she rouses herself to flee, she laughs at the horse and his rider” (Job 39:18). The strong legs of this bird and her running prowess also come from God. These gifts are a strong contrast to the behavioral deficits of the ostrich.

The evolutionists think they have proven that God did not work in nature. However, since their argument depends upon a discussion (however faulty) of the nature of God, this is a religious argument. Since they claim to have ruled out all religious arguments, then how can they use arguments concerning what God would or would not do – arguments touching on the character of God – to prove evolution? They need to make up their minds. If they want to explore the character of God and why He’d allow brokenness in the world, then let’s open our Bibles.

As for Christians, despite the fallen condition of the world, we can still enjoy and benefit from, and give thanks for, the many wonders of creation as coming from God’s divine wisdom.

This article first appeared in the January 2014 issue under the title ” Upon further reflection…” Dr. Margaret Helder is the author of “No Christian Silence on Science.”

The case for biblically-responsible investing

God calls his people to be good stewards of what He has entrusted to us, whether that’s our talents and time or the possessions we’ve been given. ...

The Bible and Alcoholics Anonymous

The following is a transcript of a Feb. 21, 2016 Truth in Love podcast produced by the Association of Certified Biblical Counselors (ACBC) and used h...

WHAT’S INSIDE: Chief concern with Conversion Therapy Law / Bill C-4: How the Conservative Party did this to Canada / Why history matters / The art o...

For many years, we were told that the human appendix was a leftover of our evolutionary development and the proof was in the fact that it does nothing...