Incredible Creatures That Defy Evolution I 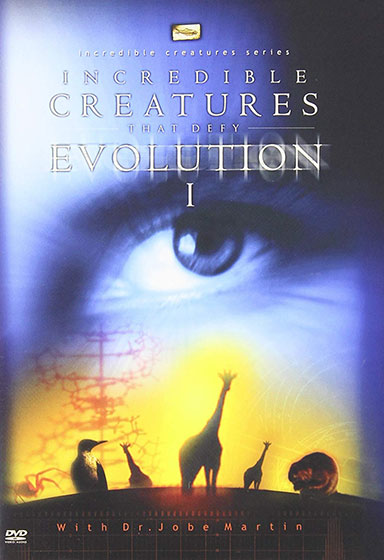 As narrator Dr. Jobe Martin explains, he was once an evolutionist and only became a creationist after getting challenged by one of his students. While he was a professor at a dental college, he gave a lecture on the evolution of the tooth – he taught his class that fish scales eventually migrated into the mouth and became teeth – but two students didn’t agree, and they encouraged him to investigate creation science. He’d never heard of creation science but was willing to take a look. And the closer he looked, the more he realized that much of the evolution he believed in was based on not on fact but assumptions.

His study led him to investigate animals and other creatures, and in this short documentary he shares some of the most incredible features of some pretty incredible creatures that forced him to acknowledge that there was a Master Designer behind all this. For example, did you know:

Dr. Martin shows us why we should be amazed by many other creatures including: the beaver, the Australian incubator bird, the platypus, the chicken egg, the chuckwalla lizard, the gecko, and us humans.

My preschool daughters were amazed, and while this is a video primarily intended for children, my wife and I were also engaged. We were floored by just how creative God is. It is good family viewing, with enough pictures and film footage to keep the attention of the very young, and for parents, there’s a narrative that highlights God’s sense of fun and His genius.

It’s important to note this is just a children’s video, and not intended as something you’d hand your harden-nosed evolutionist friend. Incredible Creatures isn’t meant to offer an overly detailed or complete argument against evolution, and adult critics would likely seize on that lack of depth to dismiss it entirely.

So get it for your own family or your Christian school. And if you know someone dead-set on evolution, then consider Evolution’s Achilles’ Heels and its more mature, thorough anti-evolutionary argument.

There other two films in this films in this Incredible Creatures that Defy Evolution series are all good, but this first one is the very best of the bunch. You can buy it many places online, and for a four-minute peek, check out the trailer below.

Documentary 62 min / 2011 Rating: 7/10 The folks who brought us the 3-film series Incredible Creatures That Defy Evolution are back, and with a fun new twist on the incredible design we can find in God's creation. This time they are looking into the field of biomimicry – this involves engineers applying the innovations and creativity they find in the natural world to help them solve challenges they face in the civilized world. So, for example, a fan manufacturer looking to make a more powerful, but quieter, model decided to look into the way that an owl can travel quickly but silently through the air. The closer they looked at the design of its wings, the more they found there was to learn and imitate! Other examples of brilliant design in creation that the documentary explores include: sticky burrs spirals found everywhere in nature the glue used by mussels the aerodynamics of the box fish and the strange way that butterflies can give off such beautiful colors even though some have no pigment in their wings. In one instance after another, even as engineers use Nature as their inspiration, they're forced to admit that their best efforts can't match the genius they find there. CAUTIONS Unlike the Incredible Creations The Defy Evolution series, in this film God is never given the credit that is His due. Instead, this is more like an Intelligent Design presentation, in which the genius found in creation is celebrated, without any specific mention made of Who that Genius is. The only other caution concerns a scene in the section on mussel glue. Here we see a brief enactment of a man having a heart attack at a restaurant. He then presumably receives care using glue, rather than stitches. It's not all that shocking, but more so than anything else in the film, and might alarm some small children. CONCLUSION This is one for that will most intrigue the science geeks among us. I think families with older kids – maybe 12 and up – could enjoy this together, particularly if they have watched documentaries together before. But it does require some knowledge to fully appreciate what's being explained – younger children simply won't know enough about aerodynamics, or about how loud fans can be, or what pigmentation is, to really appreciate how "Nature" – God! – has done it all so much better than even our best and brightest can do (even after being given an example to imitate). This is reprinted with permission from ReelConservative.com. Incredible Creatures That DEFINE Design - Trailer from Exploration Films on Vimeo....

If you're a reader, there's a good chance you have a stack of books somewhere that you've really been meaning to get to. But, what with the busyness o...

Faster, faster! (5 min) Two friends race down a marble maze - it's some innocent fun for the kids. These buddies also appear in "Don't smash." T...

Recently a colleague commented on the fear that some have about social media, and their resulting reluctance to open Facebook accounts. She said it re...