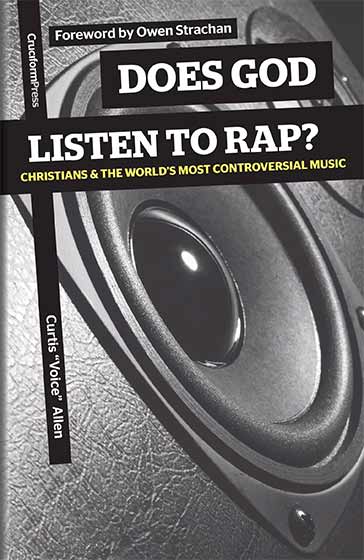 “Why wouldn’t He?” That’s the answer the author gives to his title question.

Whether you agree or don’t might depend on what you think of Rap’s sinful origins. In chapters two and three, in the space of just 25 pages, author Curtis Allan gives an authoritative, detailed account of these beginnings. He explains it started back in the late ’60s, and that even though some earlier innovators tried to use Rap to promote a social consciousness, it was the pimp/drug dealer-glorifying “Gangsta Rap” that ended up dominating the genre.

Allen then investigates whether its sinful origins are reason enough to dismiss Rap. If they are, what then, he asks, are we to do with music itself, which seems to find its origins in the sinful line of Cain (Gen. 4:21). A good point, but I think a stronger argument should have been made with more examples, since this is a key point. It is a fallacy – the “genetic fallacy” – to condemn something simply for where it comes from. We don’t do that with classical music composed by immoral composers, or foreign foods from pagan cultures, or anything else, so why would we do it with Rap?

One very large issue that is left unexplored is whether the driving beat of Rap impacts its appropriateness for conveying Christian content. That is a significant omission, since this is the question for some Reformed Christians. Allen describes the lyrics as the content, and the music as the context. And to him it seems it is only the content that matters. The context – the music – seems to be almost a neutral aspect.

But this overlooks the way different sorts of music can impact us in distinct ways. For example, the thumping beat of Rap conjures up very different emotions than the rising swell of the string section in an orchestral piece. The beat might spawn feelings of aggression. This is the sort of music we would warm up to for a basketball game, or might want on our iPod when we go running – it drives us. Some orchestral music can tug at the tear ducts, bringing moisture to the eye of even the most stalwart of men. So music is far from a neutral, unimportant aspect of Rap – it brings the power to the words. I would suggest that there is a reason that Rock and Rap, with their thumping beat, are closely linked with sex, drugs and perversions of many sorts: the beat does get us aggressive, it does get us riled up, and if that energy isn’t put to good use, it will be put to bad.

God calls us to self-control

That doesn’t mean Rock and Rap are inherently bad – aggression is not an inherently bad emotion.  But Rock and Rap are known for encouraging people to “lose yourself in the music” while God says we must instead be controlled. So we need to be aware of the emotions Rock and Rap can stir up, and ensure that they are properly channeled and directed. We need to ensure these emotions are constrained and controlled. There is a reason that the Billboard Top 100 is filled with sexually perverse songs – this is the aggression unrestrained.

However, this aggression need not be unrestrained. A songs lyrics can do a lot to properly direct and control the emotions the music stirs up. But if we are going to control these emotions, we have to understand that the music – the context – is far from neutral or insignificant. It is the music that brings the power to the words.

So this is a topic that should have been explored. However, the book is just 99 pages, so, clearly, it couldn’t cover everything and what it does cover is well worth reading. In fact, it is worth buying for the historical background alone.

This review first appeared on ReallyGoodReads.com.

If you want to foster a love for reading in your children, it's never too early to start reading to them. Even newborns will tune in when a parent cra...