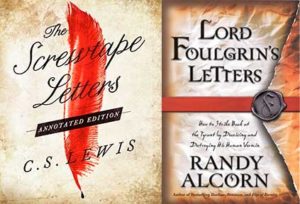 Some 75 years ago, as C. S. Lewis reports it, he intercepted correspondence between two devils, the one a senior demon and the other his student being taught how best to tempt and attack Man.

While Lewis refused to share how he’d come by these letters, the published correspondence was eye-opening, giving insight into how the Devil can twist not only our weaknesses, but even our strengths, to his devilish ends. So, for example, we get to listen in as the experienced tempter Screwtape teaches his charge, Wormwood to sidetrack prayer, either by making it perfunctory – perhaps done regularly, but with little to no thought – or by making it feelings, rather than God, focused. Either diversion will do.

While Lewis wrote (or discovered) The Screwtape Letters during World War II, it remains as insightful and as helpful as ever. But it was also a book worthy of imitation, and nearly 60 years later Randy Alcorn did just that, with his Lord Foulgrin’s Letters. However, while Lewis stuck strictly to devilish correspondence, Alcorn alternates between letters and story chapters – it is half mail, and half narrative. The narrative sections make Alcorn’s book a little more accessible for a teen audience, while, on the other hand, Lewis’ is the more insightful, which also makes it the most satisfying of the two for adults. But both are excellent.

One caution: both books have an Arminian flavor, and, as my brother Jeff points out, “whether this Arminian tendency is simply the devil’s mistaken understanding is not clear, but Lewis at least seemed to be Arminian in his other writing.” That means, while both books can serve as a warning of the devil’s many means of attack, there’s at least a few that Lewis and Alcorn overlook.

I understand that some might find the devilish focus of both books disturbing. It might seem wrong since Christians don’t normally want their children reading books about demons. What makes Alcorn’s and Lewis’ books different from the devilish taint that exists in so much of today’s entertainment (Hellboy, Sabrina the Teenage Witch, DC Legends of Tomorrow, etc.) is that Lewis and Alcorn expose, but don’t celebrate, the darkness. They are equipping readers to be aware of the Devil, not asking them to join him.

That’s quite the difference indeed.

Below is a 8 minute adaptation/preview of Lewis’s “The Screwtape letters.”

I was recently confronted with the disturbing statistic that evidences the ultimate case of gender inequality: the life expectancy of males is 6.1 yea...