Super creative? Ultra creative? Mega creative? Every good picture book author is imaginative, but somehow David Wiesner (1956- ) manages to be all the more so. His living clouds, flying frogs, and artistic lizards always provide a surprise – a reader starting one of Wiesner’s stories will never be able to predict how it is going to end. That’s a joy for parents to experience right along with their kids: a children’s story that isn’t predictable!

And since several of Wiesner’s works are wordless, they can also be great books for reluctant readers to tackle alongside mom or dad. Wordless doesn’t mean it’s an easy “read” but together parent and child can put their detective skills to work to figure out all that’s going on!

What follows are my family’s recommendations – our favorites – and then a few that we’ve read but which for this reason or that, I’m not going to recommend like the rest. Finally, there are three that really aren’t worth bothering with. 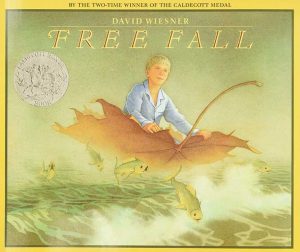 A little boy falls asleep and we get to come along in his dream. As dreams often are, this is wordless throughout, one page streaming into the next as the boy goes from meeting a dragon to growing giant-sized, to flying home on a leaf. It makes sense only in the ways that dreams do. But the smart-eyed reader will be able to spot on the last page, when the boy wakes up, all the objects in the room that inspired the different parts of his dream. This is one to “read” slowly and enjoy every picture.

Two brothers are worried about a coming hurricane. But when the lights go out, and the family is still together, the boys realize it’s not so bad after all. It even gets quite good the next day, when they discover a huge fallen tree in their neighbor’s yard. In the days that follow the huge trunk becomes their spaceship, and the branches a jungle, and the both of them together a pirate-hunting sailboat.

Tuesday
1991 / 32 pages
The only words we see tell us the time, and that it is a Tuesday. For reasons that are left entirely mysterious, at around 8 pm, a swarm of frogs suddenly starts flying (or is it their lily-pads that are doing the levitating?). They flock into town, chase some birds for fun, watch a little telly, and then, just as they are heading back, dawn breaks, and the sun’s rays seem to sap their flying powers. That leaves the whole lot of them hopping back to their pond. This is silly nonsense and kids are sure to love it. 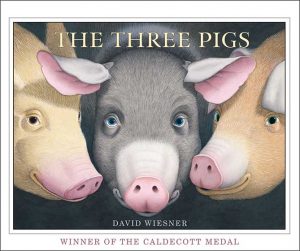 1999 / 48 pages
A boy on a field trip to the Empire State Building meets a rambunctious cloud (he discovers that clouds are people!) who takes him back to “Sector 7” high up in the sky where the clouds get their orders about what shape of cloud they should be. But the clouds seem a bit bored with these shapes and appear to ask the boy to draw them up some alternatives. And what fun to see clouds mimicking the sea creatures he draws! Eventually, the rambunctious cloud returns the boy to the Empire State Building, but his visit to Sector 7 might have some lasting impact, as the clouds quite like being fish-shaped. This is another of Wiesner’s wordless books and another one that parent and child will have pouring over to see all that the pictures have to say.

The Three Pigs
2001 / 40 pages
When our middle daughter discovered this one she just had to share it with her younger sister right there and then. This is a creative spin on the old tale as the Big Bad Wolf blows the pigs right out of the story and into some others (including Wiesner’s own The Loathsome Dragon). As they travel from storybook to storybook the pigs decide there is no place like home, but also decide to bring along a guest from another story – a dragon! – to give this pesky wolf quite the surprise. 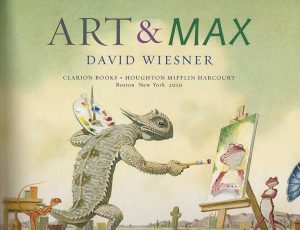 2010 / 40 pages
This might be my favorite picture book. It involves just two characters, which makes this one easy to read out loud to the kids, and there’s so much energy on each page that performing it becomes so easy to do. Art knows how to paint, and Max desperately wants to learn. (Both are lizards, but aside from the fun way they look, that doesn’t really matter.) But who should Max paint? When Aurthur suggests himself, Max literally starts to throw paint on Art. And that’s when it gets wacky! As Max tries to clean the paint off Art, he starts to clean all the color off him. Art is see-through; he’s just lines! Then, when that line starts to unravel, Art becomes just a scribble. Fortunately, his friend Max is on it, and proves, as he turns that scribble into a work of Art, that he has some mad skills too.

I Got It!
2018 / 32 pages
Once again David Wiesner lets the pictures do (almost) all the talking, When a long flyball is hit into the outfield, a boy declares, “I’ve got it!” which are the only words in the story. But does he really have it? One dropped ball is followed by another, and it’s almost like there are obstacles (getting bigger and bigger) just reaching out to trip him up. His repeated drops have his teammates moving in closer to catch it for him, since he can’t. But then, in one last stretching leap, our boy in red jumps past the obstacles and beats his teammates to the ball for a wonderful game-winning catch. This is a very fun story, but I could see some kids needing a little help to understand what’s going on. But hey, reading together is fantastic!

TAKE IT OR LEAVE IT

The Loathsome Dragon
1987 / 32 pages
An evil queen/stepmother casts a spell which turns a princess into a loathsome dragon. Along comes a brave prince who has to kiss the dragon three times to break the spell. The only twist in this tale is that the brave prince is her brother, and not a husband-to-be, but that’s not enough to make this seem fresh. I should add that while I was unimpressed, my girls liked this a lot more than I did. 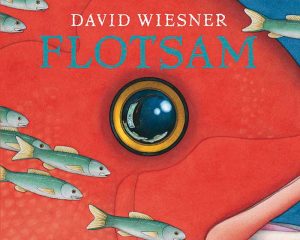 1992 / 32 pages
A young girl, Holly, sends vegetable seedlings into the ionosphere for her science project just to see what might happen. Soon after giant vegetables – house-sized and bigger! – start floating down from the sky. But wait! Some of these vegetables are not the sorts that she sent up. So where did those come from? At book’s end we discover the giant vegetables came from a giant alien chef accidentally losing his ingredients while flying above Earth. Very fun to see the giant vegetables all over the landscape but I think it would have been better without the aliens tacked on at the end.

Flotsam
2006 / 40 pages
When a boy discovers an old-style underwater camera washed up on the beach, he brings the film in to be developed. There he discovers pictures, seemingly taken by underwater creatures themselves, and the world that they live in when we aren’t looking is certainly something to behold: little mermaids and mermen, robotic fish, giant turtles carrying shell cities on their backs, and even what looks like aliens taking rides on the guppies. Done without any text at all, each picture is another discovery. The very last snapshot is of a girl holding up a picture. And in that picture is a boy holding a picture of a girl holding a picture of a boy. A look through a magnifying picture shows this goes deeper still, and further back in time. The boy’s microscope reveals more still layers to the photo. This is inventive and fun, with the only cautions being that the young target audience may have to be informed that though the photos look quite realistic, the aliens and mermen are fantasy, not fact.

Mr. Wuffles
Tiny tiny aliens have landed, but unfortunately for them, their ship attracts the attention of Mr. Wuffles, who thinks it’s one of his cat toys. To repair their ship the little aliens recruit help from ants and bugs – their treasure trove of lost marbles, pencils, loose change, and paperclips turn out to be just what the aliens need to fix things up. There’s some vague religious-type imagery written by the bugs on the house walls that, along with the aliens, makes this one I’d rather just skip.

Fish Girl
Wiesner’s only graphic novel is the story of a mermaid girl kept captive in an aquarium by the owner who she believes is the god Neptune. It’s odd all the way around, and that she is swimming around topless for most of its 192 pages (though always with strategically placed hair, or fishes) makes this another good one to skip.

Robobaby
Robots get their babies in a box, with some assembly required. This story has its quirky charm, but when Mom and Dad, Uncle Manny, and even the Robobaby tech service can’t assemble Junior properly, but the child amongst them knows just what to do, this become just one more adults-are-dumb-and-kids-know-everything story that we can really do without (Prov. 20:29, 22:15).

David Wiesner is an incredibly imaginative picture book author, which makes him very fun to read, but it’s that same active imagination that seems to lead him into a bit of over-the-top weirdness now and again. I couldn’t figure out what Wiesner’s worldview/philosophy is, and it’d be a bit much to conclude he must not be Christian just because he features aliens on occasion, though aliens (at least the intelligent sort) would seem to be incompatible with Christianity (but demons masquerading as aliens would not be). However, there’s nothing in his books that would give us reason to conclude he must be Christian. In lieu of evidence one way or the other, that’s good reason for parents to approach his future output with some caution.

Finally, if you have a reluctant reader, Wiesner’s wordless books – Freefall, Tuesday, Sector 7, and I Got it! – might be an encouragement for them to page through, especially if mom or dad comes alongside.

Government is spending over half of what Canadian families earn