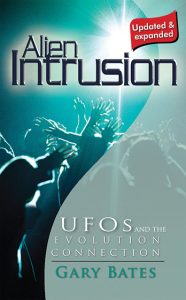 Are people actually being abducted by aliens? That’s the question being asked by this book…and the recently released documentary based on it. The author is Christian, so you might expect he’d answer with an emphatic “no” but Gary Bates response could best be summarized as, “sort of.”

The way the book is structured, Alien Intrusion could be given to anyone, Christian or not. The cover and first few chapters hardly give a hint that this is a Christian book since, initially, it seems to be making a case for UFO’s and aliens. Bates notes that millions of people, including a past president of the United States, claim to have seen a UFO, and he discusses how many popular TV shows, likes Star Trek and various science fiction movies like 2001: A Space Odyssey assume that aliens are somewhere out there.

But after delving into what people think about aliens and UFOs the author then begins, step by step, to explain why aliens could not possibly be visiting us from other planets. Most of the reasons are simply practical – the distances are too far and the energy needed simply too immense.

Despite the fact that it is physically impossible for aliens to be visiting us, the author doesn’t believe that every story of alien abduction is simply a lie or a delusion. After debunking many famous “UFOlogists” Bates notes that there are still too many ordinary folks making abduction claims – people who have nothing to gain, and personal credibility to lose – to simply dismiss the phenomenon altogether.

This is where the book starts to become clearly Christian. The author argues that it is only now that our world has embraced evolution (and dismissed God) that UFO sightings have become so prevalent. There is also a strong correlation between UFO belief and occult experimentation – many of the more famous “UFOlogists” have also dabbled in the “dark arts.” It is worth noting, too, that the messages “aliens” pass on are often direct attacks on the Bible, portraying Jesus not as the Son of God, but merely as some advanced alien.

So are people being abducted by aliens? Bates argues that while some people may indeed be having these encounters it is not with aliens but rather with demons masquerading as extraterrestrials.

Now, I’ve not yet seen the 2018 documentary of the same name, but the trailer (see below) looks promising. I suspect that it follows the same sort of format, first presenting the evidence for an alien intrusion, before then explaining why it just isn’t so.

As for the book, it is fantastic, and a great gift for anyone interested in science fiction. Bates employing a solid Christian worldview to separate the fact from the fiction.

Are you “blessed” or “privileged”?

They might seem close synonyms but the Devil is in the details **** A couple of years back a viral video showed a large group of older teens getting...

How the Snake Crusher brings us back to the garden by Kevin De Young 120 pages / 2015 I read this over three nights to my kids but if it had been...