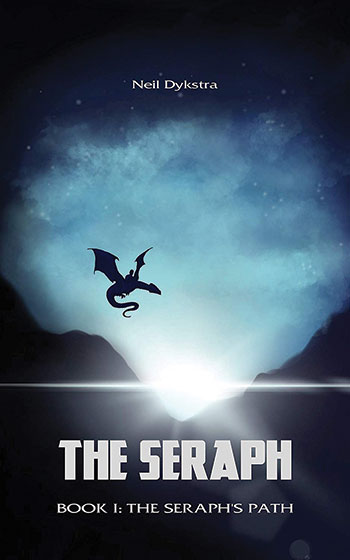 Maybe I should have gotten someone else to review this, what with me sharing the same last name as the author. But this is a fantasy title, so I had to take a peek. And once I got started I wasn’t going to hand it off. Besides, the two of us aren’t actually related. I know Neil, but only well enough to recall he is the superior volleyball player, and nowhere near well enough to have had an inkling he could serve up something like this. It’s remarkable!

The Seraph’s Path has quite the cast of characters, but it is mostly the story of Dyrk, a young horse trainer who wants to make something of himself, in part, because his parents don’t seem to think about him much at all. Our story begins with Dyrk determined to enter a competition his father won’t even let him watch. Somehow he finagles his way in, and reaches the final round, a free-for-all among 16 mounted soldiers-in-training, with the last man standing guaranteed entry into the King’s own College. I won’t tell you what happens, but I will say that for every good thing that happens to Dyrk something bad soon follows…and vice versa.

The wonder of fantasy fiction is that anything can happen. Young children can open a wardrobe and get transported to a world of talking beasts. Or little fellows with hairy feet can be trusted with a mission that the most powerful could never accomplish. Or a horse trainer can suddenly find himself delivering the mail mounted on a flying tarn.

The problem with fantasy fiction is just the same: anything can happen. That means if the author doesn’t have a tight hold on the reins the story can run amuck, and quickly lose all connection with the real world. If you haven’t read much fantasy, you might think a world of dragons, gryphons, and flaming swords couldn’t possibly ring true. But the author has pulled it off. In The Seraph’s Path, Dyrk doesn’t understand the opposite sex, and he’s prone to dig himself deeper via ongoing procrastination, and then he can’t figure out how best to ask for forgiveness. There’s something very real about this made-up world.

I was also impressed with how patient the author is and I’ll give one example. In this world, the god Arren is served by seven Seraphs. Dyrk sends his prayers via those angelic servants because he thinks Arren is too holy to approach directly. If that strikes you as Roman Catholic-esque, I’d agree. But isn’t Dyrk our hero? So how can he, via his repeated prayers, be teaching us something so very wrong? Well, a few hundred pages in Dyrk has his first encounter with people who talk to Arren directly. And he doesn’t know what to think about that.  By the end of this book, the issue is still unresolved, but our hero has been given something to think about.

I can only think of one caution worth noting. At one point a key character faces sexual temptation, and while the passage is not lurid – there’s nothing here that would make grandma blush – it is sad and realistic enough that pre-teen readers might find it distressing.

Dykstra has engaged in some downright Tolkien-esque world-building, with not only exotic creatures and nations to discover, but layer upon layer of legend and history shaping the events. If you never made it through The Hobbit, or you haven’t read a fantasy book with a glossary in the back to help you keep track of the characters, then this might be too intense a read for you.

But if you want a whole new world to explore, and a story that’ll not only entertain but really get you thinking, you’re going to love The Seraph’s Path. I finished this nearly 500-page tome in 3 days, and the only downside to it was the cliff-hanger ending. So I was very happy to discover that the 700-page sequel, The Seraph’s Calling has just been released. I look forward to finding out what happens next!

You can buy both books at Amazon.com and Amazon.ca.

Why and how the Nicene Creed came to be

The word “orthodoxy” comes from the Greek orthos which means right, true, or straight, and doxa which is praise, or opinion. Therefore, orthodoxy ...