Archer fish: a wonder of creation

This article is the first chapter from Dr. Jerry Bergman’s new book “Wonderful and Bizarre Life Forms in Creation” which you can order at Create.ab.ca.

The archer fish (Toxotes jaculatrix, from ejaculator fish) – named for its expert archery skills – is one of the most amazing fish known to humans.1 When first researched by scientists in the 1920s, researchers “could hardly believe their eyes” at its shooting ability.2 The existence of the fish was actually first reported by explorers as early as 1764, but for years scholars could not accept the reports of this amazing fish.3

This seven-inch long fish is well-known for accurately knocking insect prey out of overhanging vegetation with a jet of water six times more powerful than its muscles. To achieve this feat, the archer positions itself in the water with its snout just breaking the water’s surface, and its eyes just below the surface. Then it aims its jet spray using superbly designed binocular vision to accurately determine its prey’s location.

If one eye is damaged, their aiming skill is lost. Archer fish modulate their water jet’s velocity to create a single large water droplet that strikes their prey with enormous force. This design avoids the requirement for specially designed internal structures to store large amounts of energy.

HOW ITS WATER GUN WORKS

The water shot is produced by the fish compressing its hard-bony tongue against the roof of its mouth, forcing water out the gun-barrel-like groove in the archer fish’s mouth roof by rapidly snapping its gill covers shut.4 It accurately strikes its target usually on the first attempt at distances of up to 2 to 3 feet! To position itself to hit its target, the fish can swim up, down, and even backwards to enable its vision to line up with its prey.

So complex is its design, that the mechanism the archer fish uses to produce its water jet has been researched for decades. Only in 2011 were scientists finally able to understand how it works.5 Alberto Vailati and his University of Milan colleagues provided the first scientific explanation for how archer fish are able to generate such powerful jets to capture their prey. To study the mechanics of the water jet, the authors used high-speed video recordings of archer fish knocking insects out of plants.

Scientists now know that a large amplification of the fishes’ muscular power occurs outside of the fish to cause a powerful impact of the water jet against the prey. The archer fish generates this power externally using water dynamics rather than specialized internal organs. Some animals, such as chameleons and salamanders, store energy in their body’s collagen fibers and abruptly release their stored energy to project their tongues outward at high speeds. Previous research on archer fish has ruled out the use of these specialized organs as the source behind their powerful water jets.

Excellent vision in its typical muddy water environment is also critical to hit its target. To achieve this vision, the archer’s eye retina is far more complex than that of most fish. The cones for daytime vision number only 8 or 9, but the archers’ rods for vision in muddy water, where they normally live, number a whopping 217. The archer fish can extinguish cigarettes with their water jet in total darkness! The archer fish must also solve the refraction problem, the bending of light rays that occurs as the light rays enter the water, causing objects to appear where they are not. It achieves this feat with remarkable accuracy.6

These variables require computing a set of calculations that must be done by human mathematicians using calculus. Research has also determined that archer fish learn to make these calculations by observing other skilled fish practice their art. All of this is achieved by a “primitive cerebrum” which researchers have discovered is not primitive at all!9

Evolution cannot explain archer fish because evolution postulates that it gradually evolved its remarkable ability, and must have done so because it significantly helped their survival. No other fish has this ability. Nor are any intermediates between the archer fish and all other fish known. Fish either possess the complete set of biological systems to shoot insects out of the air, or lack the entire set.

Another major problem with an evolutionary explanation is that archer fish most often feed on insects it finds on, or just below, the water surface. It can even jump above the surface to take insects on the wing. It can also feed on insects that sink a few inches into the water.10 For this reason, it does not need to shoot insects out of the air to survive, and can survive quite well without ever doing so. In fact, most of its food is usually obtained without ever using its water gun. It appears its archery ability is exercised mostly for sport or variety! Archer fish expert, Professor Lüling, recognized this problem, writing:

Toxotes depends largely on food it finds on or below the [water’s] surface. It prefers insects that have fallen to the surface, but it will also take food that has sunk a few inches into the water. This raises an interesting question for evolutionary theory: Spouting, if it is so unimportant, can hardly have been a significant factor in the survival of the species or in selection and differentiation within the species.11

Consequently, natural section cannot account for their amazing ability. Nor can evolution account for the unique ability of this marvelous little fish! Although normally existing in the waters of Australia and Southeast Asia, because of their unusual skill they are popular attractions in aquariums throughout the world. 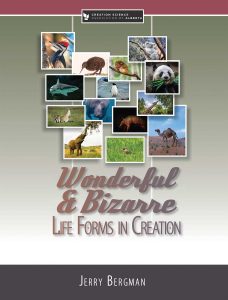 This is Chapter 1 from Dr. Jerry Bergman’s “Wonderful and Bizarre Life Forms in Creation” Each of the 23 chapters examines a different animal or creature, so if you liked this, you can order the book at Create.ab.ca.