After Evolution: 4 Reformed figures who accepted evolution and kept on moving

What follows are very brief bios of four prominent Reformed figures who have accepted evolution and gone on to accept increasingly unorthodox positions.

Enns once taught at Westminster Theological Seminary (1994- 2008) from where the Orthodox Presbyterian Church (OPC) gets many of their ministerial candidates. After accepting evolution, he now has a very different understanding of the Bible, claiming, “God never told the Israelites to kill the Canaanites. The Israelites believed that God told them to kill the Canaanites.” He’s also promoted homosexuality on his blog, and noted that embracing evolution and homosexuality both require the same sort of “disassembling” of how we once read the Bible. 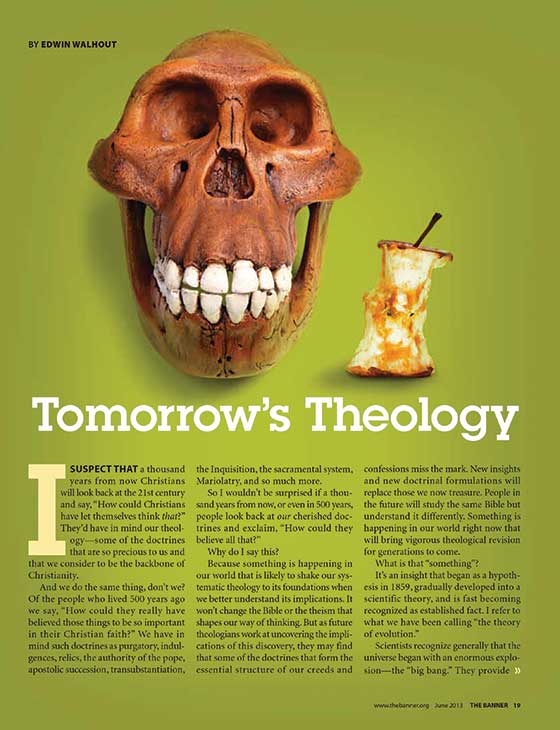 Van Till taught at the Christian Reformed Calvin College (1967-1998) and was for a time one of the best-known Reformed defenders of evolution.

He no longer holds to the Reformed confessions and, according to a 2008 piece in The Grand Rapids Press, seems to have migrated to some form of pantheism, seeing “God not as a transcendent, separate creator, but an active presence within and inseparable from creation.”

Walhout is a retired Christian Reformed Church (CRC) pastor, and was once the denomination’s Editor of Adult Education. In 1972 he suggested:

…it may well be that science can give us insights into the way in which God created man, but it can hardly discover or disclaim that man is an image of God.

In a 2013 Banner article “Tomorrow’s Theology,” he was far more definitive, proposing that in light of evolution, the CRC needs to re-examine the doctrines of Creation, Original Sin, the Fall and Salvation, as well as whether Adam and Eve were real historical people.

Haarsma was a professor at Calvin College from 1999 until 2012. In 2007, along with her husband, she authored a book that discussed various views on origins and, while endorsing none, treated evolution as at least credible.

She is now the president of Biologos, a think tank that aggressively promotes evolution as true and that questions Original Sin, the Flood, the Fall into Sin, and whether Adam and Eve were actual historical people.

Moving in just one direction?

Does this mean that accepting evolution always leads to liberalism? Couldn’t we counter this list by coming up with one made up of Reformed luminaries who have accepted evolution and stayed generally orthodox?

We could come up with such a list and maybe we’d place the still unborn-defending, homosexuality-opposing Tim Keller on it. But how many others can we think of? And the problem is that a few decades ago Peter Enns might also have been on such a list. He didn’t reject orthodoxy immediately. Any such “counterlist” might simply be a list of evolution-believing Reformed figures who don’t reject orthodoxy yet. Only time will tell.

No, if we’re going to try to make the case that evolution and orthodoxy are a natural fit, then the better counterlist would be that of liberals who, after embracing evolution, moved in a more orthodox direction. That would be a good answer to this list.

But does that ever happen?

A Dutch version of this article can be found here. This article first appeared in the April 2016 issue.

We confuse ourselves focusing only on the here and now ****  What in the world is a hermeneutic? You might be familiar with the term if you took...

The secret thoughts of an unlikely convert

WHAT’S INSIDE: The winners of our "What needs Reforming today?" contest / Red, White, and Blue: are there greener pastures south of the border? / Ke...