The current Marriage debate has many people worrying about the institution’s survival. In Canada and the US, the battle has been fought, and seemingly lost. Now it moves to Australia, where a plebiscite – non-binding, but it has everyone talking – is happening in September.

Oh, we might have signed petitions, and cast our ballot, and even encouraged others to vote the proper way, but in all that, many Christians have done so without battling as Christians. Too often we’ve relied on “neutral” non-religious arguments.

And the problem with neutral arguments is that they have no foundation – they don’t hold up under scrutiny. 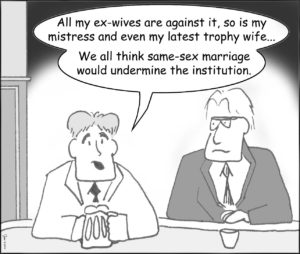 So, for example, you may have heard it argued (and perhaps you’ve used this yourself):

Traditional Marriage is, well, traditional – it’s been this way for thousands of years, so why change it now?

The problem is, slavery was also in vogue for millennia too. Does that mean it was right? Of course not. So tradition for tradition’s sake isn’t much of an argument.

This argument may well be legitimate, but the next time a divorced politician brings up this point he should be arrested by the hypocrisy police. Will “same-sex marriage” ever undermine the institution as much as no-fault divorce already has?

Gay marriage is not natural.

There is a sense in which this is most certainly true. In gay marriage the parts do not fit or function as they should. We are not designed for this sort of thing.

And yet, they said that about human flight too – “unnatural” is hardly the same thing as “bad.” And besides, if we look to Nature, homosexuality is found among many animal species – it is “natural.” Christians should know better than to base any arguments for morality on what we see happening in our sin-stained world. We know that since the Fall, it is now in Man’s nature to sin – sin is natural. After the Fall, Nature was also stained and twisted, so we shouldn’t be surprised to find that brokenness evident there too.

Most Australians are against changing Marriage.

We’ll see once the results are in. But even if the vote goes our way, we know better than to believe that just because most people think a certain way that way is right. As our mothers used to say, “If all the other boys jumped off a bridge, would you too?” Instead of focusing on what’s popular, we should try and figure out what’s right. 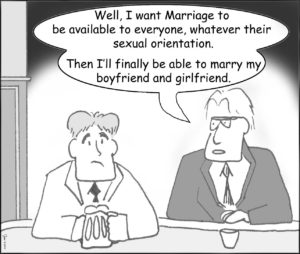 There is really only one good argument for Traditional Marriage: God created this institution so He gets to decide what it is, and isn’t.

That argument may not be very appealing to atheists and agnostics. But the alternative is probably even more unappealing because the truth is if you reject God’s standard for Marriage you’re left with no standard at all.

Some find God’s definition of Marriage too intolerant, so they want to replace it with something a little less discriminatory.

But where does this new standard – that discrimination is always wrong – take us? Yes, gays will be allowed to “marry” but this new standard justifies much more. After all, if two men can marry, why not three?

What about the bisexual? We discriminate against her, on the basis of her sexual orientation, when we require her to marry only one gender or the other. How can she live a fulfilled life in such a restricted setting?

And what of homosexual couples who want to have children? These couples, by necessity, require a third individual to propagate. For example, it’s been more than ten years now since a New York lesbian, Beth Niernberg, decided to live with two gay men who have both fathered a son by her. The three co-parented the boys.

We’ve entered the realm of polygamy and really, it only makes sense. If you reject God’s limits to Marriage then there’s really no reason to have limits at all. After all, if two men can marry, why not three?

Or why not one? In the Netherlands Jennifer Hoes was one of the first to end her wait for the perfect man or woman and instead “marry” herself. There is even a name for this: sologamy.

And in France, the government decided that they would grant marital benefits to two heterosexual men who “marry.” After all, it really isn’t fair to discriminate against them just because they aren’t having sex.

If God’s standard for Marriage is rejected then absolutely anything is possible.

The way it was meant to be

The only anchor, the only firm foundation for Marriage is found in God’s design for the institution. His institution recognizes that men and women need each other, and that being male and female has real meaning beyond just our body parts. He knows that children need a mother and a father, parents who are committed to one another for life, so He hates divorce and adultery.

Over the past decades we’ve seen the damage that happens when we deviate from His standard. That’s where, if we speak as Christians, we can offer our nation a prophetic voice. We can tell them that in this direction lies only further lawlessness. But we can also tell them about the God who thought up marriage in the first place. We can tell them about how his love is evident in his commandments – He made us, so He knows what’s best for us – and that’s why we see children in stable loving families, with parents living out their marriages as God intended, do better than in any other setting. Then, in standing as Christians against “gay marriage” and for Traditional Marriage, we can point people to the God they need to know.