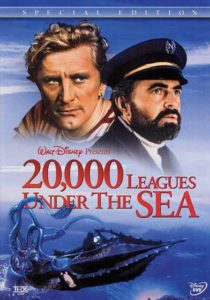 20,000 Leagues Under The Sea is a childhood favorite that I’ve been looking forward to sharing with my own kids. However, it’s been so long since I’d watched it, I wasn’t sure it would live up to expectations. I am happy to say it did!

The year is 1868, and it is a time of both sail and steam on the high seas. When rumors of a gigantic sea creature stop ships from venturing out onto the Pacific, the US government asks if oceans expert Professor Pierre M. Aronnax and his assistant Conseil will join a Navy expedition. The goal is to either disprove the creature’s existence or, if they find it is real, kill it. To that end, harpooner Ned Land (Kirk Douglas) is also invited along for the expedition.

However, Ned’s harpoons are no use against the creature’s hide because it is not flesh and bone but is, instead, made of iron and steel! What’s been destroying the ships turns out to be a submarine. When the sub destroys the Navy’s ship, only these three – the professor, Conseil, and Ned – survive. They end up being taken on board.

So who created this sub, and why is it being used to destroy ships all over the Pacific Ocean? I won’t give it away but as you might imagine, the submarine’s Captain turns out to be more than a little disturbed.

While there are some fantastic action scenes in the film – including a prolonged fight with a giant squid – even my timid 6-year-old managed to make it through them…though we did turn down the sound at that point, to help her out.

So the only caution I’ll share is in regards to the good guys’ morality – the three shipwreck survivors don’t agree on much, including what they think about the psychotic captain holding them captive. For any kid used to films where the good guys wear white, and where right and wrong are very easy to distinguish, this will be something quite different. Mom and dad should hit the pause button now and again to discuss how everyone is acting, and how that lines up with how God might want them to act.

Our whole family enjoyed this. It has action, but also some calm and wonderful underwater scenes where we get a peek at what it would be like to live always under the seas. I’d recommend it for ages 5 to 95, but I’ll add that this being an older film, the pacing is a little more patient than modern fare and, for an audience new to the classics, that might take some getting used to

Still, it a classic for a reason – this definitely stands the test of time!

Sunday September 30 – The presence of the Holy Spirit

by Shaun Tan 2007 / 128 pages I am an immigrant of sorts, having moved across the border to the US, and while it was easy enough to adapt it did g...