When we look at nature, we can hardly miss the design that is everywhere so apparent in living creatures. We recognize it every time we see aspects of an organism that are elegant, beautiful and useful. There are many famous examples of design in nature, traits that are not only beautiful, but which work beautifully as well….but one can look anywhere! Some examples are more interesting to us than others, but all are worth considering.

Consider for example the difficulties that the largest animals on earth, the rorqual whales must overcome to obtain enough food. The blue whale is the most famous and largest example of a rorqual. Another is the humpback. Such big animals are not going to be good at chasing smaller more agile prey. Their solution is to find very thick schools of small fish, and then to lunge forward and gulp in a huge mouthful of water containing lots of fish.

The whales engulf the water and fish before the latter have a chance to panic and escape. The whales then push the water back out of their mouths through a special filtering system like Venetian blinds, which in this case is called baleen. What is left in the mouth, the whale swallows.

It all sounds relatively uncomplicated, but it is not. Without a number of special and unique design features, these whales would starve. 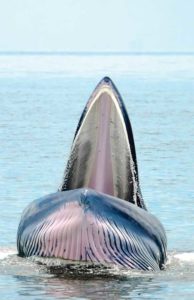 The rorqual whales are named for their specially pleated throats (extending from mouth to navel) which can expand tremendously to accommodate 60 – 80 cubic meters of water and prey, “a volume equal to or greater than that of the individual rorqual itself” (Pyenson et al. Nature, 2012 p. 498, emphasis mine).

The prey must now be separated out from all that water. What the whale does is push the water out of its mouth through a sieve-like structure which replaces teeth. This filtering system or baleen, consists of keratin, like our fingernails and hair.

The baleen whale’s “suspension feeding system” – which involved feeding on, and straining out, suspended food particles from water – is unique among mammals and the pleated throat of the rorquals is unique to this even smaller group of baleen whales. That is not the end of the story. Without further special design features these whales would still be “dead in the water.”

No group other than the rorqual whales engulfs a massive volume of water in a single gulp. In order to do this, the animal lunges forward, accelerating to high speed, and then gulping in that huge volume of water, all within six seconds. But how does the whale know what volume of water to engulf? And how does it manage to engulf a volume larger than its own body? How does it know what water to gulp? If the whale just went around gulping random volumes of water, it would certainly starve – schools of fish are patchy in their distribution, and thus cannot be found in any old place.

3. The hair of their chinny chin

For a start, the whale has bristles on its chin which function sort of like whiskers. These allow the animal to identify schools of fish that are sufficiently dense. Now the whale must take advantage of this dense concentration of fish. To do this, the rorqaul must control the rate of mouth opening and throat-pouch expansion so as to maximize the intake volume. All this must happen while the whale is lunging forward at high speed.

4. Jaw that splits down the middle

We now discover more unique design features of the rorquals. The lower jaw consists of left and right halves which are only loosely connected by fibres, and also are only loosely connected to the skull. This allows for great flexibility of the mouth opening. As the rorquals lunge forward, they rotate the components of the jaw so that the opening is close to 90 degrees at the peak of the lunge. The tongue becomes convex and the throat pleats expand. Soon the jaws clamp around a huge volume of water and the whale begins the process of expelling the water and retaining the fishy harvest.

New research has shown that the rorquals enjoy the benefits of yet another design feature which enables them to be successful in this unusual lifestyle. In the centre of the lower jaw (between the two loosely connected halves) is a special and completely unique sensory organ. In its basic design it is something like the semicircular canals in our inner ear which allow us to figure out the orientation of our bodies. Inside the canals in our ears, there is clear gel and particles which occupy one position or another.

Similarly, in the jaws of these whales there is a structure which has papillae (soft projections) surrounded by a gel-like matrix. This seems much like the mechanoreceptors in our inner ears. Apparently, this organ in the whale jaw informs the animal as to the extent of the rotation of the jaws and the expansion of the pleats during mouth opening. The rorquals alone possess this organ between the unfused halves of the lower jaw.

Scientists consider that this sensory organ plays a fundamental role in the extreme feeding method of these largest animals on earth.

It is evident from details of the lifestyle of the rorquals that even apparently uncomplicated methods of feeding require special design features. The rorquals are certainly an example of irreducible complexity. Even with baleen instead of teeth, if they didn’t have the unique unfused lower jaw, pleats in the throat, the special sensory organ in the jaw, and the sensitive bristles on their chin, these largest of animals could never survive. Evolutionists have no adequate explanations for how these unique features could have developed through spontaneous processes.

This is an excerpt from Dr. Margaret Helder’s “No Christian Silence on Science” which you can buy here and which we review here.

by C. John Miller & Barbara Miller Juliani 182 pages / 1997 This is the true story of a prodigal that came back. Barbara Miller, seemingly ou...