Back in 1988 a Pew Research poll of Americans found that a majority thought they were doing quite well, describing themselves as “haves.” Just 17% said they were “have-nots.” 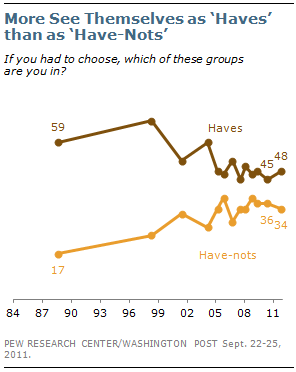 Twenty years later there was quite the change: a 2011 Pew poll found that self-identified have-nots had doubled to 34%. So, why this pessimistic turn in Americans’ self-assessment? Is it because things have gotten so much worse?

Well, no. Things have improved in big ways and little since 1988!

Consider, for example, how many Americans had cellphones in 1988. It was under 5% of the US populace. Today 95% of Americans have a cellphone, and more than 75% of them have a smartphone. In other words, three quarters of the population are walking around with a device in their back pocket that their 1988 forbearers couldn’t even have imagined, but if they did, they would have thought this music-playing, direction-giving, movie-showing, call-anywhere, super computer would have to be a tool reserved for only the super rich. And yet we all have one.

And when it comes to the basics, in 1988 necessities used to eat up 39% of the average American worker’s income. In 2013 that had fallen to just 32%, meaning more disposable income for most everyone.

So, again, why do more people feel like they are bad off when, in general, things are actually improving?

Well, maybe it has something to do with the growing popularity of the term “income inequality.” By one measure, this term is used almost twice as often as it was in 1988. And focusing our attention on how much more our neighbor has than us can make it hard to appreciate our own blessings (Prov. 14:30).

Why Reformed churches should be full of adopted children

Explaining why it's evil to our non-Christians friends ***** In recent weeks, I’ve come across what seems like a multitude of articles on the sub...