Dr. Kathy Koch has a saying that reflects the biblical thought Paul express in 1 Cor.15:33. She notes, “Show me your friends, and I will show you your future.”

ALL MARRIAGES ARE MISTAKES

“Only a very wise man at the end of his life could make a sound judgment concerning whom, amongst the total chances, he ought most profitably to have married! Nearly all marriages, even happy ones, are mistakes: in the sense that almost certainly (in a more perfect world, or even with a little more care in this very imperfect one) both partners might have found more suitable mates. But the ‘real soul-mate’ is the one you are actually married to.”
– JRR Tolkien, The Letters of JRR Tolkien (H/T to Nicholas McDonald) 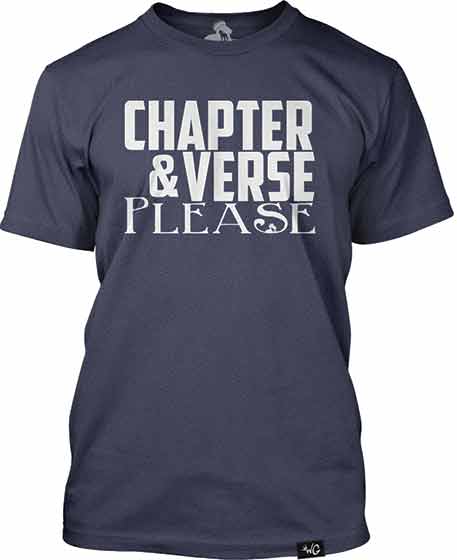 SOURCE: Modified from a joke floating around the Internet

The folks at WrathAndGrace.com have come up with a T-shirt that’s a challenge to fellow Christians. We have lots of beliefs, we have lots of opinions, lots of positions, but have we searched the Scriptures to find out if they match up with what God says?

WHY THE END DOESN’T JUSTIFY THE MEANS

“What have you and I to do with maintaining our influence and position at the expense of truth? It is never right to do a little wrong to obtain the greatest possible good… Your duty is to do the right: consequences are with God.”
– John MacArthur, as cited in Iain Murray’s John MacArthur

SATIRE’S KING KNEW A GOOD JOKE WHEN HE MET ONE

Jonathan Swift (1667-1745) showed generations how to do satire right and it seems his comic genius came from an ability to spot humor wherever it was to be found. A story is told of him trudging through a field, when he spotted a boy leaning lazily against a fence post. Swift asked the boy for direction to the nearby town to which the boy’s only reply was to shift his boot slightly, pointing the way with his toe. Swift laughed, and offered the boy a shilling if he could manage anything any lazier than what he had just done. The boy replied, “Put the shilling in my pocket.”

SOURCE: Fintan O’Toole’s “The Genius of Creative Destruction” in the Dec. 19, 2013 edition of The New York Review

ON PRAISING EFFORT, NOT TALENT

Luke Gilkerson is best known for his expertise in helping parents protect their children from online dangers. But in his book Parenting the Internet Generation, he shows he’s got wisdom to share on all aspects of parenting.

Resist the urge to praise your children in a way that labels them. Statements like “You’re so smart,” “You’re so kind,” “You’re my little Picasso” do our children very little good. Research shows when we praise children like this, labeling them as “smart” or “good,” this does not give them confidence. Instead they become highly sensitive to failure. Rather focus on praising the effort they put forth. If they show kindness to their sibling, tell them you’re glad they are working on paying attention to the needs of others. If they get an A on an exam, instead of telling they must be the smartest kid in class, ask them how they studied for the test and commend them for their work. Instead of giving our children an identity as “good” or “smart,” commend them for using their God-given talents and energy wisely.

How’s this for a great illustration for the transgender debate?

Abraham Lincoln once told the story of a boy who was asked, how many legs would a calf have if we called its tail a leg. The boy replied, that it must be five. But he was corrected, because, after all, simply calling a tail a leg, doesn’t make it a leg.

So it would seem that Lincoln understood that no matter what words we might use, words can’t change the nature of a thing – a rose by any other name would smell just as sweet, and a man by any other name is still what he always was.

But here’s the problem – he told this story in the context of considering whether he could, simply by Executive Order, free the slaves in the South. It seems, people wanted him to, and his response was, in effect “Guys, Executive Orders don’t have that power, and you can’t just make them have that power by saying that they do.”

And then, shortly afterward, we all know what happened. He issued an Executive Order called the Emancipation Proclamation that freed the slaves. And it worked…eventually (first, they actually had to conquer the South).

So this is one of those great illustrations that, on closer examination, serves to make almost the opposite point. It seems you can change the nature of some things just by saying so – if you just declare an Executive Order can free slaves (and enough people agree) then it can.

So does that mean men can become women? Nope. It just shows that some things are changeable. Just as Lincoln’s Proclamation did actually free the slaves just because he declared the Order to have that power, so too I can (sometimes) change a dour mood by declaring my happiness with as much gusto as I can muster. I’ve become happy just because I’ve said it is should be so.

This clarifies one point in the gender debate – we were never trying to say that all things are fixed and unchangeable. We were only arguing that gender is not one of those changeable things. And roses too. Roses are still roses, and smell just as sweet, even if you call them limburger cheese.

Of course, Lincoln’s quip about the 5-legged calf does still highlight that some things are fixed. But there are no shortage of good illustrations for that point. So this one is best left tucked away in the history books.

The Hobgoblins: a novel on John Bunyan

by Douglas Bond 2020 / 268 pages There are people who carry out such heinous acts and live such immoral lives that we’d think, surely they could...

Poppy & Sam and the mole mystery

by Cathon 2019 / 42 pages A little girl Poppy and her talking panda friend Sam are either very tiny, or they live in a land of giant people-sized ...

Documentary 95 min /  2008 Rating: 8/10 Comedian Ben Stein (who once also wrote speeches for Richard Nixon) is our guide in this film that dares...