Brett Miller is a cartoonist for the website Creation-Evolution Headlines (CrEv.info). While his other cartooning efforts are great, this one below, titled “Leap of Faith,” (which he’s graciously shared with us) is my favorite. He’s packed so much in here, with the rainbow made up of key explanations that evolution is missing, and directly underneath all the “weasel words” that evolutionary accounts so often employ. And then, further down, a reference to how evolutionary accounts resemble a particular type of fiction: Just-So Stories.

In 1902 Rudyard Kipling published his book Just So Stories with short chapters on topics like: how the elephant got its trunk, how the leopard got its spots, how the camel got its hump, and how this animal and that got their peculiar features. While evolutionists wouldn’t appreciate the comparison, often times their evolutionary explanations bear more than a passing resemblance to Just So Stories. Kipling tells us that the elephant got its long trunk because a crocodile stretched it. Evolutionists tell us that giraffes got their long neck because long necks help them reach high enough to get the leaves on the highest branches. Is one idea more scientific than the other? Were either observed or can either be proven by repeatable experimentation? No, no, and no. Both make for interesting stories…and that’s all they are. So keep Miller’s comic in mind the next time you hear a report about some new evolutionary discovery, and ask whether evidence is being offered, or simply a clever story. 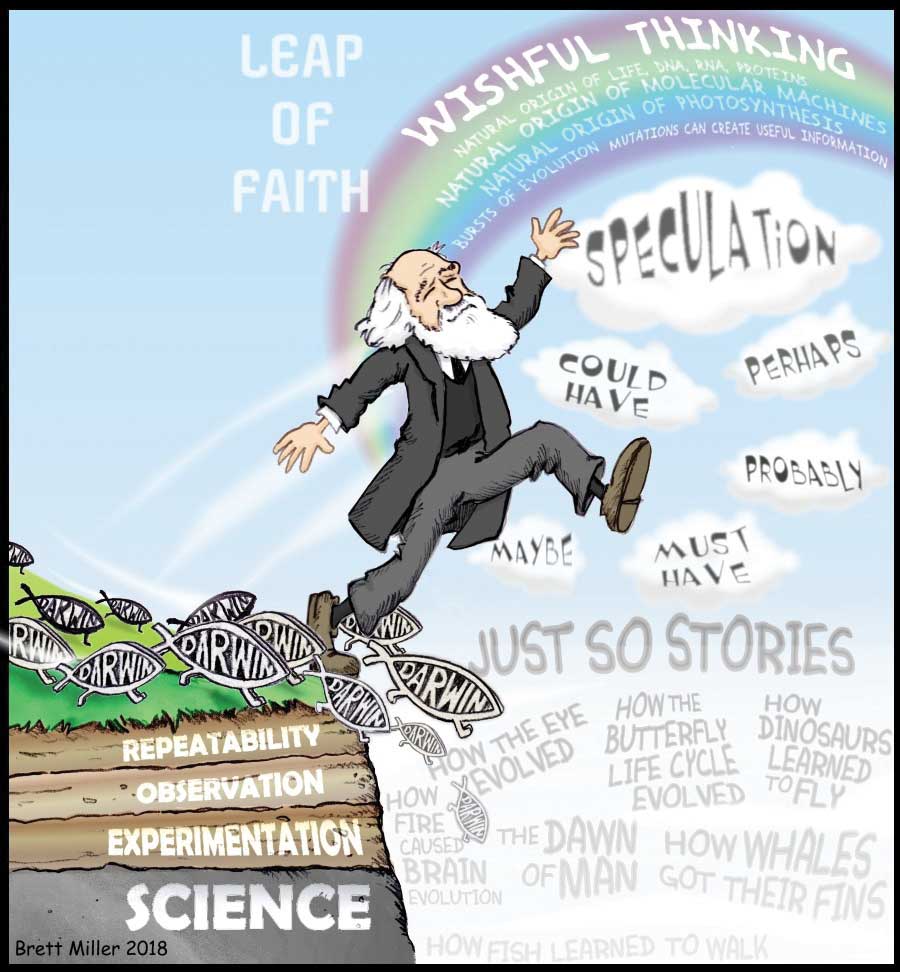 Factoids about your favorite Christmas songs

Red and yellow, black and white…

Creationist Ken Ham has a solution to the problem of racism. All we have to do is make people understand their true origins:

“[The Bible] says all people are descendants of one man and one woman, Adam and Eve. That means there’s only one race of people… I remember after talking on this once a man told me, ‘When I filled out my census form and it said, “What race are you?” I wrote down “Adam’s.”’”

SOURCE: “Genesis: The Key to Reclaiming the Culture” DVD

For sale, cheap: New Kids on the Block collection

In a speech some years ago in British Columbia, Pastor Douglas Wilson laid out a way of evaluating music. He compared different types of music to different types of plates. Some music, he said, is like your grandmother’s fine china: it takes some effort to use, but it will last for generations. This is classical music like Bach or Beethoven.

Other music is more like CorningWare – it isn’t quite as refined but might be more popular and it can be passed on from one generation to the next. Wilson thought this was like folk music.

Finally, one type of music is more like paper plates. It is designed to be used and thrown away. We consume it, it doesn’t take a lot of effort to use, and we don’t hand it on. Into this category Wilson slotted pop music.

So one of the easiest questions to ask when evaluating music is whether you’d pass it on to your kids. And if, in five or ten years, you’ll be embarrassed to own up to owning it, why are you listening to it now?

The wit and wisdom of Winston Churchill

Churchill had a way with words, inspiring his island nation in their darkest hours with just the right turn of a phrase. His most famous speech was given on June 4, 1940, after the British had been forced to flee the mainland. This was a massive defeat, but an even bigger miracle. More than 300,000 Allied troops were able to evade what seemed certain capture when, with the help of hundreds of private watercraft owned and operated by British citizens, they were able to retreat across the Channel to England. It was then that Churchill rallied his nation promising that should the Nazis come:

And that’s far from the only memorable sound-bite the man uttered. Here’s ten of his very best quotes:

When did Moses enter the Promised Land? Ah, you say, but that trick question isn’t all that tricky: everyone knows Moses never entered the Promised Land. God told him to speak to the rock at Meribah (Numbers 20) and water would come out, but instead Moses struck the rock twice, and for this disobedience God told Moses he would not lead Israel across the Jordan. He showed Moses the Promised Land from high atop Mount Nebo (Deut. 34:4-5) and then Moses died, never stepping a foot in it.

But while it is true Moses died before entering, it turns out he probably did still visit the Promised Land. In Matthew 17 we read that Peter, James, and John went up with Jesus to the top of a high mountain where Jesus was then transfigured, “his face shone like the sun,” and his garments became “as white as light.” And then two people appeared next to Jesus and began talking with him: Elijah and Moses! So how’s that for a fun trick answer?

But as trick questions go, the answer to this one isn’t as clear as we might like, because it’s not certain that this mountain (which isn’t named in the Scriptures) was actually in the Promised Land. Two hypothesized locations (and there are others) are Mount Tabor, which is within the boundaries, and Mount Hermon, which is not.

So, maybe the better trick question is, when might Moses have entered the Promised Land?

On breaking your TV habit Want to cut down on your TV watching but find it a battle? Gary North has an idea he put in place more than 40 years ago: “Put a price on your time.” He suggests putting a piggy bank next to your couch and whenever you watch a show you have to put in $1 for a half-hour show, and $2 for an hour show. If someone else is already watching something (and has already paid the price) you can join in for free (TV watching together is a step up from watching by yourself). Then at year’s end you count up all the money and send a check for that amount to your favorite charity. “In short, put a price on your time. Pay the price. Economics teaches: ‘When the price rises, less is demanded.’ You will cut your TV habit by 50%. If not, make it $3.” SOURCE: Gary North’s Tip of the Week, January 3, 2015 Luther and Aristotle on the need for balance and moderation I’ve read that in Martin Luther’s first year at Wittenberg he had to regularly lecture on Aristotle’s Nicomachean Ethics. And while Luther didn’t seem a fan of the Greek philosopher, one of Luther’s more famous quotes is an echo of sorts to a passage in Ethics. Martin Luther once said: “Human nature is like a drunk peasant. Lift him into the saddle on one side, over he topples on the other side.” Long before, Aristotle spoke of the need for balance, and that there are two equal and opposite ways of getting things wrong: “….the man who flies from and fears everything and does not stand his ground against anything becomes a coward, and the man who fears nothing at all but goes to meet every danger becomes rash; and similarly the man who indulges in every pleasure and abstains from none becomes self- indulgent, while the man who shuns every pleasure, as boors do, becomes in a way insensible; temperance and courage, then, are destroyed by excess and defect, and preserved by the mean.” Of course, that a Greek philosopher said something doesn’t mean it is biblical. So is the need for balance a biblical idea? It can indeed be, and alcohol is an example. On the one hand God forbids drunkenness, but on the other, doesn’t require us to completely abstain – instead He calls for moderation. Another example might be sexuality and dress. On the one hand, we are called to modesty so lascivious or scandalous dress is forbidden, but we don’t all have to go around wearing burkas. There is a balance point between perverse and prudish. The key then is to act as God commands us, and not simply react against one way the Devil is trying to lure us. Reagan on Big Government “Government is like a baby. An alimentary canal with a big appetite at one end and no sense of responsibility at the other.” – Ronald Reagan as quoted in The Reagan Wit by Bill Adler Doubters should question their doubts too “Some believers spend too much time doubting their faith, and not enough time doubting their doubts. Yes, there are some reasonable questions that thoughtful people have always raised about the Christian faith. But there are also some very good questions that faithful people should raise about their spiritual doubts: Have I studied what God has to say on this question, or have I been listening mainly to his detractors? Am I well aware of how this doubt has been addressed in the history of Christian theology, or has my thinking been relatively superficial? Have I been compromising with sin in ways that make it harder for me to hear God’s voice and diminish my desire for the purity of his truth? Is this a doubt that I have offered sincerely to God in prayer, or am I waiting to see if God measures up to my standards before I ask for his help?” - Phil Ryken, in Loving Jesus More  Udderly marvelous Back in 2013 Vince Rozmiarek got put in charge of his small town’s community center message board, and soon after starting posting puns to the big 6” by 4” outdoor sign. Now the two puns he posts each week are seen by the many driving by, and by the 84,000 folks who have signed up for the Indian Hills Community Sign Facebook page. While his puns tackle all sorts of topics, he can’t “steer” clear of farm jokes. Cows have hooves because they lactose. If a cow doesn’t produce mill is it a milk dud or an udder failure? Ban pre-shredded cheese. Make America grate again. Cheerful cowboys make jolly ranchers Amish banks have cash cows The pregnant cow soon became decalfinated Award-winning cow. Outstanding in field. I called my horse mayo, and sometimes mayo neighs. Man assaults his neighbor with milk and cheese. How dairy?!? If pigs could fly, imagine how good their wings would taste. Only God’s Word makes sense of it all "I believe in Christianity as I believe that the sun has risen — not only because I see it, but because by it I see everything else." - C.S. Lewis, in Is Theology Poetry...

Great minds think alike, and this month two of those great minds belonged to a missionary in Brazil and an evangelist in California. The evangelist...