This was John Calvin

by Thea B. Van Halsema 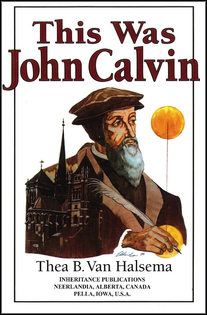 I’ve read four John Calvin biographies and this is by far my favorite. It is tightly written at only 224 pages, and interspersed with dozens of illustration, but what sets it apart are the many minor details the author includes.

One example: other biographies will mention that Martin Luther read and greatly respected what John Calvin wrote about the Lord’s Supper, but in This Was John Calvin we discover how Luther first learned Calvin’s thoughts. He picked up a Latin copy of Calvin’s Little Treatise On The Holy Supper Of Our Lord in a German bookstore. It’s only a small bit of additional detail but it is this sort of extra tidbit that makes history come alive – now I can picture the large Luther ducking through the small front door of a local bookstore, scanning the shelves of the Religion Section and plucking from the titles a slim volume by this young Calvin fellow he had heard so much about. That’s fun to imagine.

Another example: every Calvin biography will note that half of Geneva’s citizenship opposed the Reformer, many of whom were constantly scheming to get him expelled from the city. Van Halsema goes further, spending 3 chapters (out of the book’s 36) to tell the story of Geneva before Calvin’s arrival, and explain the historic reasons for the division in the city.

She also provides a helpful background to Calvin’s encounter with Michael Servetus – a heretic that Calvin is sometimes accused of murdering. Servetus was burnt at the stake by the Genevan authorities for denying the Trinity, and while Calvin agreed with his execution, Van Halsema notes that most everyone at that time did too. In fact the Roman Catholic town of Lyons had previously burnt Servetus in effigy, only substituting a dummy because the man himself had escaped their grasp.

To sum up, this is a great, readable biography that will be enjoyed by anyone in their late teens or older who has even the tiniest bit of interest in church history.

The Horse in the Gray Flannel Suit