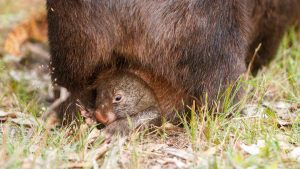 Back when I was a missionary in British Columbia, we had a friend visit from Australia. I asked him, “Have you ever seen a bear in the wild?” He hadn’t. “Would you like to see one?” He certainly did, but expressed his doubts whether I could just conjure up a wild bear for him. We drove for about 15 minutes north and arrived at the fish-counting weir on the Babine River. And sure enough, as always at that time of year, there were grizzly bears about, fishing for spawning salmon. Our Aussie friend was duly impressed.

Now if you were to visit our part of Australia today, I’d ask you, “Have you ever seen a wombat in the wild?” The wombat is as close as we get to a bear here in Tasmania. We’d have to drive a little bit, but there are some spots here where I can guarantee you’d see one — places like Maria Island, Cradle Mountain, or Narawntapu. And there are plenty of other places where, even if we didn’t see an actual wombat, we could definitely see evidence of them.

The main evidence you’d find would be their droppings. They’re rather distinctive. Wombat droppings are cubic, you see. Yep, they’re the only animals in the world that poop cubes. How does a wombat manage this feat? According to a recent study of wombat intestines, rather than being consistent like most animals, wombats have areas of varying thickness and stiffness. The droppings go through grooved tissues and irregular contractions and this produces cubes. Now not all wombat droppings are perfect cubes, but apparently the more cubic they are, the healthier the wombat. 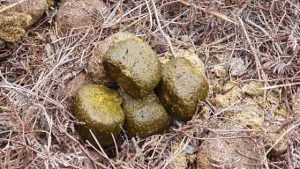 When most people think of marsupials, they think kangaroos. However, wombats are marsupials too. The wombat’s pouch faces backwards between its legs. So you could very well see a momma wombat wandering away with a baby wombat peeking out from the pouch.

Wombats are also renowned road kill in Tasmania and elsewhere. Adult wombats can be a meter long and weigh in at 35 kg or 77 lbs. They are like little bears. If you hit one with your vehicle, you’re going to feel it and it’s going to do some damage. This is because a wombat is not only large and heavy, but also built tough. Wombats may look soft and cuddly, but they’ve been designed like a tank. It’s especially their backsides that present a formidable wall – they have four fused bony plates. They use their backsides for defense and mating. When they’re in their burrows and an animal threatens to invade, they’ll just stick their bony butts out. They’ve been known to crush their enemies with their ample derrieres. Male and female wombats bite each other in their solid back ends as part of their mating rituals – and are none the worse for it.

God has certainly put fascinating creatures on this earth. Wombats are among them, animals that illustrate our Maker’s creative genius. Here we have an animal that looks a little bear, but could hardly be more different than a bear. I can’t help but exclaim with the psalmist, “O LORD, how manifold your works! In wisdom have you made them all; the earth is full of your creatures” (Psalm 104:24).

Dr. Bredenhof blogs at CreationWithoutCompromise.com where this first appeared, and it is reprinted here with permission.

Out of the depths

An Unforgettable WWII Story of Survival, Courage, and the Sinking of the USS Indianapolis 208 pages / 2016 by Edgar Harrel, USMC In 1944 Edgar Ha...

Mormons and Masons have their secrets. We don’t.

On mandatory vaccines and “My body, my choice”