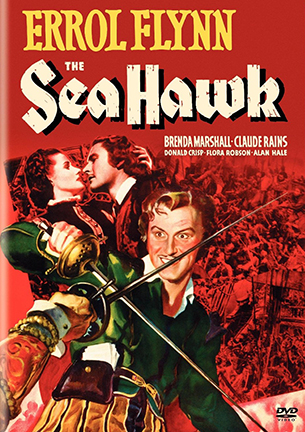 While The Seahawk is set in 1585, and pitches Spain against England, this film was all about the politics of its day. Spain is clearly a stand-in for the Germany of 1940, and King Phillip could only have been more Hitler-esque if they had given him the small patch mustache.

The story begins with Phillip laying out his plans for world domination. He demands from England that they refrain from building a fleet and offers his friendship, if they give in to his demands. Queen Elizabeth does her very best Chamberlain imitation, refusing to prepare for the clearly hostile Spain. She chooses to appease the tyrant, even as Phillip is building an armada.

Then there is Captain Thorpe (Errol Flynn) with his own stand-in role. He has his own ship, which is part of an English privateer fleet, the Seahawks. Even as Elizabeth appeases Phillip, the Seahawks raid Spanish towns and sink Spanish ships. Thorpe is channeling at least a little Churchill, urging the queen – and through her, the nation of England – to prepare for war.

That makes this film fascinating on two very different levels. It is a fantastic swashbuckling film all on its own, and it is also a wonderful bit of anti-Nazi propaganda, intended to rally the nation to resist. Queen Elizabeth concludes the film with a speech that is a clear call for America to come join the war.

“When the ruthless ambitions of a man threaten to engulf the world, it becomes the solemn obligation of all free men to affirm that the earth belongs not to any one man, but to all men.”

There is a lot of fighting, with folks getting stabbed and shot. But there is no gore.

I had an opportunity to watch The Seahawk with a group of friends who, as a general rule, don’t watch black and white films. A few exchanges struck them as a bit corny – acting in the 1940s did sometimes take a melodramatic turn – but the swashbuckling action and the self-sacrificial hero, the Second World War subtext, well, it swept away all their resistance. They simply couldn’t help themselves: they had to love it!

Jon Dykstra also reviews movies at ReelConservative.com where some of these reviews first appeared.

In addition to the dozens of books Jerry Pinkney (1939-2021) has illustrated for others, he has also retold a number of tales from Aesop’s Fables, H...

F.R.E.E.D. – an acronym to help us defend and use our religious freedom