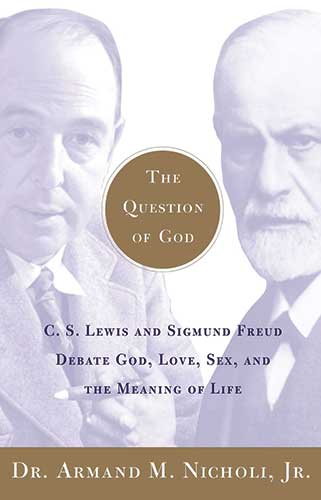 While C.S. Lewis was 40 years younger than Sigmund Freud, he was well acquainted with his ideas. Freud hated and feared God, and as a young man Lewis found Freud’s atheism attractive. But after his conversion, Lewis used his considerable skills to answer and rebut Freud’s arguments against God. What author Dr. Armand Nicholi has done is present a type of conversation between the two, with Freud usually presenting first, and Lewis them coming after to respond and correct.

So what do these two “talk” about? As the subtitle shares, C.S. Lewis and Sigmund Freud debate God, Love, Sex, and the Meaning of Life. The two also discuss whether morality exists and why there is suffering. And they take a close look at death.

It is a fascinating book, part conversation, but also part biography, giving us a good understanding of both men by sharing the similarities and differences in their histories.

The only caution I would note is that when it comes to the problem of pain both Lewis’s and the author’s Arminian leanings come out. For an interesting Reformed perspective, see Joe Rigney’s “Confronting the Problem(s) of Evil.”

But overall this is a very readable, very interesting account of two of the twentieth century’s pivotal figures and their ideas, which continue to impact us today.

A 40-page preview can be viewed here.

Is Cleanliness next to Godliness?

My goal is to have every room of my house neat and clean at the same time. But I do not believe that “cleanliness is next to godliness,” although ...

A mom reading Katy and the Big Snow to her daughters might remember her own parents reading the same book to her. Since they first came out in the 19...