The making of the Cornwall Alliance

How did we get our biblical stewardship group going?

Editor’s Note: Dr. E Calvin Beisner will be featured in Reformed Perspective’s Spring Speaking Tour “The Grass is Greener” so we wanted to share a little bit about him, and the organization, the Cornwall Alliance, that he heads.

Where did the Cornwall Alliance for the Stewardship of Creation come from? It is the ongoing result of decades of study by scores of scholars – theologians, scientists, economists, and others – and myself.

My own personal background played a major role in shaping it, so let me share that with you.

When I was an infant, my father, working for the U.S. State Department, was posted to Calcutta, India. We returned to the States around my second birthday, so I don’t have many direct, personal memories of life there. But two picture memories stand out starkly.

The first is of the beautiful tropical garden in the courtyard of the apartment complex where we lived.

The second is of the scores of bodies of those who had died of starvation and related diseases, over and around which, early each morning for several months, before trucks came around and picked them up, I walked, hand in hand with my “Aia,” the Indian lady who led me by the hand from my parents’ home several blocks to the home of an Indian family where I spent the day because my mother was paralyzed by a tropical virus that attacked her spine (from which, thank God, she eventually recovered).

Over the years, those two memories came to bespeak for me two things: the glories of God’s creation, and the horrors of abject poverty.

The Bible speaks about the poor too

Three years after I finished college with a B.A. in Interdisciplinary Studies in Religion and Philosophy with double minors in Classical History and Classical Languages (in 1978), a pastor friend urged me to read a book about Christian responsibility to care for the poor. I did, and I realized for the first time how much the Bible has to say about the poor. However, I suspected that much of what the author said was mistaken – that he misinterpreted Bible passages, used faulty theological reasoning, and often argued invalidly (as a philosophy student I had studied logic). I didn’t know much about economics, but I suspected that he misunderstood that, too. Yet his book was tremendously influential, so I decided to learn economics to better evaluate the book. I read a lot of textbooks and other studies of economics. Then I earned my M.A. in Society with Specialization in Economic Ethics (International College, 1983) with a thesis focusing on economic ethics.

The beginnings of a group

Meanwhile, a theologian friend who knew of my prior work in evangelism and apologetics had started the “Coalition on Revival” to help what eventually became several hundred Christian theologians, philosophers, historians, lawyers, educators, psychologists, economists, and other scholars to work together producing “white papers” setting forth the Christian worldview as it applied to each of the major spheres of life.

Knowing of my studies in economics, he asked me to chair the economics committee, and I consented. Dr. Marvin Olasky and Dr. Herb Schlossberg, along with about 20 others, were on that committee, and after the third year of our meetings, they asked me to write a book on economics for a series they were editing, and Prosperity and Poverty: The Compassionate Use of Resources in a World of Scarcity (1988) was the result.

One chapter was supposed to discuss how population, resources, and the economy interrelate, but as I worked on it, I found that it was far too much to treat in a single chapter. Marvin told me, “Okay, then do a whole book on that.” After two more years, I finished Prospects for Growth: A Biblical View of Population, Resources, and the Future (1990).

When people in the administration and board of trustees of Covenant College read those books (and others I’d written), they invited me to teach. I did, from 1992–2000, as Associate Professor of Interdisciplinary Studies, focusing on the application of Biblical worldview, theology, and ethics to economics, government, and public policy, with special attention to economic development for the poor and environmental stewardship.

In late 1999 the trustees and administration of Knox Theological Seminary invited me to teach. As Associate Professor of Historical Theology and Social Ethics (the latter including the ethics of economic development and environmental stewardship) I taught there from 2000–2008. (While teaching at Covenant and Knox, I also earned a Ph.D. in Scottish History (University of St. Andrews, Scotland, 2005–2003), focusing on the history of political philosophy.)

Starting in the early 1990s, a variety of religious scholars – Jewish, Catholic, mainline Protestant, and evangelical Protestant – were studying how Biblical ethics should inform environmental stewardship. I was one among many who participated in small colloquia hosted by various groups – the Evangelical Environmental Network, the National Association of Evangelicals, the Ethics and Public Policy Center, the Acton Institute for Religion and Liberty, the Atlas Economic Research Foundation, and colleges and churches – to deliver papers and discuss ideas.

One such meeting, involving about 30 scholars, took place in the autumn of 1999 in West Cornwall, Connecticut. Following it, several of us thought it would be helpful to create a statement of fundamental principles, and I agreed to draft it. That became, after editing by several scholars, The Cornwall Declaration on Environmental Stewardship, which was released publicly in March of 2000, after it had been endorsed by several hundred prominent religious leaders, and which eventually was endorsed by over 1,500 religious leaders and thousands of lay people.

In the summer of 2005, a handful of those who had been instrumental in organizing the gathering that led to issuing the Cornwall Declaration asked me if I would write some articles, speak in various places, and coordinate the building of a network of scholars to promote the basic ideas of the Declaration. I agreed to do it on the side.

From that grew the Interfaith Stewardship Alliance (ISA), a loose-knit network of theologians, pastors, other ministry leaders, scientists, economists, other scholars, and policy experts, all donating their time, dedicated to applying Biblical worldview, theology, and ethics together with excellent science and economics to the interrelated challenges of economic development for the very poor and environmental stewardship. Our first major product was An Examination of the Scientific, Ethical, and Theological Implications of Climate Change Policy (November 2005).

Over the next two years, ISA functioned as a loose-knit network of people with mutual interests. It had no budget, almost no funding (just small amounts donated by a few individuals), no office, and no staff except myself on a small part-time stipend. But the quality of that first paper, and then of our second, A Call to Truth, Prudence, and Protection of the Poor: An Evangelical Response to Global Warming (July 2006), resulted in our scholars’ being asked to speak for a variety of organizations and in my being asked to give testimony as an expert witness before the U.S. Senate Environment and Public Works Committee (October 2006).

In 2007 we changed our name to The Cornwall Alliance for the Stewardship of Creation to make our connection to the Cornwall Declaration clear. To respond to rising demand for our teaching and writing, we incorporated The James Partnership, a 501(c)3 non-profit religious, educational, and charitable organization. (Two other organizations also operate under The James Partnership.

We were able to hire a part-time assistant, and then in 2008 I left Knox Theological Seminary to divide my time between the Cornwall Alliance and serving on the pastoral staff of a church I had helped plant.

We are supported by donations from private individuals and non-profit foundations, not by corporate gifts, and by donations of time and expertise by over 60 scholars in our network, such as the authors of hundreds of articles we’ve published in scores of venues; the speakers for our Resisting the Green Dragon video lecture series and documentary; the author of our book Resisting the Green Dragon: Dominion, Not Death; the scholars interviewed for our Where the Grass Is Greener: Biblical Stewardship vs. Climate Alarmism and other video documentaries; and the authors and reviewers of our major papers, including:

As of this writing (early 2017), with two full-time staff (our Director of Communications and me), one paid part-time staff member (our Director of Donor Relations), and two part-time volunteer staff members, the Cornwall Alliance remains largely a loose-knit network of theologians, pastors, other ministry leaders, scientists, economists, other scholars, and policy experts dedicated to applying Biblical worldview, theology, and ethics together with excellent science and economics to the twin tasks of environmental stewardship and economic development for the poor through writing, speaking, social media, and our websites www.CornwallAlliance.org and www.EarthRisingBlog.com.

E. Calvin Beisner will be touring Canada, as part of RP‘s “The Grass is Greener: biblical stewardship and an age of climate alarmism” speaking tour. Dates and location are below. Can you help us spread the word? Please like and share this post! 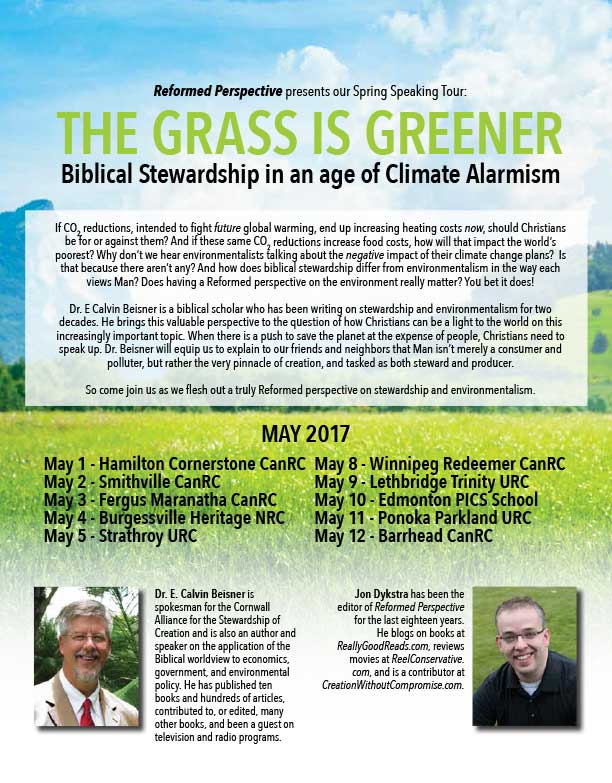 “Any fool can criticize, condemn and complain – and most fools do” – Dale Carnegie ***** In his bestseller How to Win Friends and Influence ...