Covenant Reformed Church of Grande Prairie, Alberta is prayerfully seeking a Full-Time Pastor to join us as we continue to be a faithful witness to th...

Trinity Reformed Church of Lethbridge, Alberta is prayerfully seeking a Full-Time Pastor of Congregational Life to serve alongside our Senior Past... 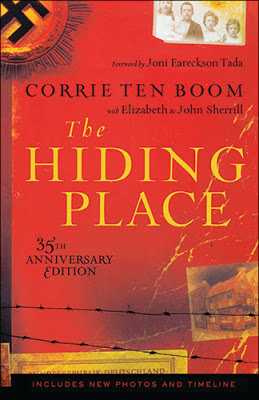 This was such an encouraging story, and in so many ways.

If you know only the barest details of Corrie ten Boom’s life story you might mistake her for a superwoman. After all, this is a lady who lost her father and sister to the Nazis, and who had to endure deprivation and cruelty of a German concentration camp and yet she still managed to forgive the very people who did her so much harm. That certainly doesn’t sound like any ordinary person!

However, while Corrie was most certainly a special woman, her biography is all about God’s greatness and not her own.

In the first third of the book she sets the scene, telling of her early life, and sharing the sage wisdom of her father. Once, when she was a little girl she overheard someone talk of “sex sin” so she went to her father and asked him, “Father what is sexsin?”

He turned to look at me, as he always did when answering a question, but to my surprise he said nothing. At last he stood up, lifted his traveling case from the rack over our heads, and set it up on the floor. “Will you carry it off the train, Corrie?” he said.

I stood up and tugged at it. It was crammed with the watches and spare parts he had purchased that morning. “It’s too heavy,” I said.

“Yes,” he said. “And it would be a pretty poor father who would ask his little girl to carry such a heavy load. It’s the same way, Corrie, with knowledge. Some knowledge is too heavy for children. When you are older and stronger you can bear it. For now you must trust me to carry it for you.”

And I was satisfied. More than satisfied– wonderfully at peace. There were answers to this and all my hard questions – for now I was content to leave them in my father’s keeping.

…POINTED HER TO HER HEAVENLY FATHER

Later she, still as a child, has her first encounter with death – a small baby in an apartment on her same block has passed away – and she can’t stop worrying about what she would do if her father and mother died. She can’t eat, and can’t stop crying. In response, her father points his little girl to her Heavenly Father.

Father sat down on the edge of the narrow bed. “Corrie,” he began gently, “when you and I go to Amsterdam – when do I give you your ticket?”

I sniffed a few times, considering this. “Why, just before we get on the train.”

“Exactly. And our wise Father in heaven knows when we’re going to need things, too. Don’t run out ahead of Him, Corrie. When the time comes that some of us will have to die, you will look into your heart and find the strength you need – just in time.”

And that is just what Corrie finds, when years later this ordinary woman, who led such a quiet life for her first 48 years, finds herself as the leader of a Resistance cell, hiding Jews and members of the underground, stealing ration cards from the Nazis, and providing whatever help she could to whoever came asking. And that is what she found still in the midst of the Nazi concentration camp, surrounded by cruel guards and biting fleas. God gave her just what she needed, just when she needed it.

This is a wonderful story that will be encouraging to anyone contending with discouragement, sickness, or the death of someone close to them. Miss ten Boom wants us to know that God never stops being good, even when we ourselves are wavering as things around us go so very badly. We can trust Him. We can count on Him. He loves his children!

I’d recommend it to anyone 16 and up and suggest it as a very good offering for any reading group – it would foster some wonderful discussions.

There is also a “young reader’s edition” which has been abridged to about half the length. But they accomplished this feat by taking out all the charm. The original reads just as you might expect an older Dutch lady to talk, but the abridged version has only a flat, generic narration to it – Corrie’s unique voice is gone. So give it a skip, and go with the original, even for “young readers.”

CD REVIEWS: Bach and Beethoven for kids (and adults)

The $15 minimum wage - good intentions are not enough

"…even as He chose us in Him before the foundation of the world, that we should be holy and blameless before Him. In love He predestined us for adop...

Uncle Tom: An Oral History of the American Black Conservative