The Faith of Christopher Hitchens 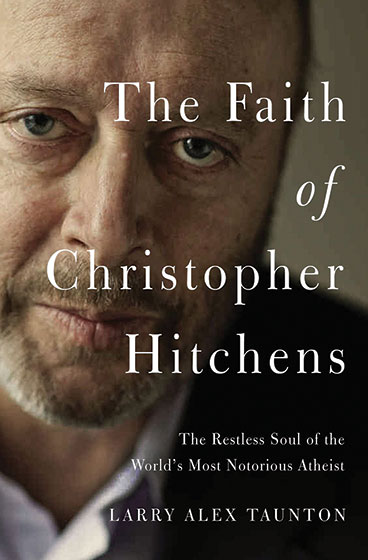 The late Christopher Hitchens is best known for his book god is not Great: How Religion Poisons Everything. He was an aggressive atheist who made his living blaspheming God. So why would we want to know more about him? And why would Christian author Larry Taunton want to write a book about him?

Because this book is much more about God’s graciousness than it is Hitchens’ rebellion.

And because Hitchens wasn’t quite what he seemed. Taunton writes of Hitchens having “two sets of books” just as fraudulent accountants do, with the one set for the viewing public, and the second private set that gives the true tally. Hitchens’ public face was that of the confident anti-theist who thought it made good theater to claim God was both unforgivably evil and non-existent. Meanwhile, the private Hitchens was spending more and more time with God’s followers, calling some of them friends, and even studying the Bible with one or two. If he wasn’t deliberately seeking God, this other Hitchens’ interest in the truth was bringing him closer and closer to his Creator.

The author, Taunton, got to know Hitchens after arranging public debates between Hitchens and prominent Christians. Often times after these debates the two public combatants, Taunton, and others, would head out to a late dinner where the debate would continue. This is how Taunton and Hitchens became friends. When Hitchens was diagnosed with terminal cancer the late-night debating seemed more important to them both.

God not only brought Christians into Hitchens’ life, He also gave this materialist a sure knowledge about the reality of evil. The atheistic/materialistic worldview has no room for right and wrong – things just are. We don’t speak of chemical reactions as having any sort of “moral quality,” and in the atheist worldview all we are is chemical reactions. So when atheists speak of evil they are speaking of something they have no explanation for. Hitchens seemed to understand this, but, particularly after the 9/11 terrorist attack, was also certain there was evil. Hitchens bravely denounced radical Islam, which lost him friends among the Left but more importantly exposed – seemingly to Hitchens himself – the big hole in his godless worldview. It was another nudge in a Godward direction.

While Taunton doesn’t make any claims about a deathbed conversion for one of the world’s most notorious atheists, he shows us that God was ever so gracious to Hitchens, teaching and confronting him repeatedly. We don’t know if Christopher Hitchens ever repented, but we do know God gave him every opportunity.

The only caution I’d note is that some of the Christians noted in the book – some who debated Hitchens and gave him something to think about – have some notable flaws in their theology, the most common being some sort of bow to theistic evolution. This isn’t much of a concern in this book but I share this only as an alert to any readers who might be spurred to look up the works of some of these mentioned men.

This is a close-up look at a wavering atheist that concludes without a clear happy ending – that makes it strange, particularly for a Christian-authored book. But the glimpse at what God was doing in Hitchens’ life makes this a compelling book. God gave Hitchens time, allotting him 16 months after his initial terminal cancer diagnosis; He brought him into close company with men who were able to answer his objections, and He also made Hitchens aware of evil. Why read The Faith of Christopher Hitchens? Because one can’t help but be struck by God’s graciousness in the life of Hitchens.

The limits of the “two-books” metaphor

There is an idea, common among Christians, that God has revealed Himself to us via “two books”: Scripture and the book of Nature. The Belgic Confe...

by Marie McSwigan 1942 / 196 pages In 1940, shortly after the Germans invaded Norway, a Norwegian freighter arrived in the US city of Baltimore ca...

When you are sad by Jocelyn Flenders edited by Edward T. Welch 32 pages / 2019 This book is part of an excellent series put out by the Christian...