Bill, and The Brothers Karamazov, on the Problem of Evil

“All right, so this passage shows Jesus’ lordship and control over all creation.”

Bill glanced at his watch. It was already 3:45 and his class started at 4:00. It was at least a 10-minute walk across the campus. “Are there any questions?” Bill hoped that the passage was clear enough to Victor, the only visitor at the Bible study. The group of four sat in silence staring at their Bibles briefly.

Then Peter spoke up, “Well, there aren’t any questions, I guess we can close in prayer. Steve, could you close with us?” During the prayer, Bill felt his stomach tighten. The next two hours were going to be rough. As Steve finished, Bill added a few extra words asking God to strengthen him for what was coming.

“Well, I’d love to stick around and talk, but I really gotta get going. My class starts in 10 minutes. See ya!” Bill walked briskly into the cold October air. The darkening dusk added to the tension in Bill’s body.

He quickly ran through in his mind the topic for the Intellectual History seminar. He thought of whether he should just keep his mouth shut. “Maybe,” he thought, “maybe I should just go home and skip.” But then he remembered how many classes he’d already missed. It wasn’t an option.

In the seminar room, the prof and most of the students were already seated. The professor, Dr. Hamowy, was a short man, but he compensated for his stature with an antagonistic personality and sharp tongue. He gloried in debate and loved the thrill of the attack.

Bill took his place at the end of the long table, opposite Hamowy. With two minutes left, Bill quickly reviewed the book to be discussed. A couple more students drifted in – it was time.

“Okay, today we’re looking at Dostoevsky. You guys’ll like this. Always creates a good debate. Who’s giving the introduction? Miss Hogan? All right, go ahead.” 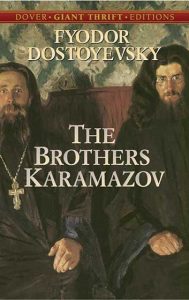 Hogan launched into it. Bill had heard her talking with some of the other students and she mentioned something about going to a Lutheran church. Could she be a Christian? Bill listened intently. Not a word about Dostoevsky and Christianity.

“Thanks, Miss Hogan, but that was rather superficial. I’m wondering, why didn’t you mention anything about Dostoevsky and Christianity?”

“Miss Hogan, did you even read the book?”

“Sure, but I didn’t really see anything religious.”

“Miss Hogan, next time you better do a closer reading of the book. If you’d thought about it or even done some research, you’d see we can’t understand this thinker apart from religion. Come on guys, get your act together.”

The first part of the class was over. It was now completely dark outside. “Okay, let’s get the discussion going here. We’re especially interested in what Dostoevsky has to say about the problem of evil. You’ve read the book, so you should know that Dostoevsky approaches the problem religiously. Open your books to page 240 and we’ll start reading that second paragraph and go to the end of the following page. Mr. Kosinski, could you read it for us?”

Bill opened his copy of The Brothers Karamazov and followed along. Ivan was complaining to his brother Alyosha:

“People sometimes talk of bestial cruelty, but that’s a great injustice and insult to the beasts; a beast can never be so cruel as a man, so artistically cruel. I’ve collected a great deal about Russian children, Alyosha. There was a little girl of five who was hated by her father and mother…”

Ivan went on to describe how this little girl had been horribly abused by her parents. He concluded by asking Alyosha if he would design the world in such a way that little children suffer so terribly.

Kosinski stopped reading and looked up. Hamowy started the discussion. “Okay, what’d you guys think of this?”

“Come on, somebody must be thinking in this room!”

More silence. Bill felt his stomach tighten more. He leaned against the table and slightly pulsated back and forth with the rhythm of his thumping heart. One of the other students raised his hand.

“Yeah, this book pretty much nails it right on. How could anybody believe in God when there’s so much evil in the world? Think of the Holocaust, all those Jews dying, where was God then? How could anyone believe in a powerful good God who could control all this evil, but doesn’t?”

“Thank you, Mr. Bosley. Anyone else? Surely you don’t all agree with Mr. Bosley?”

It was time for Bill to strike. He slowly raised up his hand, but Evans beat him to it.

“I agree. Believing in a good God in a world where there’s suffering is completely illogical. I don’t get all these god-freaks. Are they even thinking with their brains? We aren’t going to get anywhere in dealing with evil as long as those brain-dead ideas are around. We’d be better off with something like when we’re all god and we all work together.”

“All right, thanks Miss Evans. There seems to be a consensus developing. What’s wrong with you guys? Mr. Gordon, I saw your hand. What do you think?”

Finally, Bill had his opportunity. “It intrigues me that everyone agrees there’s such a thing as evil and wickedness.” Bill’s heart beat faster and harder and his voice trembled. “I’d like to just ask a question to all of you: can we all agree that sexually abusing children is absolutely immoral?”

Most students nodded their head in agreement. Only Bagchee didn’t.

“Mr. Bagchee, you disagree with Gordon? Why?”

“Well, there may be some societies where adults having sex with children is completely normal. In my country, in some of the cultures, it was at one time custom to make mothers sleep with their boys. In other cultures, teenage girls must be deflowered by tribal leaders to prepare for their arranged marriage.”

Hogan couldn’t restrain herself. “I think that’s completely disgusting! Sexual abuse is wrong no matter what!”

Dr. Hamowy smiled as the class finally heated up. “Miss Evans, you have something to add?”

“Yeah, Subhash you can say that about your country or other cultures, but what if part of their culture was to smash their children’s head against rocks while sexually abusing them, would that be okay too? And what if it was you or your child?”

“Mr. Gordon, where’d you want to go with this?

“Well, pretty much everyone agrees there’s an absolute moral rightness or wrongness to certain things, like sexually abusing children or brutally murdering them.” Bill’s voice was quivering again. “But when you ask how can there be a God with so much evil in the world, you’ve missed the hidden assumption in your question – that there is such a thing as evil. And the fact that you get upset about evil in the world shows that in your hearts you know there is such a thing as absolute good and evil. But when you deny the God of Christianity, you deny the possibility of there even being absolute right and wrong. Apart from God, morality is an individual or cultural matter, and like Subhash’s examples, sexually abusing children could conceivably be acceptable. But we’ve agreed that it’s absolutely not. When you ask the question, you’re stuck. You’ve betrayed yourself and the real nature of your problem with Christianity.”

“Umm, thanks Mr. Gordon. Okay, what’d the rest of you think of those comments?”

Bill thought carefully for a moment. “Joe, you just said God is all-good and I completely agree with that – it’s found in the Bible. His character defines right and wrong. God is all-good and because I’m a Christian, I look at everything in the light of that. And so when I see evil, I can be consistent by inferring God has a morally good reason for the evil we see around us. Any evil we see must somehow fit with God’s goodness. Look at Jesus for example. Jesus was crucified. It was an act of evil – he was 100% innocent. But the cross fit in with God’s good plans to rescue those who’d believe in him. God therefore has a good reason for the wickedness in the world and there’s no contradiction. It all fits.”

Bill took a long deep breath and carried on. “But within the non-Christian way of looking at the world, you can’t justify your contradiction between having absolute moral standards and not having an absolute source for those standards. If all we are is ooze, what difference does it make if one glob of ooze sexually abuses another glob of ooze? Who cares? Only with Christianity can absolute standards of good and evil have any meaning. And I think that was the point Dostoevsky was trying to make too.”

“Okay, thanks Mr. Gordon. Anyone have anything to say? Mr. Bosley?”

“Yeah, this is stupid. What about the influence of Dostoevsky on feminist scholarship?”

The rest of the seminar rambled in inanities. Bill’s heart rate and blood pressure were still coming down 20 minutes later when the class ended. As he got up to leave, he tried to make eye contact with some of the other students. He made his way out and walked down the hall of the history department. Hogan came up behind him and stopped him. “Bill, I really liked all those things you said. That was really good.”

Bill walked away wondering why no one ever spoke up in class to support him. As he stepped out into the chilly darkness, he still felt the aching of his chest and the tightness in his stomach. The only thing not bothering him was his conscience.

Dr. Bredenhof blogs at yinkahdinay.wordpress.com where this first appeared.

by C. John Miller & Barbara Miller Juliani 182 pages / 1997 This is the true story of a prodigal that came back. Barbara Miller, seemingly ou...